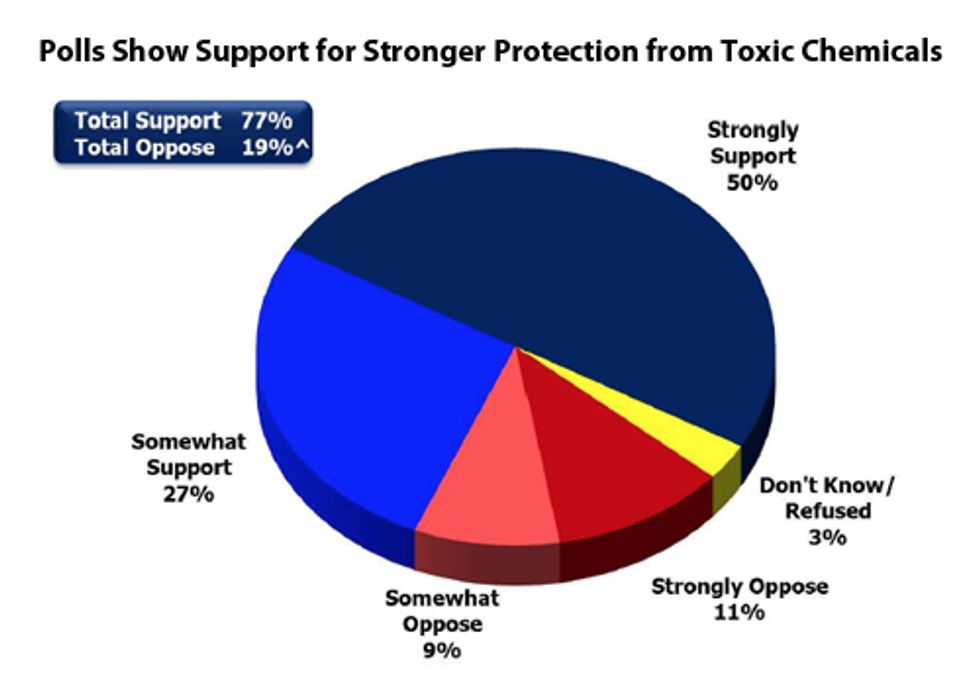 This pie chart is from the Public Opinion Strategies national survey of voters regarding their perceptions of government regulation of chemicals.

“Americans of all stripes have real concerns about the toxic chemicals we are exposed to every day and the serious health problems they cause," said Daniel Rosenberg, director of NRDC's toxic chemicals reform project. “Protecting us from chemicals linked to cancer, learning disabilities, infertility and other health problems should be a top priority for Congress. This really can't wait."

NRDC and the Safer Chemical Healthy Families coalition strongly support the Safe Chemicals Act, S. 847, introduced by Sen. Frank Lautenberg, D-N.J. The bill updates TSCA by requiring manufacturers to show that their chemicals are safe in order to sell them. It also streamlines the Environmental Protection Agency's (EPA) ability to limit uses of a chemical that may harm public health or the environment.

“As the Senate moves closer to a vote on the Safe Chemicals Act, Senators should keep in mind that the partisan divisions that wrack Congress do not reflect the views or desires of the American people," said Andy Igrejas, campaign director of Safer Chemicals Healthy Families.

“Even when we presented robust arguments on both sides of the issue, those we polled continued to side with supporters of reform," said Lori Weigel, a partner at polling firm Public Opinion Strategies, who conducted the national poll for NRDC.

Meanwhile, separate polls conducted by The Mellman Group for the Safer Chemicals Healthy Families Coalition in Nevada and Missouri found:

“There is a rare depth of public support for tackling the issue of toxic chemicals that crosses party lines," said Mark Mellman of the Mellman Group, who conducted statewide polling on the issue in Nevada, Missouri this month and Montana, Ohio, Wisconsin and Pennsylvania in 2011.

Finally, a Michigan poll conducted by POS with Greenberg, Quinlan, Rosner Research for Ecology Center in Michigan found 74 percent of respondents supportive of legislation described to increase EPA's authority to regulate chemicals and require chemical companies to prove that their products are safe. The poll also found 61 percent of respondents were extremely or very concerned about the health impacts from toxic chemicals in the Great Lakes, and 32 percent were somewhat concerned. A mere 6 percent were not concerned.

"The findings of this poll demonstrate that Michiganders support a change in the way our nation deals with toxic chemicals," said Rebecca Meuninck, campaign director of the Michigan Network for Children's Environmental Health. "Michigan residents are concerned about the impacts toxic chemicals have on their health and the health of the Great Lakes."

Further information about the polls can be found below:

Missouri and Nevada Polls (along with results from OH, WI, PA and MT conducted by the Mellman group for Safer Chemicals Healthy Families in 2011)

About the polls: For the national poll, Public Opinion Strategies conducted a telephone survey of 800 registered voters nationwide. The survey, conducted June 25 through June 27, 2012, has an overall margin of error of +/-3.46 percent nationwide.