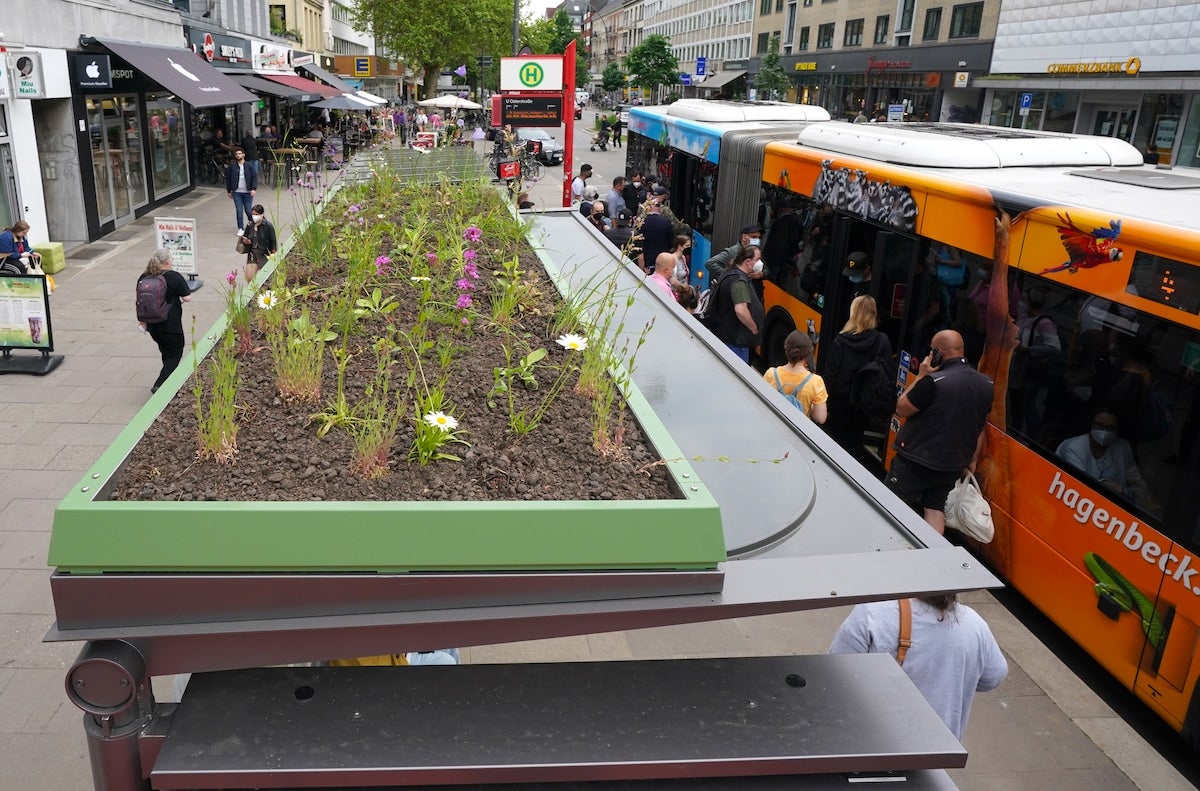 Across Europe, more and more bus stops are sporting a new look — with lush green roofs designed to support pollinators. The number of bus stops topped with pollinator gardens is expected to increase another 50% in the UK alone by the end of this year.

The “bee bus stops” began popping up in Utrecht, Netherlands in 2019, with over 300 bus stops receiving the makeover. In addition to adding pollinator-friendly plants on top of the shelters, the city also introduced bamboo benches and LED lighting to the bus stops along with more electric buses. Since then, the idea has spread across Europe, and other places are inquiring about the pollinator gardens, too.

“We want to do it in as many cities in the UK as possible,” said Louise Stubbings, creative director at Clear Channel UK, as reported by The Guardian. Clear Channel UK manages around 30,000 commercial shelters.

The bus stops have to be redesigned and carefully built to support the added weight of soil and plants, so the company is only adding green roofs to bus stops that need replaced entirely, rather than tearing out bus stops that remain in good condition. Most bus stops have a life span of about 20 years. Clear Channel UK is planning to install another 1,000 “bee bus stops” in the UK.

The company is working with wildlife trusts to plant native plants and maximize the benefits of each bus stop green roof for local pollinators. Some of the most recent bus stops are being installed in Sunderland to help boost biodiversity and relieve the urban heat island effect common in cities.

“In addition to our reintroducing wildflowers across Sunderland’s parks and cemeteries, these new Living Roof bus shelters are another way that we are supporting the pollinators like bees and moths, which are so important for a biodiverse ecosystem but face threat due to loss of habitat,” Councillor Claire Rowntree, Sunderland City Council’s Cabinet member for Clean, Green City, said in a statement.

The green-roofed bus stops already exist in the Netherlands, Sweden and Denmark, and Clear Channel will be adding more in the UK, Belgium and France throughout this year. Countries around the world have been inquiring about the Living Roofs for bus stops, but they have also inspired homeowners and businesses to ask about green roofs for other structures, like garages.

“Bus stops are a great way of being very present in the city,” said Jo Smith, CEO for Derbyshire Wildlife Trust. “Everyone sees them, even if they’re not taking the bus, but walking or driving past. It’s a visible representation of the small changes we want communities, individuals and organizations to take in order to create more space for nature.”