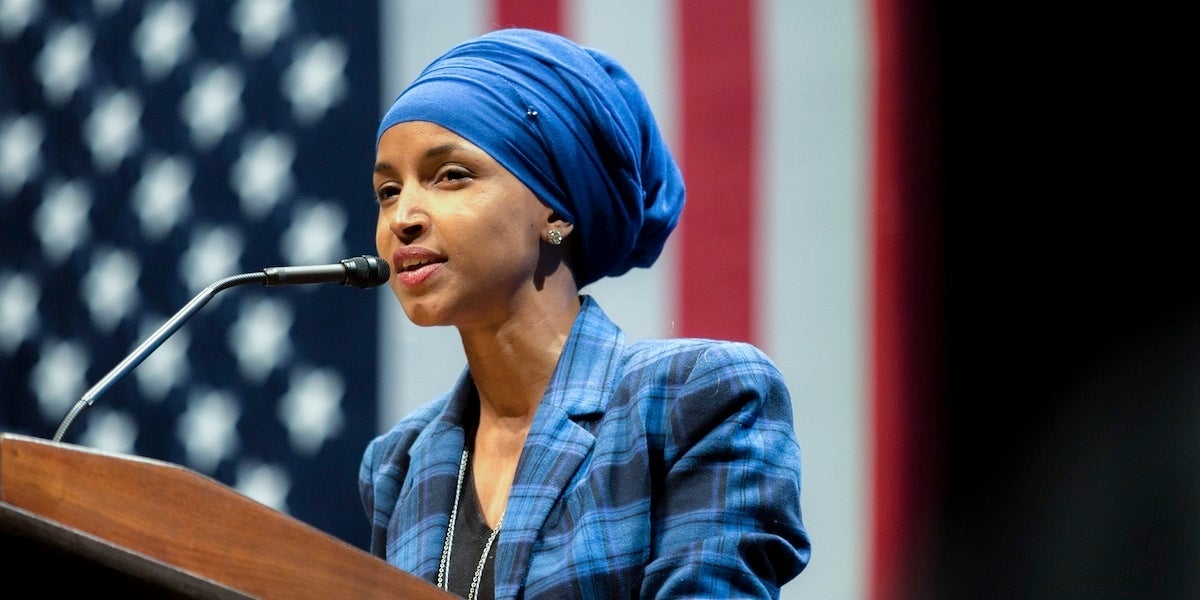 A number of high-profile winners even signed the
No Fossil Fuel Money pledge—an initiative of the young climate activist group Sunrise Movement—which demands politicians and their campaigns to not accept contributions over $200 from the PACs, executives or front groups of oil, gas or coal companies.

Here are some of the signatories who won last night:

Minnesota state Rep. Omar, who was also
endorsed by the Sierra Club North Star Chapter, promises “bold action, and a transformation of our political and economic systems to combat climate change” and opposes projects such as the controversial Line 3 Replacement Pipeline.

“She’s pledged to protect our land & water from
pipelines like Line 3 and support a just transition to a clean energy economy, creating good-paying jobs in the process,” the group tweeted about Omar’s nomination. “Our country will only change for the better because of candidates like you.”

The Sunrise Movement also
commended Bryce’s “tremendous victory” and noted that he “pledged early in his campaign to refuse contributions from fossil fuel CEOs.”

The populist union ironworker touts
A Green New Deal that supports policies such as a massive investment in green infrastructure, a path to 100 percent renewable energy by 2035 and ending fossil fuel subsidies.

There is no such thing as a safe pipeline. We need renewable energy alternatives now. #NoDAPLhttps://t.co/ZeVKa3pNwN

Hallquist, as the former CEO of Vermont Electric Cooperative for 13 years, helped transform the company into a leader in
using renewable sources of electricity production to combat climate change.

She also
supports a plan for the state to reach a 90 percent renewable energy supply by 2050, protecting its natural environment and waterways and encourages more environmentally friendly mass transportation options.

Congrats to @christineforvt on a resounding victory – she's a climate champ, signed the #NoFossilFuelMoney pledge, and is on track to be the nation's first trans governor! #vtpoli pic.twitter.com/nU6heHjKlz

Last night’s winners are among the some
200 candidates in the November general election who have signed the No Fossil Fuel Money pledge. The Sunrise Movement is petitioning other lawmakers to join their campaign.

Climate policy has emerged as a divisive issue between the Democratic Party’s progressive wing, which is urging a speedy transition to 100 percent renewable energy, versus those in the party who are sympathetic to labor groups.

Two months after the Democratic National Committee
unanimously prohibited donations from fossil fuel companies, the committee voted 30-2 on Friday on a resolution that critics say effectively reverses the ban.

The
resolution, introduced by DNC Chair Tom Perez, allows the committee to accept donations from “workers, including those in energy and related industries, who organize and donate to Democratic candidates individually or through their unions’ or employers’ political action committees” or PACs.

After the vote, Perez said that members of the labor community considered the original resolution passed in June “an attack on the working people in these industries,” per The Hill.

He insisted that the DNC is still committed to the Democratic Party platform, “which states unequivocally our support for combating climate change.”