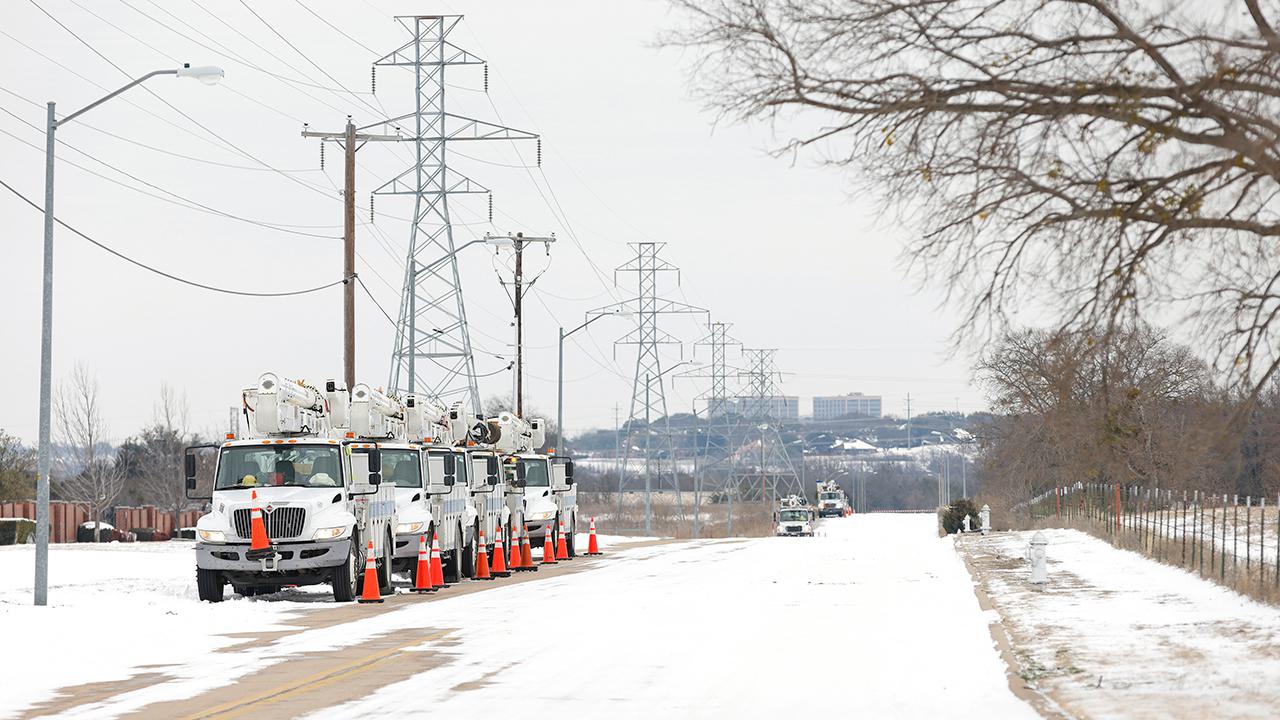 Pike Electric service trucks line up after a snow storm on February 16 in Fort Worth, Texas. Ron Jenkins /Getty Images

The Polar Vortex hitting much of the US has wreaked havoc not just on roadways and airports, but also on our electricity systems, as plenty are experiencing first-hand right now. Households, institutions, and communities across the region — and friends and family members — have been hit by power outages, and all that comes with them.

Here are six things to keep in mind as we make it through this.

First: Some things about all this we won’t know until we have the benefit of a few days — or months — of hindsight, and data. But one thing we do know right now is that electricity, which we so often take for granted, is crucial to so many aspects of our lives.

For some, power outages are an inconvenience. For others, they’re life-threatening. So keeping the power flowing, or getting it back up as quickly as possible, is key. Grid operators need to avoid affecting vulnerable populations and critical infrastructure as much as possible when they’re implementing rolling blackouts, and need to prioritize them when they’re restoring service.

While all confronting power outages or near misses are indebted to those working around the clock to keep things from getting worse, keeping crews safe is also key. Weather like this, combined with the ongoing pandemic, sure doesn’t make for the easiest working conditions, so utilities and grid operators will need to use really solid judgement about where they can safely focus people, and when, for any needed repairs.

2. The power outages are about both supply and demand.

Utilities and grid operators have been hit by the double whammies of unprecedented demand and big challenges on the supply side. On the demand side, for example, Texas on Valentine’s Day shattered its previous winter peak record by almost 5%. The peak was 11,000 MW above what ERCOT, Texas’s electric grid operator, was projecting and planning for as of November — some 15-20 good-sized power plants’ worth.

And on the supply side, power lines taken out by the weather are a piece of it, as you’d expect. But it also turns out that all kinds of power plants have gone offline, for a range of reasons. Take natural gas, for example:

Gas plants suffer from their own supply-and-demand issues. One piece of it is the fact that the same gas that supplies them is also needed for heating homes and businesses. And if a power plant doesn’t have firm contracts to get gas when it needs it, the way gas utilities would, the power plant loses out. The laws of physics may also be coming into play, as any moisture in the gas lines succumbs to the extreme cold and gums up the works—valves, for instance.

And indeed, initial indications are that a lot of the lost capacity is natural gas-fired. Data from Southwest Power Pool (SPP), the grid operator for much of the Great Plains, show that 70% of its “outaged” megawatts (MW) were natural gas plants.

ERCOT, which is powered primarily by natural gas and wind, was warning yesterday that “Extreme weather conditions caused many generating units — across fuel types — to trip offline and become unavailable.” It clarified elsewhere, though, that the majority of the capacity it had lost overnight was “thermal generators, like generation fueled by gas, coal, or nuclear”. In all, Texas was out more than a third of its total capacity.

4. Don’t think an “all of the above” strategy would have saved the day.

As ERCOT’s messages suggests, this isn’t just a gas issue, and these last few days should in no way be fodder for the type of fact-free “all of the above” pushes favored by the prior administration.

For example, many power plants, including all nuclear plants, virtually all coal plants, and a lot of natural gas plants, depend on water to cool the steam that drives the electricity-producing turbines. Any power plant dependent on cooling water will run into trouble if that cooling water is actually frozen solid. And they can have their own troubles with fuel availability during extreme cold.

(While we’re on the subject of fossil fuels: Note that the extreme weather has also hit oil production, with the Permian basin, for example, down an estimated 1 million barrels a day.)

5. Wind turbines can be winterized (but Texas…?).

Wind turbines aren’t immune to extreme cold, and initial reports show that they, too, have been hit by this wave. In SPP, wind was the #1 source of electricity last year, and initial data from yesterday suggested it accounted for almost a fifth of the capacity taken offline.

But wind farms going offline appears to be a much smaller piece of the picture than detractors will suggest. And wind power has played an important role in keeping the lights on in past extreme cold events (remember the Bomb Cyclone?). They can also be at least partially winter-proofed — by hardening the control systems, using the right fluids, and de-icing the blades. But if you don’t see weather like this coming…

6. We need to be ready for more extreme weather.

And that’s one of the lessons to learn from this episode, once we get beyond the immediacy of it all: Past performance is no indication of what’s going to be coming at us. We know that climate change is bringing not just overall warming, but also more extremes at both ends. We also know that there are all kinds of ways that climate change affects our ability to keep the lights on.

So we need to be ready, or readier, for situations like this. And it turns out that there are a lot of ways we can be. Stronger transmission links can allow regions to back each other up when they aren’t all facing the same challenges at the same time. A diversity of (clean) power options can mean some might be available even when others aren’t. (ERCOT anticipated yesterday morning being able to reconnect customers later that day in part because of “additional wind & solar output”.)

We also don’t have to take electricity demand as a fixed, can’t-do-anything-about-it quantity. Utilities (including mine, a few days ago) called on customers to be as efficient as possible to get us past the latest crunches. Programs put in place ahead of time can reward customers for delaying or shifting their electricity use.

And energy storage can be an important middleperson between supply and demand, from the large scale all the way down to battery packs in our garages and basements.

Getting through this, and beyond

Right now, the task is getting the power back on. Longer term, the goal shouldn’t be about ensuring 100% reliability (because of the prohibitive cost of removing that last fraction of a fraction of a possibility of a blackout), but to make them as infrequent and as limited in duration as possible. It should, though, be about making sure we make decisions that serve us well in the short term and, in the face of climate change, in the long term.

Blackouts will happen; that doesn’t mean we’re powerless against them. The need is there, but so are the tools.