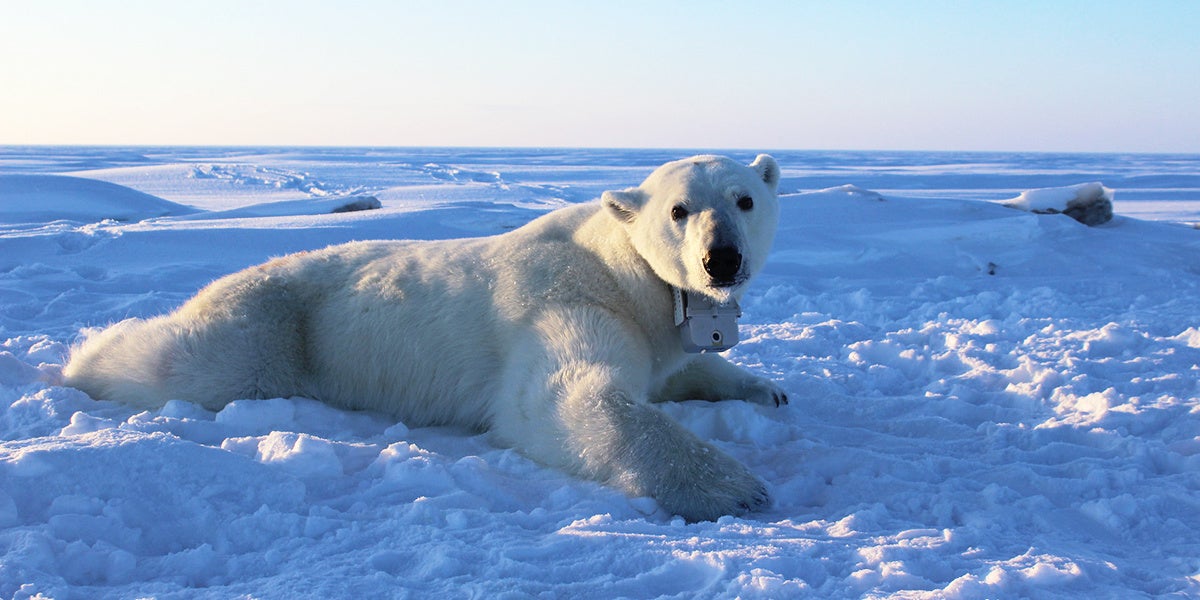 Polar bear with a GPS-equipped video camera collar, on the sea ice of the Beaufort sea. Anthony Pagano / USGS

A study tracking the behavior of nine female bears from 2014 to 2016 over the Beaufort Sea found that some of the animals exerted so much energy during the hunting season that they lost up to 10 percent of their body mass in an 8-11 day period.

Polar bears live on a diet made up of ringed seals, which they hunt from the ice surface. However, sea-ice cover in the Arctic is falling at a rate of 14 percent per decade. This may be forcing some polar bears to travel further in order to find their prey, the authors of the new research say.

Female bears who lose large amounts of weight during the spring hunting season could find it more difficult to raise their cubs to maturity in the following months, the lead author told Carbon Brief.

However, it is not yet clear how such changes could be affecting the long-term survival of adult polar bears, he added. 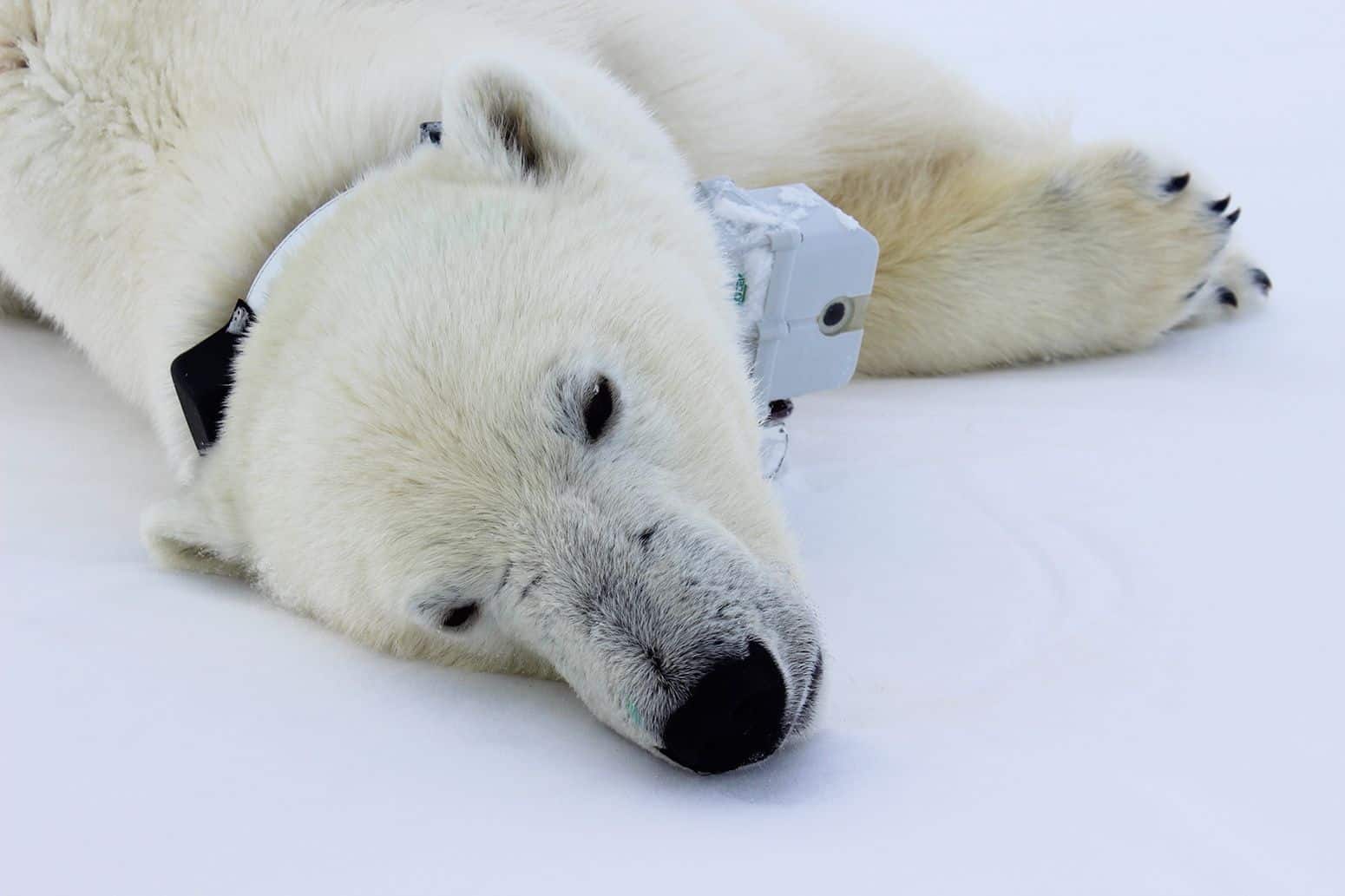 Polar bear with a GPS-equipped video camera collar, lying on the sea ice of the Beaufort sea. Anthony Pagano / USGS

Polar bears live across the Arctic and spend the spring and early summer months hunting ringed seals, which provide the animals with a high source of energy and fat.

When autumn arrives, pregnant bears will enter the “denning” season. At this time, females will build themselves a maternity den out of snow, which is where she will give birth to her cubs and nurse them until the following spring.

Though previous studies have looked at the hunting activities of polar bears during the spring months, the new study, which was published in Science, has revealed these habits in striking detail.

The research followed the behavior of nine female bears living in the Beaufort Sea area for a period of 8-11 days at some point between 2014 and 2016.

To track the bears’ day-to-day activities, the scientists fitted the females with GPS-equipped video-camera collars and accelerometers. They chose to study females because male polar bears’ necks are “larger than their heads” and so they are unable to retain collars, according to the research team.

The video-camera collars allowed the researchers to collect a large amount of data, including how far each bears tends to roam across the ice, how much time they spend walking and swimming and how often they come into contact with other bears.

The camera footage also allowed the scientists to observe the techniques bears use when trying to hunt seals. Most of the time, polar bears catch their prey using the “sit-and-wait” tactic, said lead author Anthony Pagano, a PhD candidate at the U.S. Geological Survey (USGS) and the University of California, Santa Cruz. He told Carbon Brief:

“Polar bears walk around until they find a breathing hole that a seal is actively using and they’ll typically stay there, they’ll either sit down or lay down or stand, and they’ll wait at that breathing hole. In some cases, they wait for hours.

“If they detect a seal has come out to breathe, they’ll stand up on their hind legs, raise their bodies up into the air and then pounce through the water as a way to try to stun the seal. If they’re successful, they’ll try to grab the seal around the neck with their jaws and pull them out of the water.”

The video below shows the polar bears in action:

In order to collect this data, the researchers had to capture the bears at the start and end of the study period. Catching the bears required the team to track the animals using a helicopter, Pagano said:

“The easiest way to catch the bears is from a helicopter. It’s the safest method both for the bears and for the biologists. It’s also the best way to try to locate bears as well. Bears occur over a pretty extensive landscape and so locating the bears is a serious challenge.” 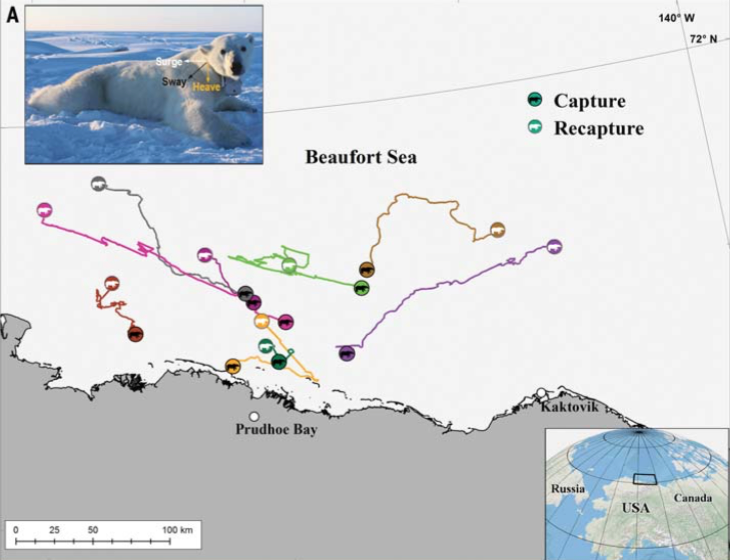 The data collected by the researchers suggest that polar bears are more active than previous research has suggested, Pagano said:

“Previous modellng work has tried to guess what a polar bear’s energy expenditure might be and how many seals they might need to capture. They speculated that, because polar bears use the ‘sit-and-wait’ hunting tactic, they would be able to conserve energy.

“What we found in the study is that the activity rates of these bears are very similar to other terrestrial carnivores, despite this sit-and-wait approach to hunting. They are still quite active and they are still traveling long distances.”

In fact, the study finds that polar bears burn energy at a rate that is 1.6 times that of what previous research has suggested.

However, the activity rates of the bears may have been affected by the capturing process, the researchers note in their research paper:

Using the new estimate, the researchers predicted that a solitary female bear would need to eat, on average, either one adult seal, three subadult seals or 19 newborn seal pups every 10-12 days to gain enough energy to maintain her current weight.

However, in the study period, more than half of the bears did not eat enough seals to meet their energy needs and subsequently lost body mass. Four bears lost more than 10 percent of the 8-11 day study period, with an average loss of 1 percent per day.

Previous research also shows that, in recent years, female bears have been more likely to enter the “denning” season with inadequate fat reserves than in previous years, Pagano said.

The rate of Arctic sea-ice melt over the spring and summer has been increasing in recent decades. Pagano suggests that this could be forcing the bears in the region studied to travel further to find food, and, therefore, be causing them to lose body mass at a faster rate than previously observed. He said:

“Once the ice returns in the fall and the winter, they’re following the ice back and making a long distance migration back to areas that are thought to have a higher variability of seals.”

Losing weight during the spring months could leave female bears without the adequate resources needed to raise their young in the “denning season,” Pagano said, which could be causing declines in cub survival:

“Some work has shown that they are emerging from their dens in lower body condition and they are not able to locate as much food as they have done historically. Basically, they’re not able to provide for their young at an adequate level and that’s driving declines in cub survival.”

The threats facing polar bears in this region are likely to worsen as climate change continues, he said:

“The concern is that as the ice breaks up earlier each year, the bears will be impacted in three ways: they’ll be less successful at catching seals because they’re being displaced from their primary foraging habitat earlier; they’re putting on less weight than they would have done historically; and then they’re also moving greater differences. If that trend continues, we would expect continued declines in reproductive success.”

However, it is less clear how these changes could impact the survival rates of adult bears, he added:

“From what we’ve seen so far there doesn’t seem to be large decreases in adult survival, it really seems to be a function of females to be able to produce offspring and successfully raise them.”

Research from the International Union for the Conservation of Nature (IUCN) polar bear specialist group shows that polar bear populations in the southern Beaufort Sea are “likely to decline” in the future. Carbon Brief has previously published an article examining how climate change could affect polar bear population numbers. 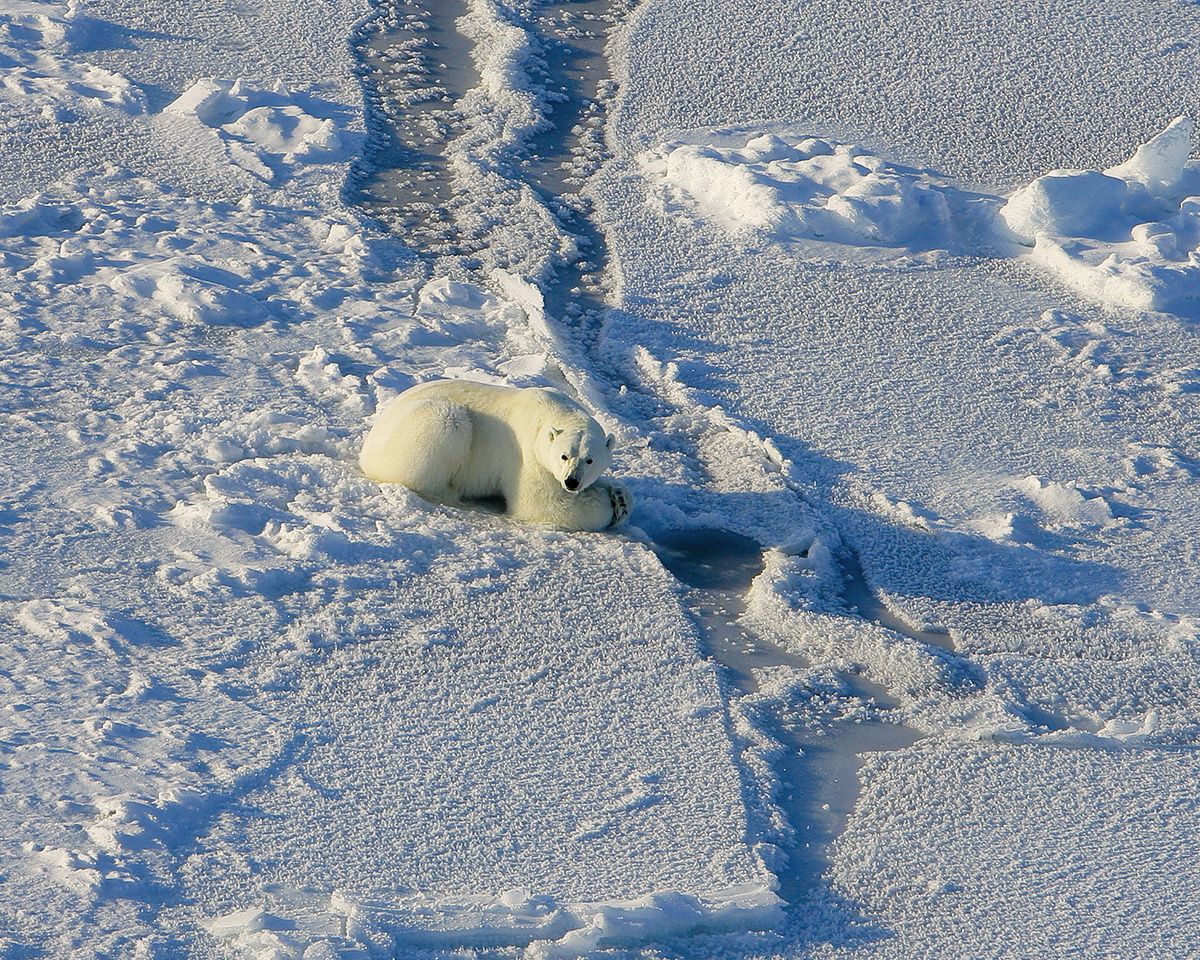 The findings could tell scientists more about how “polar bears are responding to climate change,” said Prof. Charlotte Lindqvist, a biologist from the University at Buffalo in New York, who was not involved in the research. She told Carbon Brief:

“The sample size is small, but what can you do when you sample rare and wild polar bears on the sea ice? If half of the studied bears are already showing signs of energy deficiency on the spring sea ice, we can only imagine a likely gloomy outlook for polar bears as sea ice continues to decline.”

The “major strength” of the research comes from the integration of several different methods to gain greater insight into the behavior of polar bears, said Prof. Andrew Derocher, a polar bear biologist from the University of Alberta, who was not involved in the current study. He told Carbon Brief:

“One challenge with the study findings is that we know that feeding varies widely over space and time with polar bears and the study period used was, by necessity, quite brief. Some of the results could be rather different a few weeks or a month later. However, none of this detracts from the study’s findings, but context is useful.”

The research highlights that the challenges facing polar bears are “complex” and scientists are “yet to fully understand them,” he added:

“Arctic sea-ice loss is a global issue and there is no quick fix: no protected areas, no habitat modification, or other standard conservation approach could significantly alter the threats facing polar bears in a warming climate. Only the reduction of greenhouse gases can slow the rate of loss of polar bear habitat and improve the conservation outlook for the bears.”