Polar Bears in Peril From Climate Change and Hunting 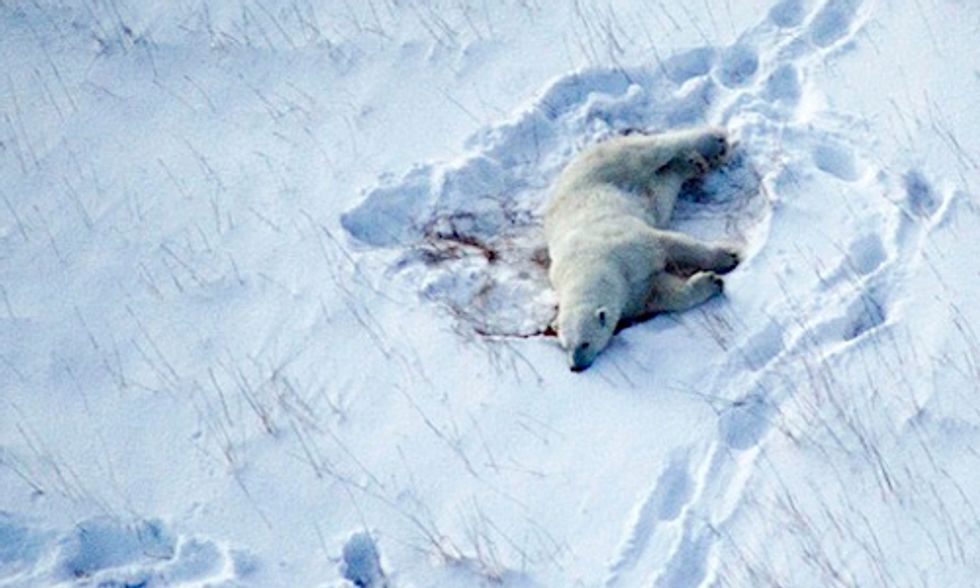 New data pointing to a dramatic rise in polar bear hunting surfaced this week as the biennial meeting of the international Polar Bear Agreement kicked off in Moscow, Russia. Clearly, climate change isn't the only challenge facing Polar Bears. Hunting of Canadian polar bears is rising at alarming rates—in excess of 10 percent over previous years, according to the Center for Biological Diversity.

“Global sentiment on this issue seems clear, as most every country has banned the trade and commercial export of polar bear parts,” said Elly Pepper, policy advocate for the Natural Resources Defense Council (NRDC). “Yet Canada continues to allow substantial harvest and trade. Their populations are perhaps key to the species climate change survival, making the country’s outlier stance all the more vexing.”

The heat-stressed polar bears in Hudson Bay, Canada dig holes in the dirt, trying to stay cool by lying on the permafrost below. Photo credit: Larry Schweiger / National Wildlife Federation

A forum declaration was signed yesterday by the five countries in the polar bear's range (Canada, Denmark, Norway, Russia and the U.S.) ensuring conservation efforts, but scientific experts at the forum warned of the immediate impacts of sea-ice loss on the species' survival, including loss of food sources. The parties agreed on the importance of addressing climate change and reducing additional stressors, like over-harvest, poaching and illegal trade as well as improving reporting and monitoring of legal trade. However, specific measures to implement the declaration remain unclear, reports the Center for Biological Diversity.

“Polar bears already face an enormous threat from climate change, and we absolutely must reduce greenhouse gas emissions to save the species,” said Sarah Uhlemann, international program director at the Center for Biological Diversity. “Adding overhunting to an already deadly situation is speeding up the polar bear’s extinction."

Despite the climate change challenges the species face, Canada has tripled its hunting quota and is proposing more quota increases. According to NRDC, 740 polar bears were shot by hunters in Canada in 2012—almost 80 more than the average over the previous five years. Scientists continue to predict that two-thirds of polar bears will be lost by 2050.

The bears experiencing sea-ice loss in Hudson Bay, Canada, live toward the southern edge of the polar bear's range and serve as a warning for polar bears further north, if climate change is not considered in policy. Photo credit: Larry Schweiger / National Wildlife Federation

“Polar bears need protection from skin sellers and marketers,” said Teresa Telecky, director of wildlife at Humane Society International. “We cannot stand by while polar bears are sold off to the highest bidder.”

Prices for polar bear hides have skyrocketed. They have quadrupled since 2007 to $22,000 USD for a single hide—doubling in the last year alone, according to the NRDC. Demand for polar bear skins is also growing—particularly in China where skins sell for up to $80,000 USD each.

“Canada’s own scientists are raising alarm about over-harvest not only in the past year but in the past three to five years," Telecky continued. "Canada and the other parties to the Polar Bear Agreement urgently need to address this problem.”

While the forum's conservation declaration will help with managing polar bear habitat and with direct threats to the bears, these implementations can only go so far, according to the World Wildlife Fund (WWF).

“The Arctic States' response goes some way toward guaranteeing a future for these magnificent animals,” said WWF International Director General, Jim Leape. “I urge them to redouble their efforts to ensure we meet the challenges of the next forty years—by implementing the circumpolar action plan for the bears and taking action on climate change.”

According to the International Union for Conservation of Nature, the declaration outlines these key actions:

“We welcome all the commitments made today,” said Geoff York of WWF. “But we will also be watching to see that they are backed by action."

If policy is not strictly enforced, the polar bear faces total extinction—especially if the world fails to act on climate change.