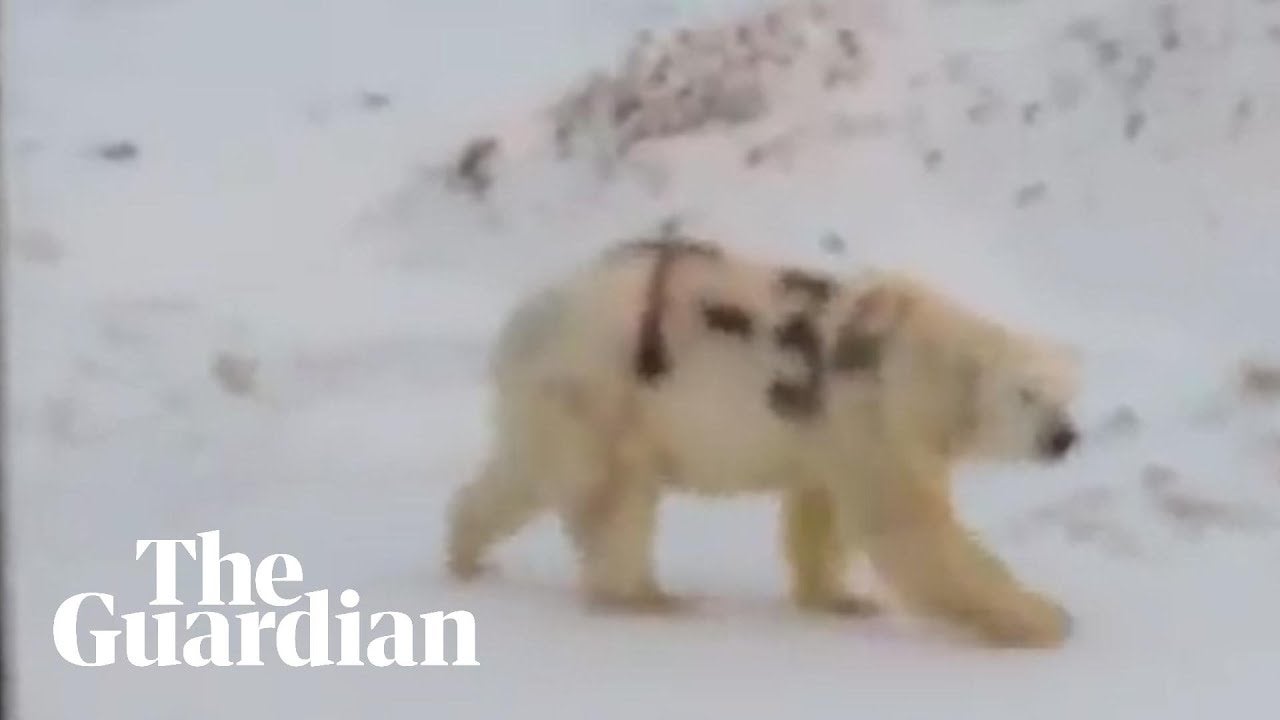 A video of a polar bear wandering around the Russian Arctic spray-painted with large numbers and letters has baffled and worried wildlife experts.

The footage, shared on Facebook Sunday by World Wildlife Fund (WWF) worker Sergey Kavry, shows the bear walk by with “T-34” sprayed in large black letters on its right side. The T-34 is a World War II Soviet tank, and some Russians paint its name on their cars during Victory Day celebrations in May, according to The Guardian.

“Why?!” Kavry wrote in a Facebook post, according to The Guardian. “He won’t be able to hunt without being noticed!”

Kavry wasn’t the only one surprised and concerned by the video. WWF Russia press officer Daria Buyanova told BBC News that the footage was “quite a shock.”

Even the people filming the video seemed surprised, according to a translation and summary provided by The Siberian Times:

Why is it so dirty?’ one of them asks as the recording begins.

‘A spotty bear?’ answers another, before realising there was writing on the predator.

We had to beep the rest of the recording due to the Russian expletives.

Kavry said he first received the footage from a WhatsApp group for the indigenous people of the Far Eastern Russian region of Chukotka, according to BBC News. However, he does not know where or when it was actually filmed. Experts are now trying to find out.

Anatoly Kochnev, a scientist at the Institute of Biological Problems of the North, said it could take weeks for the paint to wash off. Until it does, it could be more difficult for the bear to capture prey, since it relies on its white coat for camouflage.

Kochnev said the bear would likely have needed to be sedated for quite some time in order for someone to spray the letters so evenly.

‘Scientists could not do this,” Kochnev told Ria Novosti news agency, according to The Siberian Times, adding that it could have been a “joke.”

Kochnev speculated further that the spray paint could have been related to recent “turmoil with polar bears” in Russia’s Novaya Zemlya region. In February, authorities declared a state of emergency in the far north archipelago after more than 50 hungry polar bears entered human homes and buildings. The climate crisis has melted sea ice, forcing polar bears to wander into human settlements in search of food.

“[P]erhaps they took some measures ahead of the upcoming winter by catching and immobilising bears,” Kochnev said.

Russian media also thought the spray paint might be a reflection of local anger over the increased presence of bears in human areas, BBC News reported.

If the spray-painting is a reaction to polar bears entering human settlements, it could backfire, Kavry speculated. In his Facebook post, he wrote that hunger could lead the bear to die, or harm others.

“It will enter villages,” he wrote.