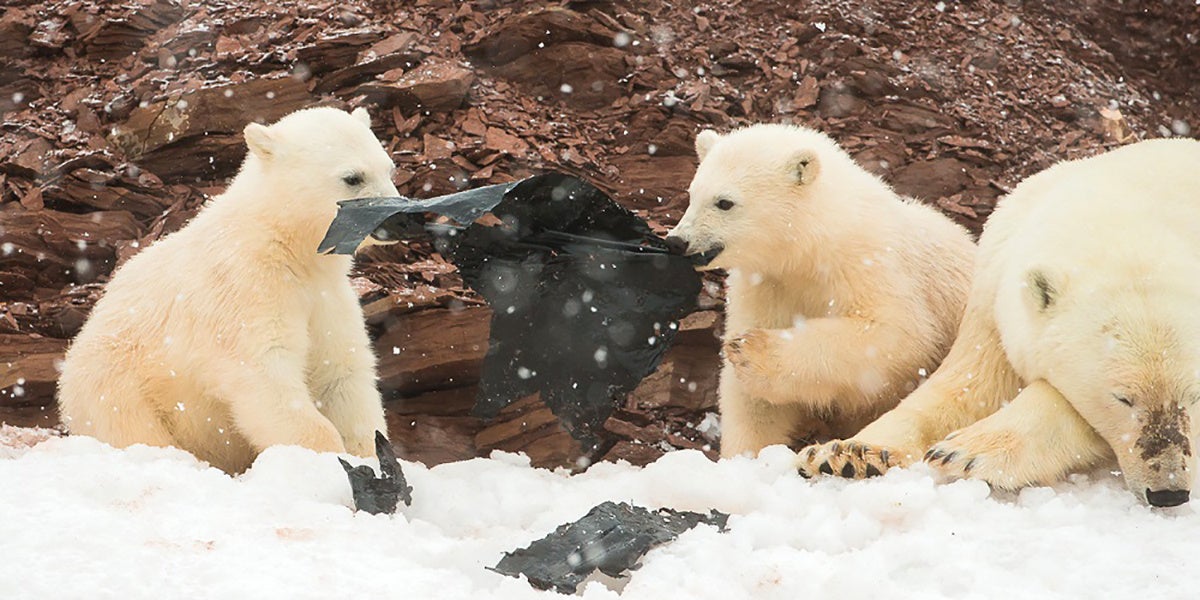 Plastic bags are often stamped with an all-caps warning: This bag is not a toy. Unfortunately, polar bear moms don’t have much control over their kids’ playthings.

British wildlife photographer Kevin Morgans recently spotted this polar bear and her boisterous cubs while sailing through Liefdefjorden, a fjord in Norway’s Svalbard archipelago. The furry twins played tug-of-war with a black plastic bag, chewing it to bits. For Morgans it was a “bittersweet moment,” with the thrill of observing bears up-close tempered by the ugly intrusion of trash.

Morgan’s sighting was a glimpse into a deepening crisis. Roughly 8 million metric tons of plastic junk wind up in the ocean each year. Much of it, like the plastic bag the cubs had found, is designed to be used just once and thrown away. Plastic is thought to persist for centuries in the environment, breaking down into ever-smaller pieces instead of biodegrading.

These tiny scraps, beads and fibers might pose an even more pernicious threat than the plastic we can easily see, like bags and bottles. Plankton and filter-feeding fish often mistake so-called “microplastics” for food. Once swallowed, plastics can release industrial chemicals into the critters’ bodies. Fat-soluble poisons accumulate with each step up in the food chain, eventually posing grave dangers to long-lived predators like polar bears and orcas.

Scientists are still in the early stages of understanding the full scope of the ocean plastic crisis. But one thing’s for certain: As the Svalbard cubs’ world melts around them, the last thing they need is a sea—and prey—full of trash.