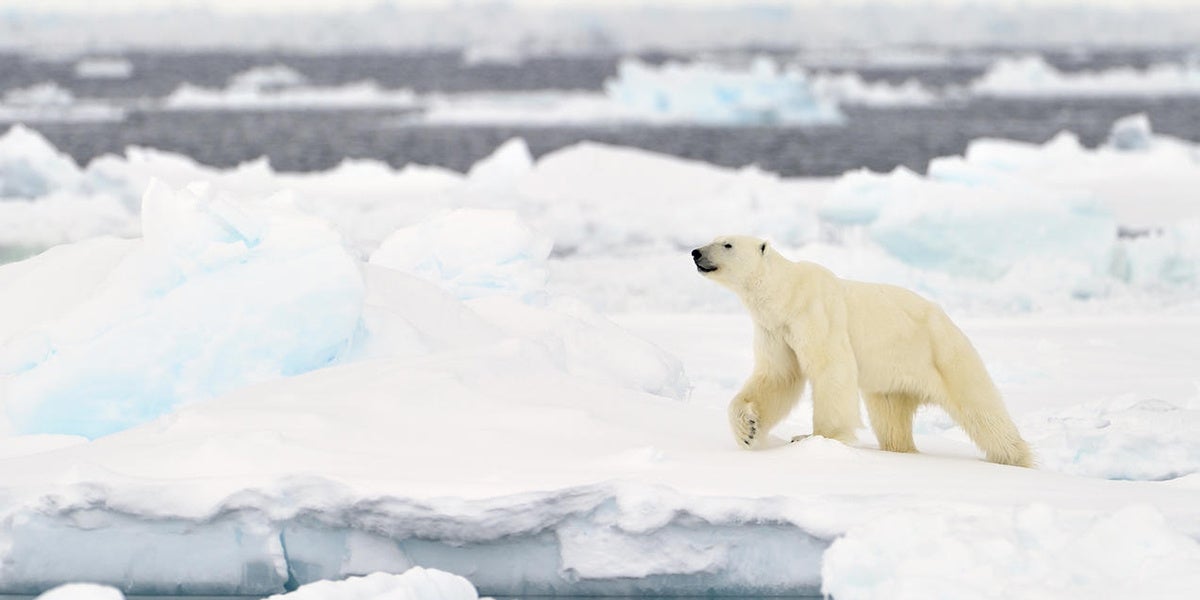 Twenty years ago, polar bears made people think of Coca-Cola. Ten years ago, the bruins became the face of climate change because their melting Arctic ice habitat perfectly captured the dangers of a warming world. More recently, as a direct result of the bears’ environmental poster child status, science deniers have begun using them in attempts to turn the argument for climate science on its head. But now, there’s no way to talk about polar bears without talking about one particular viral video.

You probably saw it. A bear, staggering with weakness from advanced starvation, with loose skin, wispy white fur, frothing mouth—there’s no doubt that the video, captured by photographer Paul Nicklen and filmmakers from the conservation group Sea Legacy, is a tough watch. In the National Geographic version, the first subtitle makes the video’s implications clear: “This is what climate change looks like.”

Why? Because climate change is projected to sap the Arctic of its characteristic sea ice. And without ice, polar bears can’t get to the fatty seals they’ve evolved to eat.

But is the video really the slam-dunk indictment of a warming world that it appears to be? Well, yes and no.

“The polar bear in the image appears to be starving,” said Geoff York, senior director of conservation at Polar Bears International. But York said that for this individual bear, there’s no way to know exactly what’s causing that starvation. The factors could range from old age or injury to disease or some other unseen complication that has prevented the bear from catching prey.

In the bigger picture, though, the message is correct, he said. “Is this what reduced survival looks like? Absolutely. Is that consistent with what we expect to see more frequently in a warming world? Yes.”

But taking a closer look at the video reveals something different about the polar bears’ food supply and its connection to climate change. Andrew Derocher, a polar bear scientist at the University of Alberta in Edmonton, noted that while the video was released as the first snows drifted across the Northeast this December, the footage was shot in the summertime. And during that season, he sees bears that look like this all the time.

You see, polar bears live a life opposite that of most animals—winter is their bread and butter. While some birds fly south to warmer climes and squirrels and bats log off for a few months of hibernation, the great white bears of the north take advantage of the cold and the ice it brings to feast upon every blubber-rich body they can find. Ringed seals and bearded seals make up the bulk of a polar bear’s diet, and both aquatic mammals rely on sea ice for feeding, pupping, and resting. And so when summer rolls around each year and the sea ice recedes, the bears’ feast turns to famine. Some starve to death as a result.

It’s also worth noting that the bear in this video is an adult male, said Derocher, who wrote the book on polar bear biology and behavior. Sometimes these guys have, let’s say, different priorities. Prime feeding season coincides with prime mating season, so if a male past its prime is still investing tons of time and energy into pursuing females, he might just find himself courting to the point of exhaustion. “These males walk a fine line on the energy in versus energy out equation,” said Derocher.

In fact, York said the two most likely ways for an adult bear to die are either to get shot by a hunter or to slowly wither away to nothing. The thing is, there are generally considered to be 19 populations of polar bears scattered along the Arctic Circle. Most are exceptionally remote, and for this reason, we humans don’t usually witness their death throes.

Now, you might think that a viral video would be good for raising awareness about the issues this species faces. And indeed, many people who might not have initially felt invested in preserving the Arctic may now be thinking about that polar bear struggling to stand up the next time someone said climate change is a hoax.

But here’s the rub, as York, Derocher, and many of their fellow experts see it. Climate change is an enormous, complex problem that will affect the globe in different ways. And while we have tons of data that suggest a warmer Arctic will be terrible, horrible, no good, very bad news for polar bears, this one anecdotal account of a starving bear is just that, anecdotal. And when you pin a single bear to a phenomenon best understood by analyzing decades of climate, sea ice, and population data, well, you paint a pretty big target for science deniers to attack.

And attack they have. On a blog called Polar Bear Science, zoologist Susan Crockford—whose blog, a recent study determined, is the primary source for around 80 percent of other climate denier blogs—has seized on the polar bear video as evidence that climate change is intentionally exaggerated.

“One starving bear is not scientific evidence that man-made global warming has already negatively affected polar bears, but it is evidence that some activists will use any ploy to advance their agenda and increase donations,” wrote Crockford.

Half of her point—the part about over-extrapolating—is valid. But it would be unfortunate if that kernel of truth lent credibility to her other posts, which include snippets of studies that suggest polar bears are doing just fine. (Crockford has never studied polar bears in the field, nor published work about them in a journal; Derocher said, “She doesn’t seem to understand the ecology of the species that well.”)

One of the arguments Crockford and other deniers like to make is that polar bear populations have not yet collapsed, and that this is evidence that the bears can and will adapt to a lack of Arctic ice. And it’s true that the population hovers around 25,000 to 26,000 polar bears globally, as York estimates, though the information on Russian populations isn’t necessarily reliable. So it’s not as if we’re down to our last dozen or so polar bears, as we are with other endangered species like vaquitas or Attwater’s prairie chickens.

But the science indicates that the worst is yet to come.

The warmest year ever recorded in the Arctic was 2016, with record-low sea ice levels to match. And even if we manage to limit climate change to 2° C (3.6° F), some experts project that the Arctic could still go completely ice-free sometime this century. We’re talking about conditions the likes of which haven’t been seen in this region for some 1,500 years.

“All 19 populations of bears are seeing reduction in their habitat,” said Derocher. Three of these have experienced marked declines, and for many others we don’t have good enough data to make those assessments. But still, Derocher said there will come a point when the number of ice-free days reaches a tipping point and the populations will start to tank. Polar bears simply cannot survive without seals, said Derocher. And the only way bears can capture seals with regularity is with the aid of sea ice.

The trouble is that it’s very difficult to predict exactly when all of this will occur. This is why Derocher and others look at the situation on a scale of the next three generations. “In that time frame, it does not look good for polar bears over the vast majority of the Arctic,” he said.

While a few bears may be able to scrape out a living while eating a less than optimal number of seals, nothing the experts have seen indicates that polar bears can withstand these sorts of changes in the population. Down at the genetic level, the species is just too dependent on the high-fat marine mammal diet.

“I think that’s something that’s missed in the public discourse for climate scientists and for polar bear biologists. We would love to be wrong,” said York. “We’d love to find something to suggest, ‘Hey, everything’s not as bad as we think it is.’ But we’ve yet to find those things.”