How Poison Frogs Could Crush Addiction 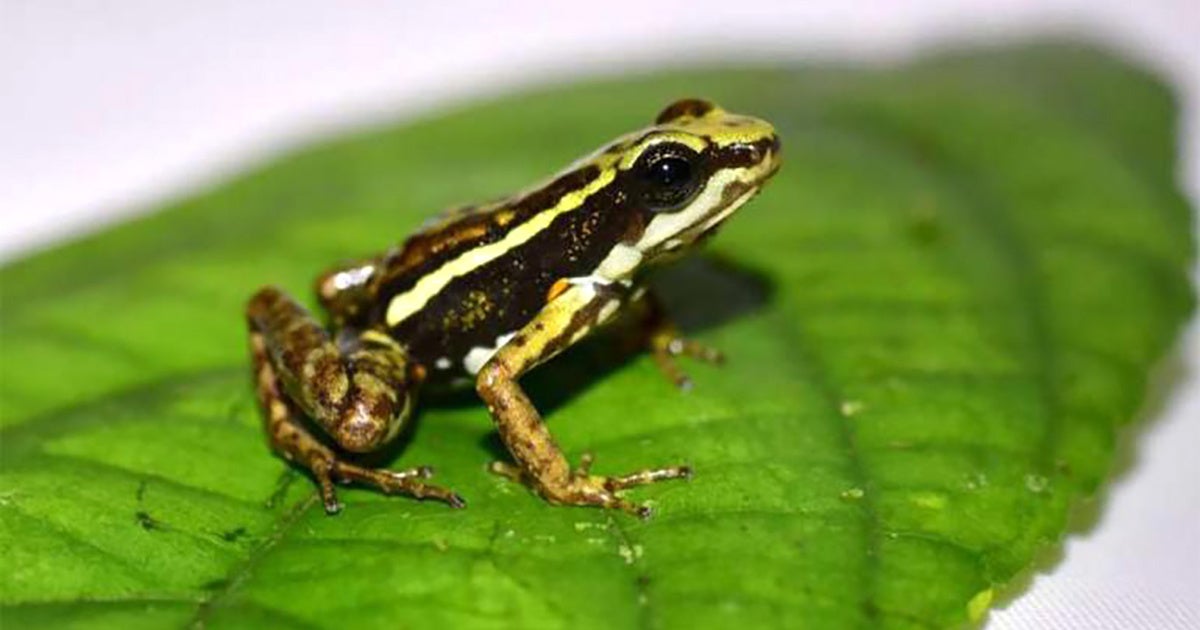 Poison dart frogs are some of the most brilliantly colored and beautiful animals on Earth. About one-third of the 300 species of the tiny frogs in the superfamily Dendrobatoidae are poisonous, including the golden poison frog, which may be the most toxic animal in the world.

While venomous animals, like snakes, sequester their venom in glands or pouches, the frogs’ poison is found in tissues throughout their bodies. Researchers have wrestled with that fact for a while: Why don’t poison dart frogs poison themselves?

Researchers at the University of Texas, Austin, recently tackled that question, finding that a slight genetic tweak gives some species immunity from their own toxins. While it’s an interesting insight, the research on chemical receptors could help scientists figure out new ways to treat chemical addiction in humans as well.

To investigate, postdoctoral researcher Rebecca Tarvin, lead author of the paper in the journal Science, and her team collected genetic material from 28 poison frog species, including some that were highly toxic and some that produced no toxins at all. They then sequenced a gene known to produce a certain receptor in the frogs. Using that data, they were able to produce an evolutionary family tree, showing that tiny changes in that gene—just 3 amino acids out of 2,500—gave poisonous frogs immunity from their own toxins.

Even more incredible, that immunity evolved independently among these frogs three separate times. “Being toxic can be good for your survival—it gives you an edge over predators,” Tarvin said in a statement. “So why aren’t more animals toxic? Our work is showing that a big constraint is whether organisms can evolve resistance to their own toxins. We found evolution has hit upon this same exact change in three different groups of frogs, and that, to me, is quite beautiful.”

The mutation basically prevents the frog’s receptor from recognizing its own toxin, an alkaloid called epibatidine. Receptors are specific proteins on the outside of cells that help them communicate with the rest of the body. The receptor acts like a lock. When the lock encounters a molecule that acts as a key, the receptor is stimulated, causing a response in the cells. For instance, the release of epinephrine stimulates certain receptors, causing a reaction that produces adrenaline when a person is startled.

In the case of poison frogs that get snacked on by a predator, their body releases epibatidine, which acts like a skeleton key that stimulates receptors throughout a predator’s nervous system, causing all sorts of reactions, including hypertension, seizures and if the reaction is strong enough, death. But the mutation in the frogs means the epibatidine can’t unlock its own receptors, making it inert.

Tarvin also worked with co-author Cecilia Borghese at the Waggoner Center for Alcohol and Addiction Research across the street from her lab. Borghese researches the way that drugs and chemicals stimulate receptors in the human body. The receptor that epibatidine affects in frogs, it turns out, also exists in humans; it’s the same receptor that nicotine works on, leading to addiction. Studying the ways the receptor in the frog has evolved to exclude the toxin could lead to new ways to help people quit smoking. “It gives us more insight on how these drugs are interacting with the receptors. It’s a very clear example how sophisticated the interactions are,” said Waggoner. “It’s not easy to model these interactions in a computer. So everything we learn about what modifies these drug interactions gives us information on how to design better drugs.”

This is the second frog toxin that Tarvin and her team have unraveled. In 2016, they found mutations that protect certain frog species from another toxin, batrachotoxin. But there’s still a lot of work to do. Tarvin said the frogs contain at least 500 different toxins, many of which have not been extensively studied, and may lead to new drugs and treatments. That is, if they have the time to study them before time runs out.

“Poison frogs, like all frogs, are under threat of extinction,” she said. “These are solutions that evolution has come upon over millions of years. There’s a lot of knowledge to share and it’s important that we conserve natural wild populations of animals because we don’t know what they’ll be able to tell us. None of these studies of wild animals are possible unless we preserve our biodiversity.”