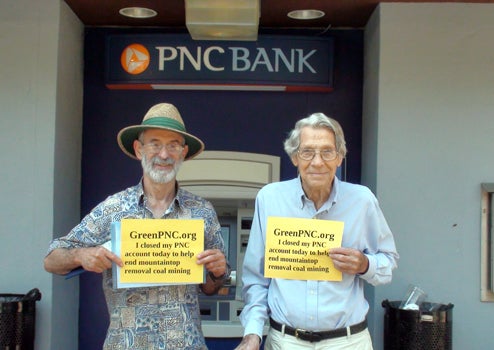 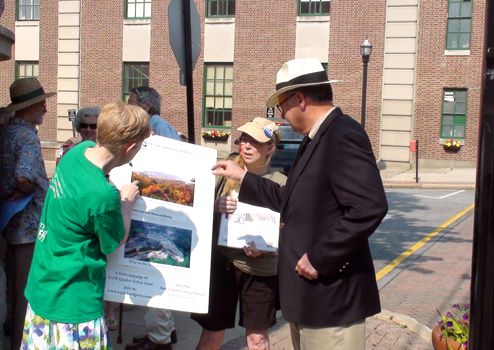 Eight prominent Quakers closed their personal PNC bank accounts, or announced their intention to withdraw, in protest of PNC’s continued financial support for coal companies that practice the devastating surface mining technique called mountaintop removal. Each of them were long-time depositors, representing more than 150 years as PNC customers.

“I have been deeply disappointed by PNC’s refusal to stop financing mountaintop removal mining, despite its claims to be a ‘green bank.’ Actions speak louder than words,” said Bruce Birchard, recently retired general secretary of Friends General Conference. A PNC customer since 1974, Birchard added, “If PNC pulls its investments out of these companies that so devastate our earth, it would be recognized as a leader among banks in the movement for corporate responsibility and environmental stewardship. I would then re-open my account.”

“Friends Schools teach young people about proper care for the earth and its resources, making communities safe and supporting sustainable living for families. Mountaintop mining certainly flies in the face of each of these. For this reason, I will be closing an account at PNC bank which I have had for over 30 years,” said Lynn Oberfield, former head of school at Media-Providence Friends School and the current clerk (chair) of Providence Friends Meeting in Media, Pa.

Allen Bacon, co-founder of efforts to restore Historic Fair Hill Burial Ground, said, “It is with genuine sorrow that I am closing my account with PNC after sixty- two years. The service has always been good, accurate and friendly. But mountaintop removal is threatening our future and that of our descendants.” 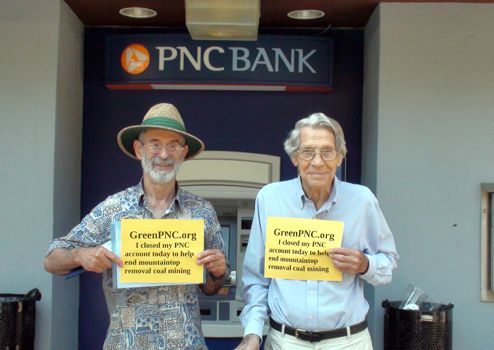 Parker Snowe, former clerk of Providence Friends Meeting, joined his colleagues in closing his PNC account of 20 years. “It’s a moral imperative that we not allow our financial resources to be used in violation of our moral principles. For me, this is something I felt called to do to live my life with integrity,” said Snowe.

The account closings were part of Green Your Money, a project of Earth Quaker Action Team (EQAT), a faith-based environmental group. Those closing their accounts were joined by 20 supporters who spoke with customers and passersby about the issue.

“This action ends just the first month of an ongoing initiative, part of our campaign to get PNC out of the business of financing climate change,” said Amy Ward Brimmer, EQAT executive director. “So far more than $2 million has been withdrawn from various PNC branches,” said Brimmer. “More people stand ready to go, and EQAT will continue recruiting both individuals and organizations to this cause until PNC establishes a meaningful policy against all mountaintop removal investments.”

Earth Quaker Action Team announced this initiative at a press conference on Feb. 29, giving PNC Bank 90 days to announce a change. EQAT completed a 17-day, 200-mile walk to PNC national headquarters in Pittsburgh to publicize the campaign and then started closing accounts with multiple actions across the region on June 1. In spite of several attempts to speak with PNC officials, the bank’s continued response is, “No comment.”