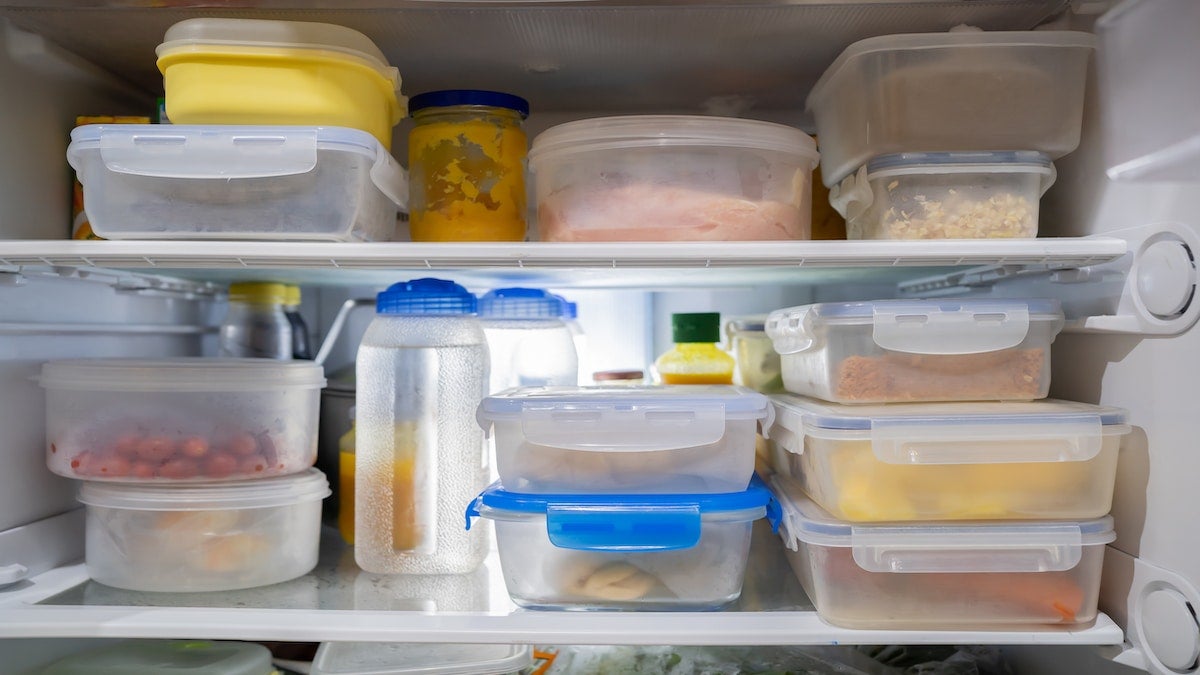 Chemicals that encourage fat growth might leach into our food via household plastics. Wachirawit Iemlerkchai

Is plastic making you fat?

It’s well known that plastics contain endocrine-disrupting chemicals like bisphenol A (BPA) and phthalates. However, a recent study published in Environmental Science and Technology found that these infamous chemicals may just be the tip of the trashberg. The researchers tested 34 common plastic products from bath slippers to yogurt cups and found that a third of them contained chemicals that induced the growth of fat cells in the lab.

“The most important finding, I think, is that everyday plastic products contain chemicals that can disrupt our metabolism in a process we call adipogenesis,” study co-author and Norwegian University of Science and Technology (NTNU) associate professor Martin Wagner told EcoWatch. “And we know that adipogenesis is like the first step towards developing obesity or becoming overweight later.”

The researchers used mass spectrometry to identify the chemicals in 34 common plastic items, including food packaging like yogurt cups and plastic bottles as well as household items like kitchen sponges or placemats. The goal, Wagner said, was to cover the major types of plastic polymers.

They found a total of 55,300 distinct chemical features, but were only able to identify 629 of them. Among them were 11 previously-known metabolism disrupting chemicals (MDCs). However, the scientists then tested whether or not exposure to the plastics would encourage precursor cells to transform into fat cells. Some of the plastics that encouraged fat-cell growth did have one of the 11 known MDCs in their chemical makeup, but others did not.

“It’s very likely that it is not the usual suspects, such as Bisphenol A, causing these metabolic disturbances,” first-study author Johannes Völker of NTNU’s Department of Biology said in a press release emailed to EcoWatch. “This means that plastic chemicals other than the ones we already know could be contributing to overweight and obesity.”

Causes of a Pandemic

The study adds to a growing body of research that suggests the obesity pandemic isn’t just a question of poor diets and sedentary lifestyles. Almost three times more people are obese today than they were in 1975, and this is a major public health concern. Obesity contributes to many of the most common causes of death including cancer and heart disease and can increase the risk of contracting infections including COVID-19.

At first, health experts thought that obesity was caused by a mix of genetics and lifestyle factors, but this doesn’t explain all the data. For example, a 2016 study found that the body mass index (BMI) for 36,377 U.S. adults between 1988 and 2006 rose by as much as 2.3kg/m(2) even when caloric intake and physical activity stayed constant. This led to the conclusion that there must be another factor promoting weight gain. But what? One potential culprit was chemicals that mess with the endocrine system, which controls appetite, metabolism and weight.

Plastics aren’t the only potential source of exposure to these chemicals. Pesticides are another. For example, a 2021 study found that chlorpyrifos can slow the calorie-burning efforts of brown fat in mice. However, plastics are an increasingly ubiquitous part of our daily lives. The obesogen hypothesis indicates that obesity, like many public health and environmental problems, will not be solved by appeals to personal responsibility alone.

“It puts the responsibility, in our case, I think, really on the plastic producers, because they should make sure that their products that they’re selling us are safe,” Wagner told EcoWatch.

But what is the chance that the chemicals contained in the 34 plastic products are actually ending up in people’s bodies? There are several ways that this could happen, Wagner said. Chemicals can leach from plastic food containers, especially when heated. Children might chew on toys or items like plastic sponges. It’s also possible that the chemicals could migrate through the skin when you wear plastic gloves or slippers. Finally, we might breathe them in; phthalates have been found in household dust. While more research would be needed to test whether the chemical mixtures discovered in the study would encourage obesity in animals, there is evidence from both animal and epidemiological studies that BPA at least is strongly associated with obesity.

In the meantime, what can consumers do to make sure the plastic products in their lives aren’t working against their diets or gym memberships? Wagner said that PVC and polyurethane products “really stood out” when it came to MDC content. PVC is often found in flooring and also placemats, while polyurethane is a foam used for insulation but also other squishy materials like sponges.

These two polymers can therefore be avoided, or at least kept out of the mouths of babes. But for the other polymers like polystyrene and polyethylene, which are often used in food containers, the results were more ambiguous. One polystyrene sample had very active MDCs, while the others did not. This can make things more difficult for conscientious shoppers.

“If you buy [a] yogurt cup from polystyrene, you don’t know which one contains the toxicity,” Wagner said.

However, it also provides an opportunity for plastics manufacturers.

Wagner’s team hopes to next work on identifying which of the unknown chemicals they discovered are truly active MDCs. This will help regulators and manufacturers to know what to look out for. But Wagner also thought that plastic makers should work on designing products that have simpler chemical recipes. This will be especially important if we succeed in switching to a circular economy, because more chemicals usually have to be added to a plastic when it is recycled and reused.

“How can we design a yogurt cup that only contains ten chemicals that we can analyze and assess and make sure that they are safe?” Wagner challenged.