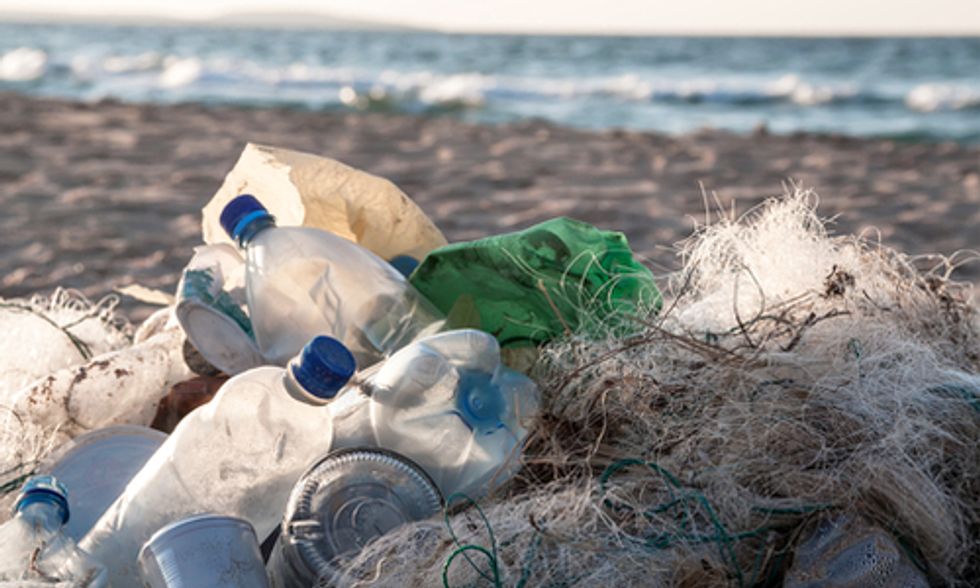 Concern is growing over the threat that widespread plastic waste poses to marine life, with conservative estimates of the overall financial damage of plastics to marine ecosystems standing at $13 billion USD each year, according to two reports released on the opening day of the first UN Environment Assembly.

The report notes that marine pollution is the largest secondary cost, and that the figure of $13 billion USD is likely a significant underestimate.
Photo courtesy of Shutterstock

The eleventh edition of the UN Environment Programme (UNEP) Year Book looks at ten issues flagged as emerging by previous reports over the past decade, including plastic waste in the ocean. The UNEP Year Book 2014 gives an update on each issue and provides options for action. Other areas covered include the environmental impacts of excess nitrogen and marine aquaculture, air pollution's deadly toll and the potential of citizen science.

Valuing Plastic, a UNEP-supported report produced by the Plastic Disclosure Project (PDP) and Trucost, makes the business case for managing and disclosing plastic use in the consumer goods industry. It finds that the overall natural capital cost of plastic use in the consumer goods sector each year is $75 billion USD—financial impacts resulting from issues such as pollution of the marine environment or air pollution caused by incinerating plastic.

The report says that more than 30 percent of the natural capital costs of plastic are due to greenhouse gas emissions from raw material extraction and processing. However, it notes that marine pollution is the largest downstream cost, and that the figure of $13 billion USD is likely a significant underestimate.

"Plastics have come to play a crucial role in modern life, but the environmental impacts of the way we use them cannot be ignored," said Achim Steiner, UN under-secretary-general and UNEP executive director. "These reports show that reducing, recycling and redesigning products that use plastics can bring multiple green economy benefits—from reducing economic damage to marine ecosystems and the tourism and fisheries industries, vital for many developing countries, to bringing savings and opportunities for innovation to companies while reducing reputational risks."

"Our economies are still largely fossil-fuel based, with the environmental, economic and health costs hidden," Steiner added. "For example, in the polar regions, scientists have recently found tiny pieces of plastic trapped in sea ice. Transported by ocean currents across great distances, these contaminated particles eventually become a source of chemicals in our food. The key course of action is to prevent plastic debris from entering the environment in the first place, which translates into a single powerful objective: reduce, reuse recycle."

A large and unquantifiable amount of plastic waste enters the ocean from littering, poorly managed landfills, tourist activities and fisheries. Some of this material sinks to the ocean floor, while some floats and can travel over great distances on ocean currents—polluting shorelines and accumulating in massive mid-ocean gyres.

There have been many reliable reports of environmental damage due to plastic waste: mortality or illness when ingested by sea creatures such as turtles, entanglement of animals such as dolphins and whales, and damage to critical habitats such as coral reefs. There are also concerns about chemical contamination, invasive species spread by plastic fragments and economic damage to the fishing and tourism industries in many countries—by, for example, fouling fishing equipment and polluting beaches.

Since 2011, when the UNEP Year Book process last looked at plastic waste in the ocean, concern has grown over microplastics (particles up to five mm in diameter, either manufactured or created when plastic breaks down). Their ingestion has been widely reported in marine organisms, including seabirds, fish, mussels, worms and zooplankton.

One emerging issue is the increasing use of microplastics directly in consumer products, such as microbeads in toothpaste, gels and facial cleansers, the Year Book says. These microplastics tend not to be filtered out during sewage treatment, but are released directly into rivers, lakes and the ocean.

Communities of microbes have been discovered thriving on microplastics at multiple locations in the North Atlantic. This "plastisphere" can facilitate the transport of harmful microbes, pathogens and algal species. Microplastics have also been identified as a threat to larger organisms, such as the endangered northern right whale, which is potentially exposed to ingestion through filter-feeding.

Production trends, use patterns and changing demographics are expected to cause increasing plastic use, and both reports call for companies, institutions and consumers to reduce their waste.

Valuing Plastic finds that consumer goods companies currently save $4 billion USD each year through good management of plastic, such as recycling, and that there is potential for greater savings. However, plastic use disclosure is poor: of 100 companies assessed, less than half reported any data relevant to plastic.

"The research unveils the need for companies to consider their plastic footprint, just as they do for carbon, water and forestry," said Andrew Russell, director of the PDP. "By measuring, managing and reporting plastic use and disposal through the PDP, companies can mitigate the risks, maximize the opportunities, and become more successful and sustainable."

Initiatives such as the PDP and the UNEP-led Global Partnership on Marine Litter have helped raise awareness of, and begun to address, the issue. However, much more needs to be done. Recommendations for further action from the reports include:

"Natural capital valuation has the power to help organizations understand their environmental impacts, including pollution of the ocean," said Richard Mattison, Trucost chief executive. "By putting a financial value on impacts such as plastic waste, companies can further integrate effective environmental management into mainstream businesses. By highlighting the savings from reuse and recycling, it builds a business case for proactive sustainability improvements."

"Ten years ago UNEP alerted the world to the development of dead zones in coastal waters resulting from excess nitrogen seeping into the water," said Steiner. "That was in the first edition of the Year Book series. In the intervening period many more emerging issues have been identified, with some rising to crisis level and others showing encouraging improvement."

"The 2014 Year Book shows how scientific endeavours and policy actions have led to innovative solutions and vital advancements," he added. "It reconfirms the critical role that the environment plays in maintaining and improving the health of people and ecosystems; from well-managed soils and nutrients that underpin food production to the critical role of biodiversity in protecting human health against the spread of infectious diseases. Clean air in our cities prevents the premature death and illness of millions and can save society trillions of dollars."

The UNEP Year Book 2014 lays out the state of play in critical areas, including:

First looked at in 2003 by the Year Book team, nitrogen continues to be used inefficiently as a plant nutrient in many of the world's agricultural systems. The amount of usable nitrogen produced by humans is now about 190 million tonnes per year, greater than the 112 million tonnes created through natural processes.

As nitrogen moves through the environment, the same nitrogen atom can contribute to multiple negative effects in the air, on land, in freshwater and marine systems, and on human health. This sequence continues over a long period and is referred to as the "nitrogen cascade".

Excess nitrogen in the environment contributes to many problems, including:

Better management practices are essential for improving nitrogen use efficiency, the Year Book finds. This is the most cost-effective option for reducing nitrogen losses to the environment from agricultural sources.

According to the recent UNEP-commissioned report, Our Nutrient World, a 20 percent improvement in global nutrient use efficiency by 2020 would reduce annual use of nitrogen by an estimated 20 million tons. This could produce savings of between $50-$400 billion USD per year in terms of improvements in human health, climate and biodiversity.

Aquaculture production has increased since the 1950s from 650 thousand tons to almost 67 million tons, and today provides half of all fish for human consumption. Marine aquaculture production by volume grew by 35 percent during the last decade, while production in fresh and brackish water grew by 70 and 83 percent, respectively.

While progress has been made towards making marine aquaculture more sustainable, environmental concerns remain. Fish farms can release nutrients, undigested feed and veterinary drugs to the environment. They can also increase risks of diseases and parasites and of harmful algal blooms. In some countries, certain forms of shrimp farming have destroyed large areas of coastal habitats, such as mangrove forests.

Healthy marine ecosystems are fundamental to reaching development goals, with respect to securing food and providing jobs. Marine aquaculture's impacts and predicted growth call for strengthened efforts towards environmentally sound development of the sector to avoid the loss of important ecosystem services.

Technical innovations, the experience and growing skills of aquaculture producers, and improved knowledge of environmental impacts and operational and governance opportunities provide hope for a sustainable marine aquaculture sector supporting a growing world population with food and livelihoods.

The World Health Organization (WHO) estimates that in 2012, air pollution led to around 7 million premature deaths (one out of eight total global deaths), more than double previous estimates. It is the leading cause of environmentally related deaths.

Air quality is deteriorating in most cities where there are sufficient data to make comparisons with previous years. The WHO guideline for average annual fine particulate matter is 25 microgrammes per cubic metre. Cities in low- and middle-income countries far exceed this level. For example, in Kathmandu, Nepal, particulate matter (PM2.5) levels of more than 500 micrograms per cubic meter have been measured.

The cost of air pollution to the world's most advanced economies, plus India and China, is estimated at $3.5 trillion USD per year in lives lost and ill health. In Organisation for Economic Co-operation and Development countries, the monetary impact of death and illness due to outdoor air pollution is estimated to have been $1.7 trillion USD in 2010. Research suggests that motorized on-road transport accounts for about 50 percent of that amount.

In light of the high costs related to the health and environmental effects of air pollution, all countries should invest in clean air policies, the report says.

Citizen science, research conducted in whole or part by the public, can go beyond simple data collection to help shape fundamental questions about our world and provide intriguing answers, the report finds. It has grown in the past decade, due in part to the Internet, social media and other technologies. Opportunities to volunteer to take part in scientific research have exploded, from analyzing cancer data to theoretical physics.