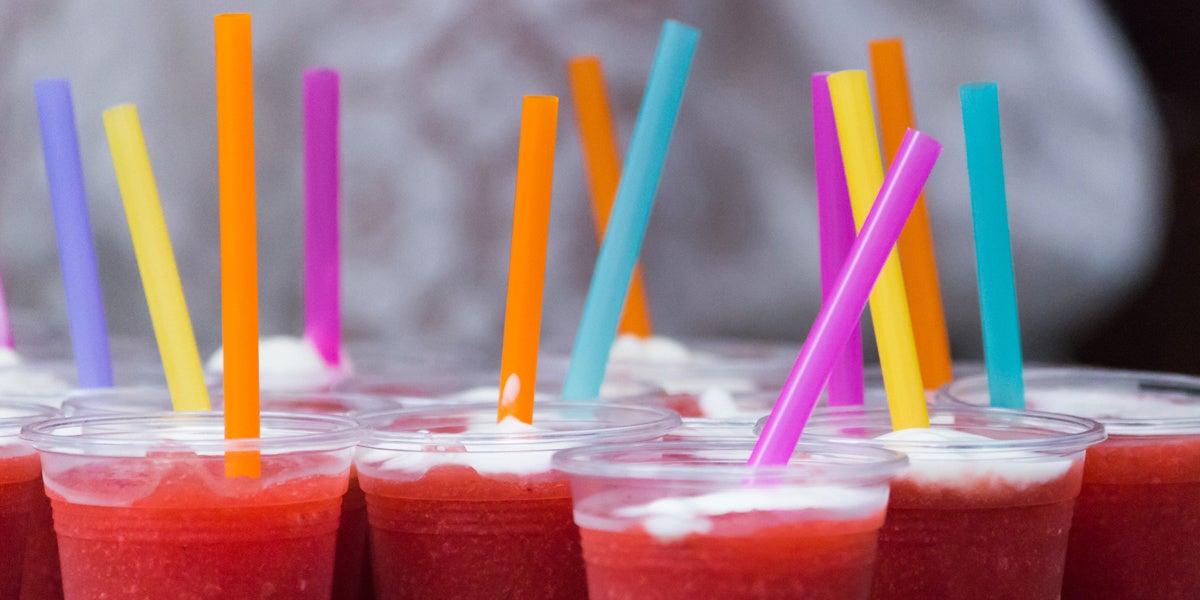 The movement to ban plastic straws has gained major momentum this month, with Seattle’s ban going into effect July 1 and companies like Starbucks, Hyatt and American Airlines all agreeing to phase the sucking devices out as well.

But the anti-straw push has had unintended consequences for people with disabilities, many of whom need the flexibility and heat-resistance of plastic straws to be able to dine out.

“Many people with physical disabilities such as cerebral palsy and multiple sclerosis require the use of plastic straws in order to hydrate,” Disability Rights Washington co-wrote in an open letter to the Seattle City Council about the ban. “Other types of straws simply do not offer the combination of strength, flexibility, and safety that plastic straws do.”

A graphic has started circulating on Twitter showing exactly why other alternatives like paper (it dissolves) or metal (unsafe with hot liquids) won’t work as accessible replacements.

Hi, I guess it's now my full time job to post this infographic under every NPR plastic straws story until anyone learns that plastic straws are currently the safest option for people with disabilities. pic.twitter.com/S9JRxxlNfh

For many people with disabilities, who make up one in five Americans, the ban on straws is yet another example of how their needs are overlooked by the able-bodied.

“Our voices are so often left out of the conversation, and our needs so rarely considered, because disabled people are not seen as fully equal members of society,” Karin Hitselberger wrote in an a piece about the straw bans for The Washington Post.

But for the able-bodied, their medical usefulness has been forgotten and they have become a symbol of plastic waste.

David M. Perry speculated in Pacific Standard the current push against straws might have come from a 2015 video of a sea turtle with a plastic straw stuck up its nose, which helped straws become a stand-in for larger concerns about plastics polluting the world’s oceans.

But one gruesome video doesn’t make straws a numerically significant as a threat to marine life compared to plastic bags or fishing gear, Perry wrote. The oft-cited figure that the U.S. throws away 500 million straws every day was actually estimated by a nine year old boy after calling three straw companies, Perry pointed out.

However, that doesn’t mean plastic straws are not part of the larger problem.

“Straws are maybe not the biggest source of either plastic pollution or disposable plastic we consume, but they’re in there,” senior resource specialist for the Natural Resources Defense Council Darby Hoover told NPR, adding that plastic in the oceans breaks down so much that it is hard to tell if a piece started out as a straw or a bottle.

Dune Ives of Lonely Whale, a Seattle non-profit that has partnered with both Alaska Airlines and Bacardi on anti-straw measures, said the plastic straw was chosen partly for psychological reasons, as a hook to convince people to take action and change their behavior.

“To us, it was the ‘gateway plastic’ to the larger, more serious plastic pollution conversation,” she wrote.

Disability advocates are sympathetic to the environmental motivations behind the straw bans, they just don’t want to be left out of the movement.

Hitselberger and Perry, whose son has Down syndrome and uses plastic straws, both recommend that businesses simply keep plastic straws behind the counter for anyone who asks.

“We don’t have to choose between making the world more sustainable or making it more accessible,” Hitselberger wrote.

Co-founder of Scottish disability rights organization One in Five Jamie Szymkowiak wrote a post for Greenpeace also calling on manufacturers to work on designing sustainable, non-plastic straws that would work for disabled customers.

“As we move to ridding our oceans, beaches and parks of unnecessary single-use plastics, disabled people shouldn’t be used as a scapegoat by large corporations, or governments, unwilling to push suppliers and manufacturers to produce a better solution. Instead, we must all work together to demand an environmentally friendly solution that meets all our needs, including those of disabled people,” Szymkowiak wrote.