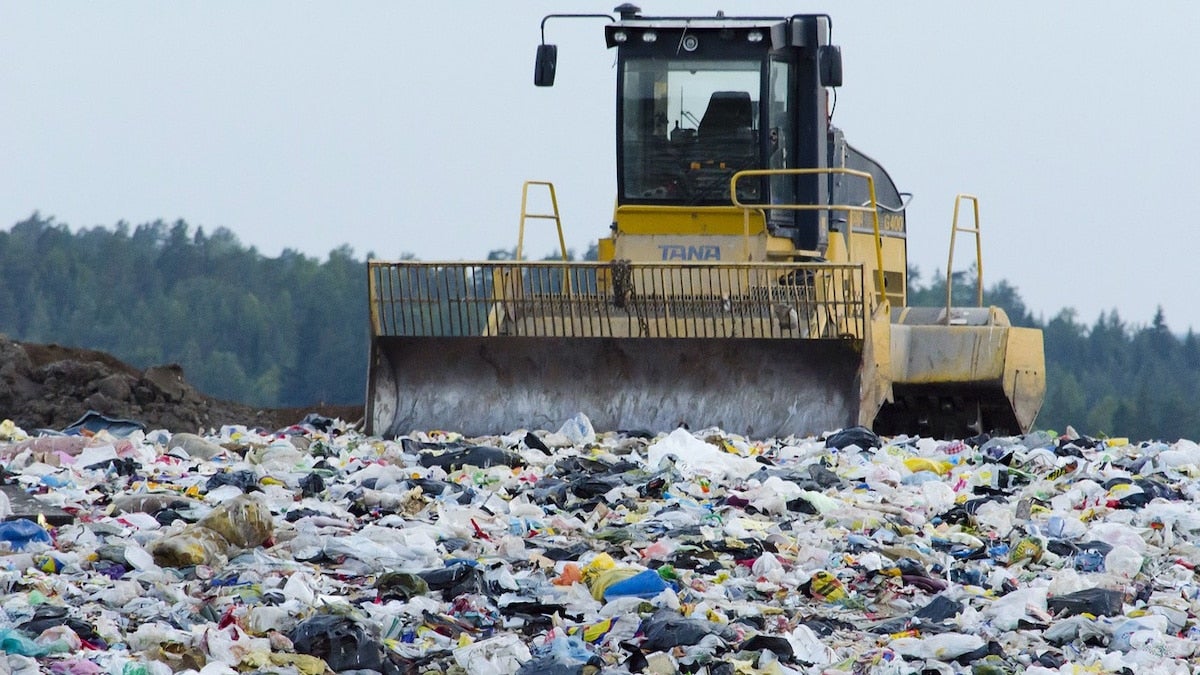 Plastic waste is bulldozed at a landfill. Needpix

“The bottle may look empty, yet it’s anything but trash,” claims a 1990 ad showing a plastic bottle bouncing out of a garbage truck, Houston Public Media reported. It’s full of potential.… We’ve pioneered the country’s largest, most comprehensive plastic recycling program to help plastic fill valuable uses and roles.”

While the ad and countless others like it extolling the value of recycling sound environmentalist in nature, they were paid for by the plastics industry and their lobbying and trade organizations, the news report added.

Americans believed these ads and have been recycling plastic for decades, trusting the discards would be kept out of burgeoning landfills and oceans and reborn as new goods. The reality, however, is that most plastic can’t and won’t be recycled, reported NPR. According to the EPA, in the last 40 years, less than 10% of plastic has been recycled.

Up until 2018, most recyclable plastic was shipped to China to deal with, reported Forbes. When the latter banned imports of 24 kinds of waste, including plastic from the U.S., more plastic ended up in U.S. landfills, the news report said. In 2017, 35,370 tons of plastic were produced and 26,820 tons of that was landfilled, the EPA estimated, reported Forbes.

A series of investigative reports done by NPR and the PBS series Frontline this year found that the oil and gas industries — the makers of plastic — knew all along that plastic recycling would never be realistically feasible on a large scale, yet they spent tens of millions of advertising dollars each year telling the public that plastic can and should be recycled.

Internal documents from the 1970s and former executives confirmed that the industry knew all along that recycling at a large scale would never be economically viable because the process costs more than making new plastic, NPR reported.

Larry Thomas, who led the industry’s lobbying group for more than a decade, broke his silence about what happened decades ago. The plastic industry never wanted recycling to work, because recycling was in direct competition with their business of selling as much oil as they possibly could, Houston Public Media reported.

“You know, they were not interested in putting any real money or effort into recycling because they wanted to sell virgin material,” Thomas told the news report.

Nevertheless, starting in the late 1980s, the industry misled consumers into believing that recycling could be a magic panacea. Spending million a year, big oil and plastic ran ads, installed collection centers and funded recycling projects and public regulation campaigns to convince the public that recycling works, NPR reported.

Most of these projects never came to fruition before funding was cut, or have long since ended, reported Houston Public Media.

The industry also lobbied 40 states to put recycling symbols with numbers on all plastic, even if they weren’t recyclable, to bolster the public image that plastic can be a renewable resource, the news report found.

“It’s pure manipulation of the consumer,” Coy Smith, a frustrated recycler out of San Diego, told Houston Public Media. He witnessed firsthand how the symbols caused consumers to think any plastic with the symbol was recyclable.

Again, lobbying groups and the plastics industry knew all this. A 1993 industry report said that the codes created “unrealistic expectations” about how much plastic can actually be recycled and were being misused by companies as a “green marketing tool,” Houston Public Media reported.

When plastic bans started to pop up in the ’80s and ’90s, the industry similarly promoted recycling as an alternative to the bans, NPR reported. The industry again decided to “advertise [its] way out” of cultural and policy shifts that could potentially lead to falling sales of new plastic, NPR reported.

“The feeling was the plastics industry was under fire, we got to do what it takes to take the heat off, because we want to continue to make plastic products,” Thomas told NPR. “If the public thinks the recycling is working, then they’re not going to be as concerned about the environment.”

The strategy worked, and the companies promoted recycling while selling billions of dollars worth of new plastic. Meanwhile, old plastic continued to get trashed.

In response to the investigation, industry representative Steve Russell said the industry has never intentionally misled the public about recycling and is committed to ensuring all plastic is recycled, Forbes reported. Still, according to the news report, the oil industry makes 0 billion a year producing plastic and is discussing how to increase investment in plastic production given that demand for oil for cars is down.

As the truth about recycling comes out, states and environmentalists struggle to see if the broken system can be fixed at all. While they do that, plastic production is predicted to triple by 2050, NPR reported, and, “once again, the industry is spending money on ads and public relations to promote plastics and recycling.”