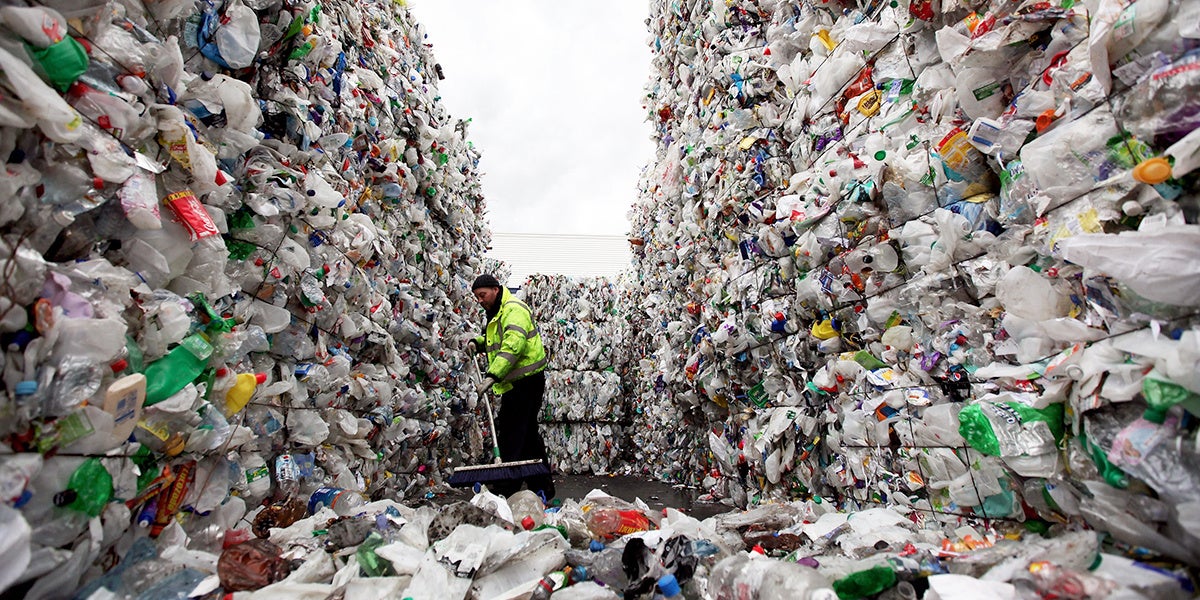 Soft drinks executives told government officials most shoppers don’t care much about the environmental impact of the plastic drinks bottles they buy, according to documents seen by Unearthed.

Coca-Cola, Lucozade Ribena, Danone and Nestle were among those invited to a soft drinks roundtable to discuss the problem of plastic bottle waste and recycling at Defra’s headquarters in October.

They told officials: “The environmental impact of packaging was low on consumers’ priorities when buying a soft drink,” according to a note of the meeting obtained by Unearthed using Freedom of Information rules.

Plastic pollution, particularly single-use packaging such as drinks bottles, has come under increasing scrutiny in the past year after global concern at the amount of plastic entering the oceans: An estimated 15 million plastic drinks bottles are thrown away rather than recycled every day in the UK.

The screening of Blue Planet 2 this autumn, which included footage of turtles trapped in plastic debris and albatrosses feeding their young on plastics, has only increased the public concern around the issue.

This week environment secretary Michael Gove told reporters he had been inspired by Blue Planet 2 to tackle the issue and wanted to boost recycling rates, cut the amount of plastic in circulation and to make recycling easier by reducing the number of different types of plastic in common use.

Drinks company executives at the October roundtable meeting told officials, including waste minister Therese Coffey, that “environmentally-aware consumers like the idea of less plastic” but others “associate softer bottles with inferior quality.”

They added that it “may be easier to address littering than attempt to educate consumers on materials.”

The meeting was held under Chatham House rules, where no information is shared on who said what.

Consumers tend to say they do care about the environmental footprint of drinks packaging. In September, a YouGov survey for recycling company Veolia found that half of consumers (51 percent) would choose a new drink in a recyclable container over a familiar one in a non-recyclable container.

In 2015, 71 percent of respondents to a YouGov survey said they would back a small increase in the price of a plastic milk bottle if this ensured it was partly made of recycled plastics and would be recycled after use.

Gove is currently considering whether to introduce a deposit return scheme (DRS), in which consumers are charged a small amount for the container their drink comes in, which is refunded when they return the bottle or can. In February Coca-Cola announced it now supports a DRS, after Unearthed revealed it had previously lobbied the Scottish government against it.

At the October meeting, some of the drinks companies said introducing the new system alongside existing curb side collections could be “confusing for consumers,” who the companies suggested were “more interested in getting rid of the rubbish (convenience)” than in any financial reward.

Nearly three-quarters of those polled by YouGov in August on behalf of the Marine Conservation Society said they would support a deposit return scheme.

The Marine Conservation Society’s head of pollution, Dr. Laura Foster, said: “Responsible consumers, manufacturers and retailers are increasingly becoming aware that they don’t want to see their products harming the environment … Incentivising returning of beverage containers through DRS has been shown to be highly effective, with return rates of over 95% in countries where it has been introduced.”

A spokeswoman for Coca-Cola said the company supports DRS and has committed to double the amount of recycled plastic in its bottles to 50 percent by 2020. “We will source this material from a recycling plant in Lincolnshire and by doing so make a significant contribution to the circular economy in this country.”

She added: “No other soft drinks company is doing as much to make its packaging as sustainable as possible and you should ask other companies what their view on a DRS is, as their view may well differ to ours.”

Andrew Opie of the British Retail Consortium, which was present at the meeting, said: “We know how much consumers dislike litter and want to work with the government and others to reduce it.” But he said consumers prefer curb side collection, which is “already effective”.

Gavin Partington, director general at the British Soft Drinks Association, said: “As an industry, we are open to exploring whether a properly considered deposit return scheme could be a part of an overall solution and we are ready to work with government and others on this.”

A Nestle spokeswoman told Unearthed: “We agree in principle that a well-designed deposit return scheme (DRS), that is simple and easy to use, could be part of a holistic solution to achieving higher collection and recycling rates.”

The Scottish government plans to introduce the UK’s first DRS scheme. “This is clearly new territory for everyone and we will offer our full support in the development and piloting of this scheme,” the Nestle spokeswoman said.

A Danone spokeswoman said: “We don’t comment on the details of what was discussed in the meeting. However, we would like to say that Danone supports efficient solutions that lower societal costs and incentivize packaging producers to increase the recycling and reuse of their packaging.

“We are ready to engage with stakeholders at local and global level to design the system (or combination of systems) that makes the most sense. We believe that a DRS has its place within the portfolio of possible systems for a given country, region or city.”

Lucozade Ribena and Defra had not responded at the time of publication.