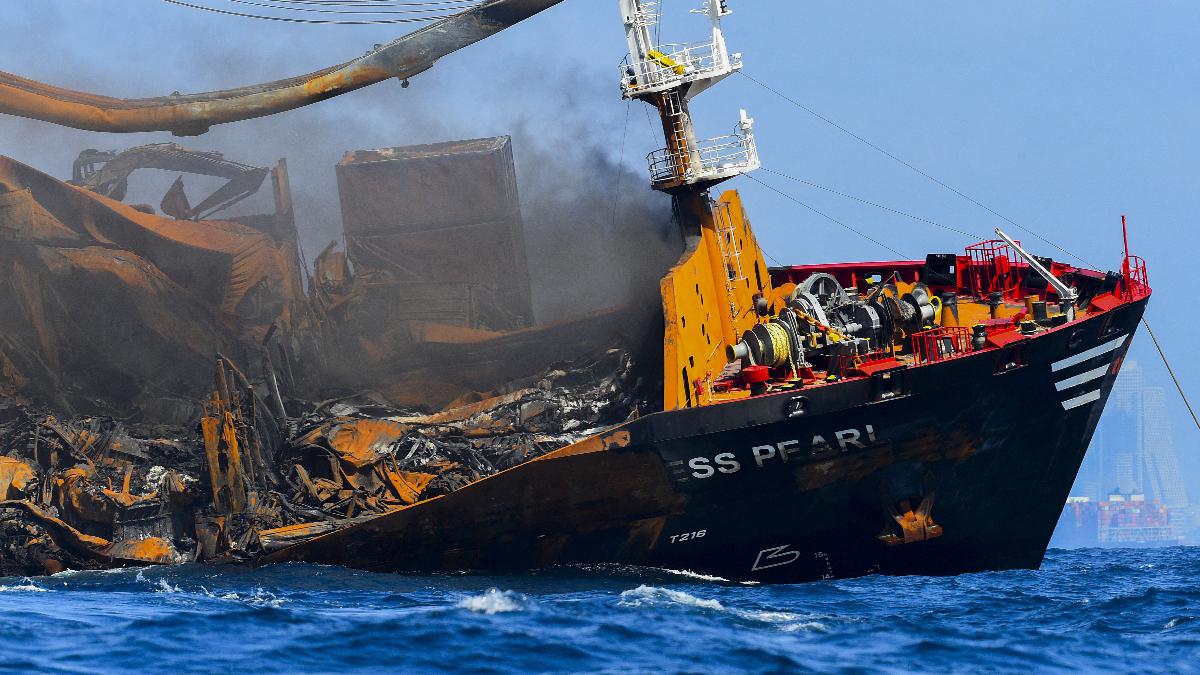 A chemical-laden ship sank off the coast of Sri Lanka Wednesday, after burning for nearly two weeks.

The accident has already led to one of the worst marine disasters in the country’s history, as tons of plastic pellets from the burning ship have already contaminated its fishing waters and washed up on its shores, Reuters reported.

Situation Update: Latest pictures of the "X-PRESS PEARL" vessel. Footage was captured by the SLAF Bell 212 a short while ago (02 June 2021).#MVXPressPearl pic.twitter.com/KsmlOtVfPn

The ship, a Singapore-registered container vessel named MV X-Press Pearl, caught fire May 20 after an explosion while it was anchored off of Sri Lanka’s western coast, according to Reuters. It was carrying 1,486 containers, including 25 metric tons (approximately 28 U.S. tons) of nitric acid and other chemicals. Some of these chemical-filled containers fell overboard in the fire. However, it is believed that most of the cargo was destroyed in the flames, according to AFP.

Up until now, the biggest devastation from the incident has been the plastic pellet pollution. The government moved Wednesday to suspend fishing along 50 miles of Sri Lanka’s coastline, grounding 5,600 boats, according to Reuters.

“I have never seen anything like this before,” Dinesh Wijayasinghe, a 47-year-old who works in a hotel in the coastal town of Negombo, told The New York Times. “When I first saw this, about three to four days ago, the beach was covered with these pellets. They looked like fish eyes.”

This pollution is devastating both for the region’s marine life and for the people who depend on it for their livelihoods. Microplastics and other charred remains from the ship have been found as far down as two feet deep in the sand, according to AFP. There are fears the pollution will harm mangroves and coral reefs and make it harder for fish to breed in shallow waters.

“No one is able to say how long we will have the adverse effects of this pollution,” 30-year-old fisherman Fisherman Lakshan Fernando told AFP. “It could take a few years or a few decades, but in the meantime what about our livelihoods?”

At the same time, the plastic pollution could have a lasting impact on human health.

“The pellets can soak and absorb the chemicals from the environment,” marine biologist Dr. Asha de Vos told The New York Times. “This is an issue because when we eat whole fish, we will also be eating these chemicals.”

#Debris and cargo that were on board the #Container Vessel #XPressPearl have been spotted along the beach in the “Kapungoda ,Seththapaduwa” area in #Negambo by local #fishermen. A cargo container has also been spotted at around 4am in the same area. The fire continues. pic.twitter.com/IQlzrC9acq

The ship began to sink on Wednesday, according to Reuters. A salvage crew tried to drag the ship into deeper waters, but the attempt was ultimately unsuccessful.

There are now concerns an oil spill could make the environmental disaster even worse, CNN reported. The vessel has 350 metric tons (approximately 386 U.S. tons) of oil in its tank. This could reach a 30-kilometer (approximately 19 mile) stretch of coastline, including pristine beaches.

Fisheries Minister Kanchana Wijesekera tweeted that there was a plan in place to deal with any potential oil spill.

“Booms and skimmers will be used around the vessel and strategic locations, spray to be used to disperse Oil Slick,” he said.

MEPA has formulated a strategic plan in case there is an #OilSpill from the #XPressPearl. Booms and skimmers will be used around the vessel and strategic locations, spray to be used to disperse Oil Slick. There are also contingency plans for full beach cleanups.
The full plan ?? pic.twitter.com/ngL0gfGBAG