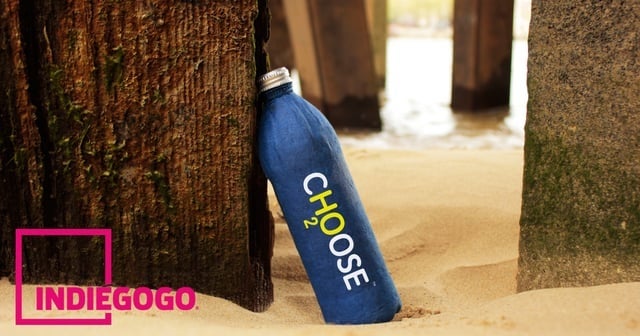 As the UK government and businesses step up their war on single-use plastics, a British inventor has developed a way for UK consumers to hydrate on the go while still joining the fight.

James Longcroft launched an Indiegogo campaign Monday to crowdfund production of his Choose Water bottle, which is plastic-free and decomposes within three weeks in landfills or water, Business Insider UK reported Wednesday.

“I want to provide an alternative to plastic. Even if our bottle is only half a percent of all the bottles used, that is still millions of bottles,” Longcroft told the Evening Standard Tuesday.

According to Business Insider, the outside of the bottle is made from recycled paper donated by businesses. The paper is vacuum-formed into a 3D casing that is coated on the inside with Longcroft’s specially-developed, environmentally-friendly lining, the campaign page explained.

According to the campaign website, the lining actually contains beneficial components that reduce acidity in soil and provide nutrients to river and ocean ecosystems. Choose Water told Business Insider in a statement that the compounds were safe for marine life to eat.

“I have driven my fiancée mad trying to get the formula right. It was just a case of experimenting. We are really excited to get our bottles into people’s hands as soon as possible,” Longcroft told the Evening Standard.

The bottle’s lid is also made from steel that can rust and decompose within a year.

Longcroft, who is still waiting on patents for the bottle’s lining, explained he needed to crowdfund to scale up the bottle’s production.

‘We need new machinery, tooling and distribution networks so we can complete (sic) with the plastic big-guns, and get our bottles onto shelves as soon as possible,” the campaign reads.

In addition to saving ocean life, the Choose Water bottles will also help provide clean drinking water to communities in Africa. 100 percent of profits from bottle sales will go to Water for Africa.

Providing clean water was what initially got Longcroft into the bottled water business. He set up Choose Water as a social enterprise and decided to partner with Water for Africa.

But after being contracted to sell water bottles at a food festival in August 2017, Longcroft grew aware of the plastic pollution problem and vowed to go plastic-free. Choose Water stopped selling plastic bottles at the end of summer 2017 and spent a year developing and perfecting a plastic-free option.