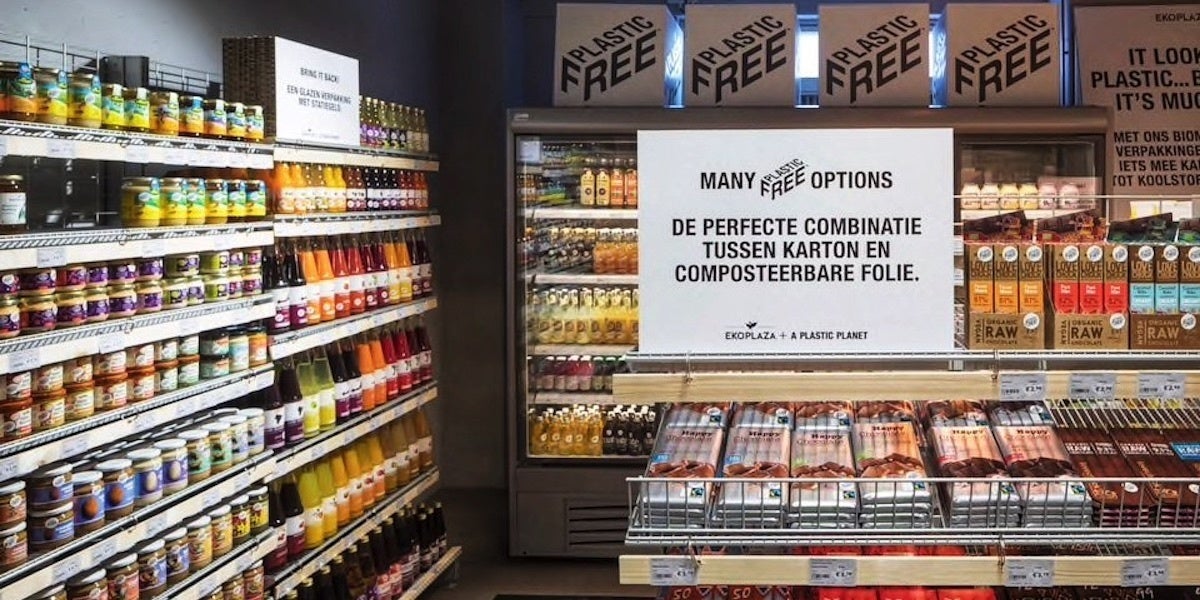 Shoppers at the Jan Pieter Heijestraat
branch of Dutch supermarket chain Ekoplaza will have roughly 700 plastic-free products to choose from, including meat, rice, sauces, dairy, chocolate, cereals, yogurt, snacks, fresh fruit and vegetables. Instead of plastic, items are packed in compostable materials or glass, metal and cardboard.

“Plastic-free aisles are an important stepping stone to a brighter future for food and drink,” Ekoplaza chief executive, Erik Does, said in a statement. “We know that our customers are sick to death of products laden in layer after layer of thick plastic packaging.”

Ekoplaza, which has 74 stores across the Netherlands, plans to roll out similar aisles across all branches by the end of the year. A second store is expected to be in The Hague by June.

Sian Sutherland, co-founder of
A Plastic Planet, the environmental organization behind the initiative, hopes other food retailers will follow.

“There is absolutely no logic in wrapping something as fleeting as food in something as indestructible as plastic,” she said in a statement. “Europe’s biggest supermarkets must follow Ekoplaza’s lead and introduce a plastic-free aisle at the earliest opportunity to help turn off the plastic tap.”

Humanity’s enormous plastic footprint can be found on
all corners of the planet, the
deepest parts of our oceans and in the stomachs and cavities of seabirds, turtles and even tiny plankton.

A recent
study published in the journal Science Advances found that more than 8.3 billion tonnes (or 9.1 tons) of plastic has been generated, distributed and discarded since the 1950s. Of that total, 6.3 billion tonnes can be classified as waste but only 9 percent of that total is recycled and 12 percent gets incinerated. The rest, about 79 percent of plastic trash, simply accumulates in landfills or pollutes the natural environment.

“Most plastics don’t biodegrade in any meaningful sense, so the plastic waste humans have generated could be with us for hundreds or even thousands of years,” study co-author Jenna Jambeck, an associate professor of engineering at the University of Georgia,
said. “Our estimates underscore the need to think critically about the materials we use and our waste management practices.”

“We cannot continue with business as usual unless we want a planet that is literally covered in plastic,” added lead author Roland Geyer, a UC Santa Barbara industrial ecologist.

Thankfully, a growing number of
retailers and governments are taking action to curb plastic pollution. Earlier this month, Taiwan’s Environmental Protection Agency proposed an ambitious 12-year timeline to eliminate four types of single-use plastics—takeaway beverage cups, drinking straws, shopping bags and disposable tableware—by 2030. Chile prohibits the sale of single-use plastic bags in 102 coastal villages and towns. Kenya introduced a serious law that slaps a fine or even a jail sentence on anyone who manufactures, sells or even carries a plastic bag. Scotland has also announced plans to ban the manufacture and sale of plastic-stemmed cotton buds as well as plastic straws.