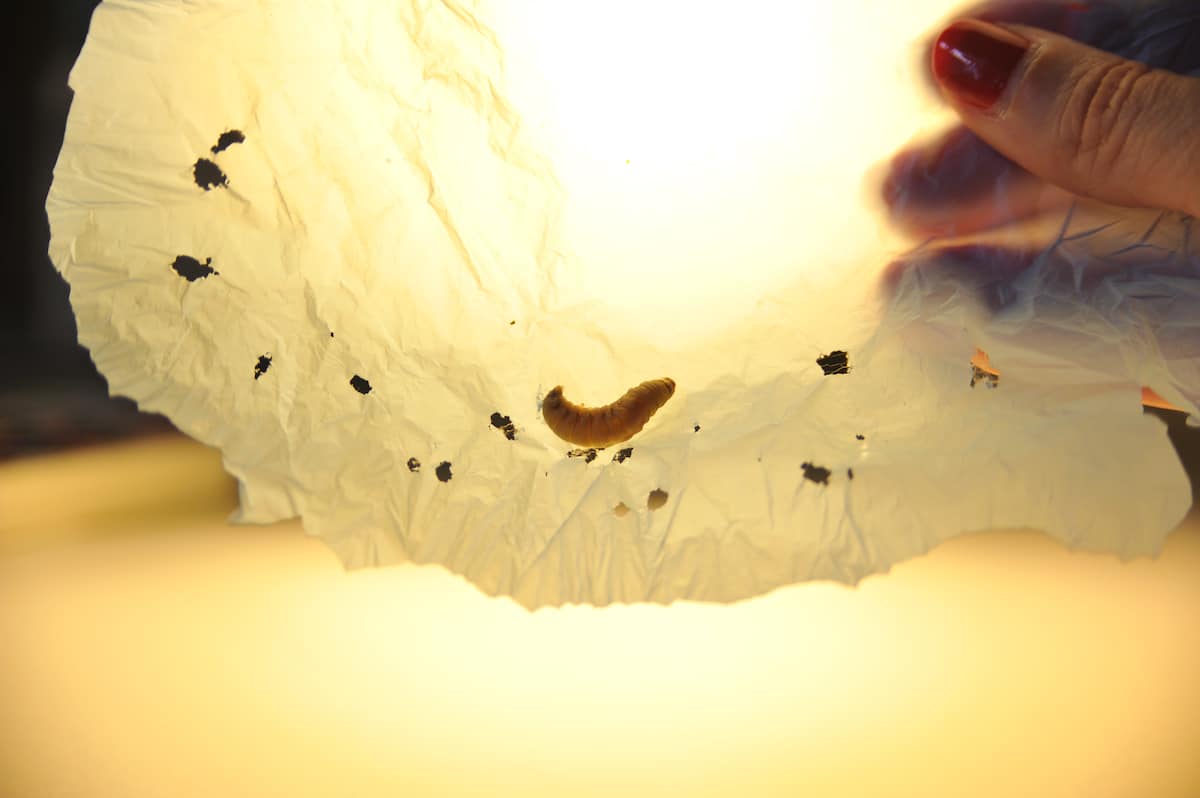 What began as an infestation could be a surprising nature-based solution to the plastic pollution crisis.

In 2017, scientist and amateur beekeeper Federica Bertocchini found some unwanted intruders in one of her hives, wax-moth larvae that feed on beeswax. She took the worms out of her hive and placed them in a plastic bag. However, it turned out that the polyethylene (PE) prison would not hold them.

“I went back to the room where I had left the worms and I found that they were everywhere,” she told The Guardian at the time. “The bag was full of holes.”

After conducting further experiments, Bertocchini and her research team concluded that wax worms (Galleria mellonella) could both digest and biodegrade plastic, causing visible damage to a PE-plastic bag in just 40 minutes. They published their findings in Current Biology. However, Bertocchini wanted to know what else the worms could do.

Now, in new research published in Nature Communications Tuesday, the team from Madrid’s Margarita Salas Center for Biological Studies (CIB) isolated two enzymes in the wax worms’ saliva that could degrade PE within a couple of hours at room temperature.

“To the best of our knowledge, these enzymes are the first animal enzymes with this capability, opening the way to potential solutions for plastic waste management through bio-recycling/up-cycling,” the study authors wrote.

PE is a major contributor to the problem of plastic pollution, making up 30 percent of all plastic production. It is often used to make plastic bags, which are the fourth most common plastic item found in the ocean. In addition to being widely used, PE is one of the plastics that is the most difficult to break down. Currently, it is only recycled mechanically, and the process usually results in lower-quality polymers. Further, there are serious questions about the effectiveness of recycling plastic in general, and U.S. recycling rates for the material have dropped to between five and six percent. Yet the substance continues to be produced, used and discarded, showing up everywhere from the ocean floor to Mount Everest. If current trends continue, there will be more plastic in the ocean than fish by 2050.

The enzymes found in the worms’ saliva can help with the first, most difficult part of breaking PE down, Bertocchini explained in a CIB press release.

“For plastic to degrade, oxygen must penetrate the polymer (the plastic molecule). This is the first step in oxidation, which is usually a result of exposure to sunlight or high temperatures, and represents a bottleneck that slows down the degradation of plastics like polyethylene, one of the most resistant polymers,” she said. “That is why, under normal environmental conditions, plastic takes months or even years to degrade.”

Yet the enzymes can first oxidize and then degrade the PE polymers within hours. There is still more work to be done before these enzymes are deployed at scale, however.

“We need to do a lot of research and think about how to develop this new strategy to deal with plastic waste,” study co-author Dr. Clemente Arias, also of CIB, told The Guardian.

Nevertheless, the team was excited about the possibilities.

“We can imagine a scenario where these enzymes are used in an aqueous solution, and liters of this solution is poured over piles of collected plastic in a waste management facility,” Bertocchini told AFP, adding “We can also imagine small amounts that can reach more remote locations, like villages or small islands, where waste facilities are not available.”

Dreaming of Beachfront Real Estate? Much of Florida’s Coast Is at Risk of Storm Erosion
By Zhong-Ren Peng
By The Conversation
Arctic Carbon Transportation Route Discovered by Scientists
In the Arctic, a previously unknown carbon transportation route has
By Cristen Hemingway Jaynes
Why Fixing Methane Leaks From the Oil and Gas Industry Can Be a Climate Game Changer That Pays for Itself
By Jim Krane
By The Conversation