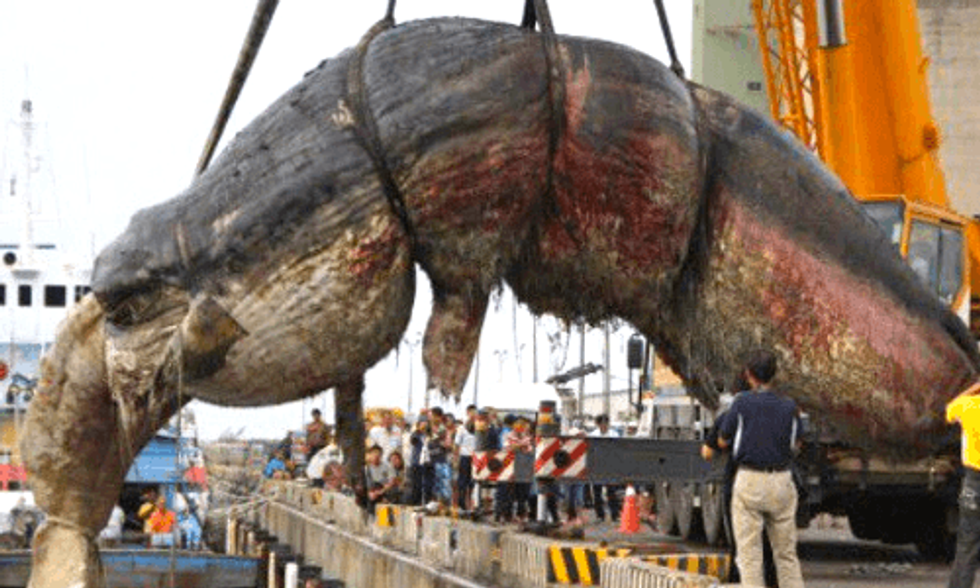 According to the Association Foreign Press (AFP) news agency, the 15-meter (49-foot) whale was first found stranded near the town of Tongshi on Oct. 15.

Coastguards and scientists returned it to the sea, but three days later, the same whale was found dead around 20 kilometers (12 miles) away.

After conducting an autopsy of the whale, local marine biologists reported that there was enough plastic bags and fishing nets found in its stomach to fill an excavator bucket.

Professor Wang Chien-ping, head of the whale research center at National Cheng-Kung University, told the AFP that while the whale might have died from many causes, such as heart or lung disease or infections, trash was also a culprit.

"The large amount of man-made garbage in the stomach could reduce its appetite and cause malnutrition," he said. "It was likely a critical cause of death."

About 80 percent of the sperm whale's diet is giant squid, so this whale might have mistaken plastic bags for food.

He Chih-ying, spokeswoman for The Society of Wilderness conservation group, spoke about how ocean trash is a major plague to marine life.

"We frequently heard of marine animals killed after swallowing lots of garbage, but this one was the biggest in size for many years," she told the AFP.

The harmful effects of marine pollution have been choking the entire marine food chain, from plankton to much larger creatures.

In August, a group of fishermen in Middle Harbour, Sydney, came across an endangered Southern right whale struggling with a plastic bag and fishing line caught in its mouth. Luckily, the men were able to remove the debris.

Marine biologist Tegan A. L. Mortimer told EcoWatch that incident is a reminder that these creatures live in our backyards and are impacted by human activities.

“Globally, the leading threats to whales, dolphins and porpoises are entanglement in fishing gear and strikes from vessels,” she said. “The impacts of plastic pollution on these animals isn’t well understood but we do know, from examples like this, that these animals are interacting with our plastic trash. Plastic in the ocean is something that everyone can have a positive impact on.”