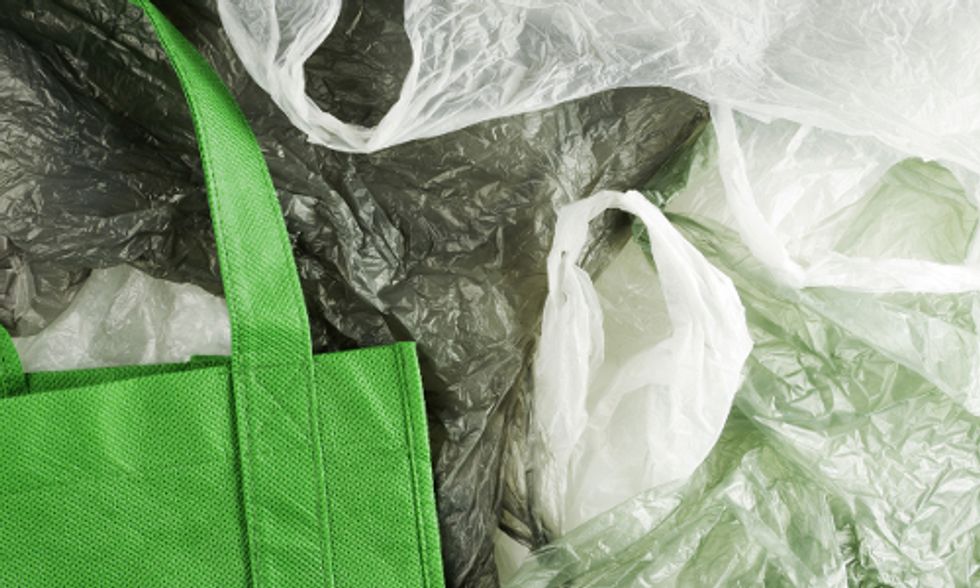 California's statewide ban on single-use plastic bags will be delayed if bag manufacturers succeed in getting a repeal initiative onto the November 2016 ballot.
Photo credit: Shutterstock

“This bill is a step in the right direction—it reduces the torrent of plastic polluting our beaches, parks and even the vast ocean itself,” said Brown in September. “We’re the first to ban these bags, and we won’t be the last.”

But the bag manufacturers are fighting to dial that number back to zero. Despite strong public support for the ban—more than 125 California cities and counties had already enacted their own bag bans prior the statewide legislation—bag manufacturers are working hard to overturn it. Their trade organization, the American Progressive Bag Alliance, has spent $3 million to collect signatures to place a repeal of the bill on the November 2016 ballot, saying that claims that the bags contribute to litter and pollution are overblown.

"You just take it back to the grocery store and stuff it into a container and it gets recycled," Jon Barrier, a spokesman for the bag trade group told Reuters.

Californians Against Waste, the group that pushed for the ban, says they're ready to defeat the initiative and pointed to polling that shows 60 percent of Californians support keeping the ban in place.

“After spending more than $3.1 million, 98 percent of which was raised from out of state, it is clear that the plastic bag industry is more interested in their own profits than reducing an unnecessary source of pollution and waste that threaten California’s wildlife and pollutes our ocean, coast and our communities," said Californians Against Waste executive director Mark Murray. "Californians overwhelmingly support the law, and the $30 million to $50 million it will cost the plastics industry to launch a full-fledged campaign in 2016 if the measure qualifies will be proven to be an act of political malpractice, particularly since nearly half the state will no longer have plastic bags by election day."

"Virtually all of the plastic bags sold in California are produced by just three out-of-state corporations," he said, adding, “This is not the first time that out-of-state polluters have attempted to repeal a California environmental law. In 2010, out-of-state oil companies, along with the Koch Brothers, spent more millions on Proposition 23, an initiative that would have suspended AB 32, California’s Global Warming Solutions Act. Voters soundly rejected that effort by polluters, and we are confident that, given the opportunity, voters will reject a repeal of the plastic bag ban.”

The bag manufacturers group has submitted 800,000 signatures; 505,000 are needed to place an initiative on the ballot. The secretary of state's office must now confirm that at least that number are valid before certifying the initiative. If it is certified, the ban would be delayed until after the election. In an odd twist of fate, the incoming secretary of state is Alex Padilla.