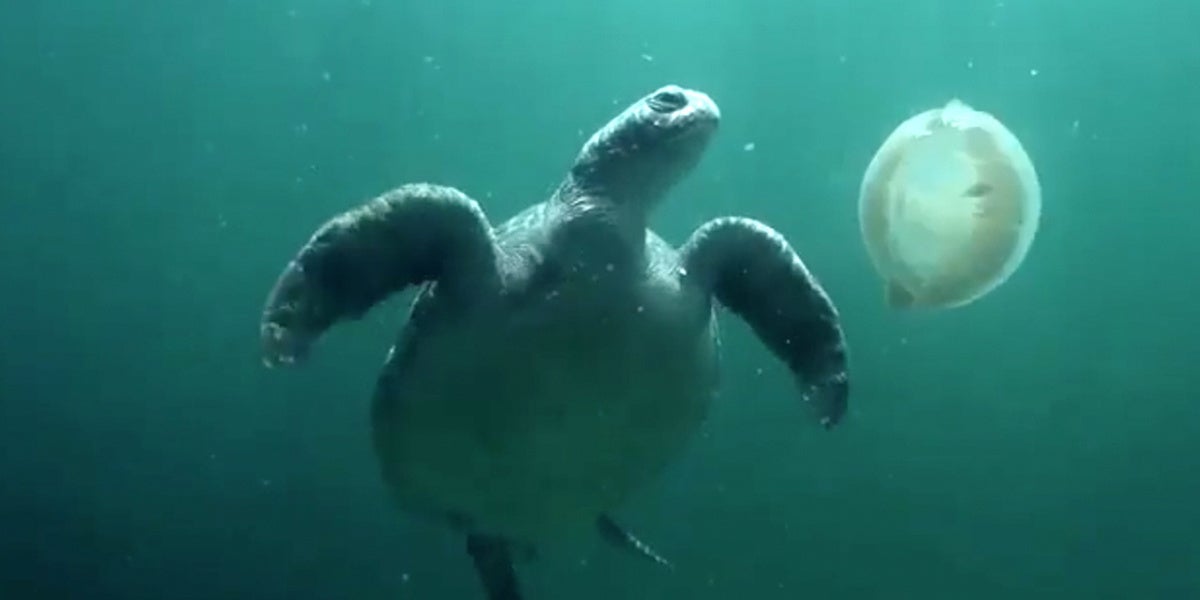 Plastic bag or jellyfish? Sea turtles looking for food can have trouble telling the difference. Saving The Waves / Instagram

If you ever feel like the world’s
plastic nightmare might never end, a new study shows proof that plastic pollution legislation actually works.

There are significantly fewer
plastic bags on the seafloor ever since a number of European countries introduced fees on the items, according to a 25-year study from the UK government’s Centre for Environment, Fisheries and Aquaculture Science (CEFAS).

Researchers found an estimated
30 percent drop in the number of plastic bags in waters around Norway, Germany, northern France and Ireland.

“It is encouraging to see that efforts by all of society, whether the public, industry, NGOs or government to reduce plastic bags are having an effect,” Thomas Maes, Marine Litter Scientist at CEFAS, said in a statement.

“We observed sharp declines in the percentage of plastic bags as captured by fishing nets trawling the seafloor around the UK compared to 2010 and this research suggests that by working together we can reduce, reuse and recycle to tackle the marine litter problem.”

Ireland and Denmark were the first two countries to introduce levies for single-use plastic bags in 2003. A number of European countries followed. In 2015, England became the last country in the UK to introduce a fee.

The study, published in the journal
Science of The Total Environment, was based on 39 independent scientific surveys of the distribution and abundance of marine litter on seabeds of the North Sea, English Channel, Celtic Sea and Irish Sea between 1992 and 2017.

Plastic trash such as bags, bottles and fishing debris were commonly observed over the entire 25-year period, with 63 percent of the 2,461 trawls containing at least one plastic litter item.

In a statement, Richard Harrington from the
Marine Conservation Society said the decrease in the number of plastic bags recorded in the surveys is “very encouraging.”

“It shows that fiscal measures can work—charging for what was once a free item, often used just once and thrown away, has had a real influence on consumer behavior without genuinely hurting people in the pocket,” Harrington said.

However, even though fewer plastic bags were recorded, the researchers found widespread distribution of other plastic items on the seafloor. They also noted a significant upward trend of fishing debris.

This means plastic bag legislation is merely a start in reducing the
8 million tons of plastic waste that gets dumped into our oceans every year.

As
WWF UK tweeted, “Great to see less plastic bags in our oceans, but we need the government to put an end to the use of all avoidable single-use plastic by 2025.”

In March, the UK government released a startling
report warning that plastic pollution in the world’s oceans is projected to increase three-fold within seven years unless action is taken.

To solve this plastic epidemic, the authors suggested solutions that range from preventing plastic from entering the sea, introducing new biodegradable plastics, and campaigns that raise public awareness about marine protection.