Are Plant-Eaters Smarter and More Empathetic Than Meat-Eaters? 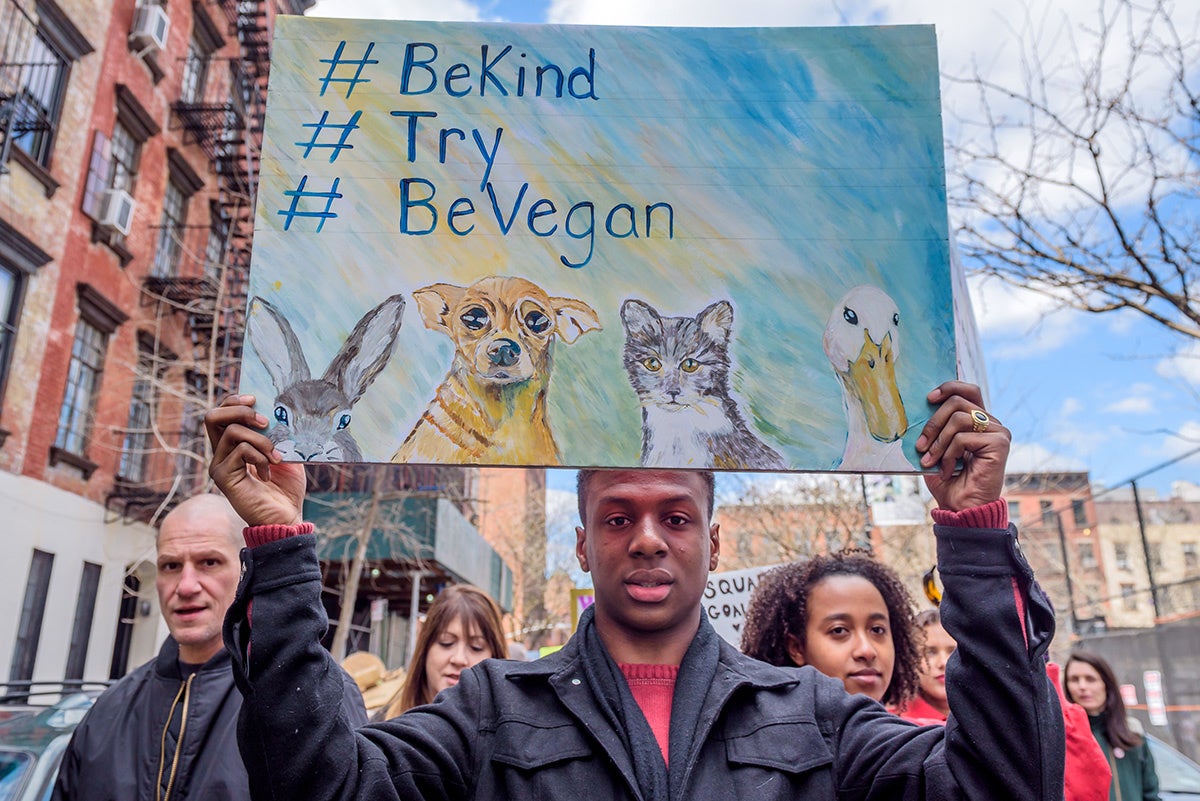 Wrapped inside the giant magnetic coil of an magnetic imaging resonance (MRI) scanner, three silent animal videos flash up and then disappear in front of a test subject’s eyes.

Each animal moves their mouth, contorting into shapes, which could be speaking, or not.

Five years ago, in the spring of 2013, a total of 60 subjects took turns to face functional MRI scans, a technique giving new insights in the workings of the mind, which feeds out images of brain slices showing when mental activity fills areas of the brain with oxygen or empties them out.

Twenty meat-eaters, 19 vegetarians and 21 vegans were put to the test.

Analyzing the results, the team led by Italian neuroscientist Massimo Filippi aimed to figure out if the three groups’ brains responded differently to these videos. Filippi’s previous study had tested whether people with different diets responded more or less strongly to animals that appeared to be in pain. But he wanted to find out something different, said Maria Rocca, another scientist on that team.

“Processing and understanding actions performed with the mouth by other individuals contribute to infer[ing] other people’s emotional states and intentions, which is a hallmark of social interaction,” explained Rocca. Roughly speaking, they wanted to know if meat-eaters’ and vegetarians’ brains were attempting to understand what the animals were trying to say.

Among their findings of the paper, called The ‘Vegetarian Brain,’ there were striking differences. On almost every area of the brain examined—parts associated with empathy, lip reading, comprehension—there were discernible variations between those who ate meat and those who didn’t.

In certain brain areas associated with empathy, meat eaters’ brains responded less to seeing humans make speech-like movement, echoing findings from other tests that showed increased activity in empathy circuits among people who do not eat meat for ethical reasons.

But figuring out where the human brain reacts was the easy part. The hard part: what—if anything—does it tell us about who we are?

Barely a month goes by without some new study making a claim about the link between meat consumption and human qualities. While there’s little doubt left that a vegetarian diet would be better for the environment and (generally speaking) better for our health, there’s less to say what it does to ourselves, or shows about the people we already are.

Trash science is a pound-a-penny, and there are few examples reaching the status that experts would see as providing real insight. Trace back any listicle on a vegan blog or YouTuber’s rant about vegetarians’ greater caring credentials, and you’re likely to find just a handful of trustworthy tests. Again and again, this small collection of science papers resurfaces.

Vegetarians have higher IQ, according to a British study still being ground up and churned out as new 12 years after it was first reported by the BBC in 2006.

The study, which spanned over 20 years, found intelligent 10 year olds, measured in 1970, were more likely to become vegetarians by the time they turned 30.

Hailed as a breakthrough longitudinal study indicating that intelligence and vegetarianism are linked, it’s unlikely that the scientific rigor of this study is what explains its longevity and interest. A less well-publicized U.S. study, released months later, flew in its face, finding no connection whatsoever.

Stories about food are rarely just about our mealtime preferences. Food intersects with identity for a lot of people, said Dahlstrom.

This may be one reason why it has become such a magnet for dubious science. An investigation by Buzzfeed News claimed Prof. Brian Wansink, who led Cornell’s food psychology research unit, the Food and Brand Lab, found that it had played fast and loose with statistics, shuffling data about pizza-eating, snacking and vegetarian diets for kids to create good headlines.

Many of Wansink’s papers extolled the virtues of healthy diets and were written to prove irresistible to online audiences. Wansink said he stands by his studies but is “re-analyzing” the data in a string of papers, after seven were retracted and 15 corrected, according to the Seattle Times.

This same effect has worked in reverse, with readers’ antipathy to findings being used to cast doubt on sound studies. A 2006 cross-sectional survey by the Medical University Graz in Austria reported people with vegetarian diets suffered higher rates of cancer, chronic allergies and mental illnesses, such as anxiety and depression.

Heralded as vindication for some omnivores and cause for cautious introspection by some vegetarians, it has since then taken its own place in the online world of dietary mudslinging. Its plant-eating detractors slammed its credibility with the same force they boost pro-vegetarian content.

Known as “The Austrian Study,” it has been lambasted by animal rights blogs as “quackery.” That’s overstating things, yet—as its authors acknowledge—the study is partial, incomplete and open to misinterpretation.

The British National Health Service intervened with its own analysis, highlighting the survey’s limitations—allowing people to self-report their diets, only including Austrians, saying nothing of cause and effect—and refuting newspaper reports that vegetarian diets caused disease.

Why do some food-based science stories elicit such a strong response?

“Being a vegetarian or being a meat-eater means more than just the food I eat, or the health effects or the price I pay—it means what kind of person I am,” said Dahlstrom. “Any story that affirms identities around these topics will be very engaging to the people who hold them. Science therefore gets pulled into these identify affirming stories even though the truth behind them is irrelevant.”

One claim stands out head-and-shoulders above the rest for plausibility: that vegetarians are more empathetic and thoughtful than their meat-eating counterparts.

This tends to get believed right out of the gate, at least by those who refuse to eat meat on moral grounds. It makes sense of the causal link—explaining why they are vegetarians in the first place.

The monkey, pig, human experiment was of this sort, but it was Filippi’s earlier study that went viral.

His test showing by functional MRI that vegetarians and vegans respond differently to images of animal pain than meat-eaters is among the most oft-repeated in online debates.

This study “provided the first scientific evidence of the dietary habits influences on brain circuits, where dietary choice was based on ethical reasons,” said Rocca.

For scientists who really care if vegetarians’ brains work differently from those of meat-eaters, new tools are getting closer to insights that circumvent the issues they’d had using more basic tools like the ones used in the Austrian survey. But in 2010, as functional MRI was giving neurological insights, something else was taking off: Social networks were becoming our primary forum for debate.

Dahlstrom says good science communicators bridge this gap by presenting truth in ways that earn engagement, but other communicators use engaging tactics to persuade untruth. “General audiences can use social media to share what they find the most engaging, regardless of truth,” he added.

Many of us non-scientists now get most of our science news through social media, so some understanding of where that news comes from is vital.

If you’ve ever clicked “Tweet” or “Share” on an article you’ve not really read, you’re not alone. A study of links shared on social media found 59 percent of them have never actually been clicked. In other words, most people appear to retweet news without ever reading it, and this the overwhelming norm for social media. Numerous studies have found that there is almost no correlation between what people share and what they actually read.

In a 1,700-word feature like the one you’re reading right now, perhaps less than 5 percent of readers will get to this point. If you have, congratulations—it’s a sign you’re more of a “truth-seeker,” to use Dahlstrom’s phrase, about your diet than most.

Which is why I’ve kept it to down here to say: The pig-monkey-human test is one example of the kind of study that could show us that dietary choices are linked to brain function. But it’s also the kind that has proved to vanish online, with no easy social media post.

Still, there remains the unanswered question of what exactly is more revealing about positive personal traits, like empathy: a functional MRI scan showing more activity in empathy-related brain areas in response to a pig in pain, or your broadcasting the findings of a scientific study you’ve barely looked at because you think it makes you look good?

After all, it’s worth asking what makes people share the findings of studies they haven’t even read, which is key in itself.

“For the group that does not have this need [that scientists have] to learn, what the study really suggests is irrelevant—what matters is how the story can benefit the individual to maintain or strengthen personal and social needs that they find more important than the truth of the topic at hand.”

Dahlstrom is sympathetic to people sharing on social media, saying regular people don’t have the same responsibility as journalists or professors, but also suggests we could become better seekers of the truth about diet and morality.

Matthew Ponsford is a London-based journalist and producer who has written for Thomson Reuters, CNN International, Financial Times, the Guardian, the Independent and Vice. Follow him on Twitter @mjponsford.