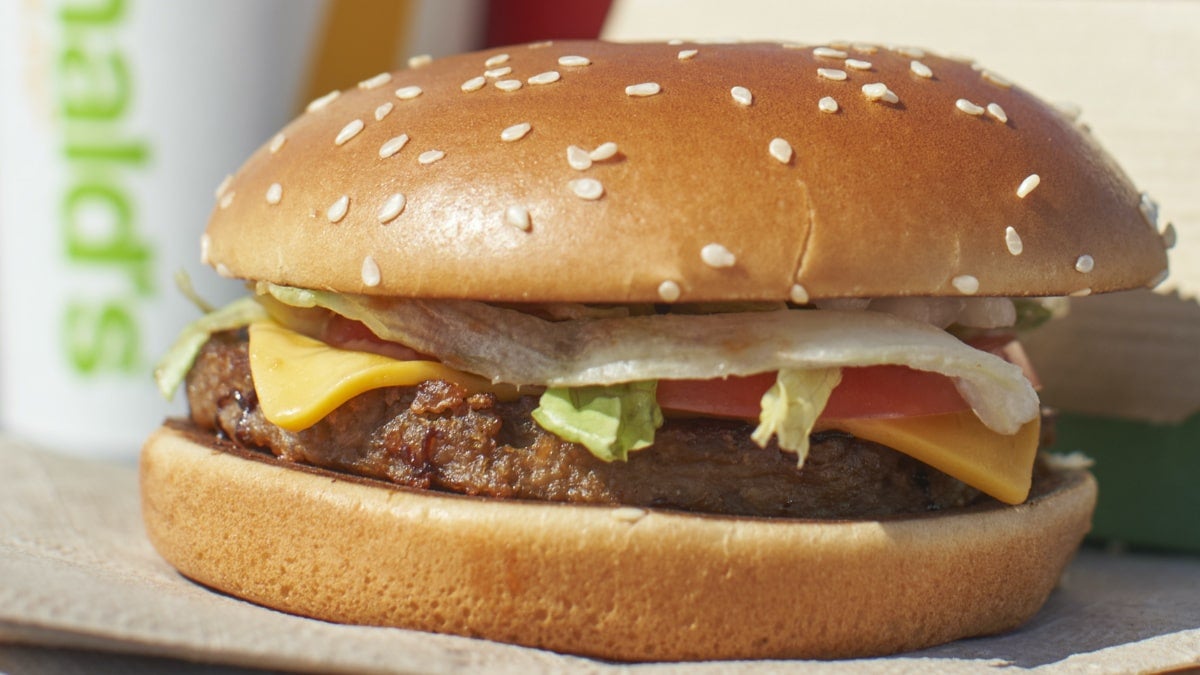 McDonald's P.L.T. plant-based burger is an example of the company's new plant-based line of products to launch in 2021. Geoff Robins / AFP / Getty Images

By Neil King and Gabriel Borrud

A new report published by the market research company Packaged Facts suggests that 23% of American consumers have eaten plant-based meat products — and an additional 37% are interested in trying them. Is this the future?

Bruce Friedrich is the founder and executive director of the Good Food Institute (GFI), an international non-profit organization based in Washington, DC that strives for alternatives to conventional agriculture products. DW’s environment podcast team “On the Green Fence” spoke with Bruce about the future of food as part of a series on meat consumption.

DW: What, in your opinion, is wrong with eating meat?

Industrial animal meat production causes more climate change than all forms of transportation combined. The United Nations looked at it. It said whatever issue we’re looking at from an environmental standpoint, industrial meat production is one of the top three causes – species loss, soil, desertification, water pollution. Right now, we’re all living through COVID-19, and the UN Environment Program just a couple of months ago asked, “How do we prevent the next COVID-19?” They listed seven things, and the first one was that we need less industrial animal meat production.

Ok, so eating meat is harming the Earth and humanity. But that collective knowledge isn’t going to stop us, is it?

Part of the problem is that for 50 years, environmentalists and global health experts and animal activists have been begging the public to eat less meat. And it’s just not working. It’s been a colossal failure. People are eating more and more meat even in developed economies. The UN is predicting we’re going to need to produce 50 to 100% more meat by 2050.

So instead of doing that, let’s give people everything that they like about meat. Let’s give people meat, but let’s make it from plants and grow it directly from cells. And we’ll have a fraction of the negative environmental consequences, including a fraction of the impact on the climate. It will free up vast quantities of land for carbon sequestration. It won’t require any antibiotics. We should be able to get to a place where it tastes exactly the same and gives people everything that they like about meat, but at a lower cost because of the efficiency gains.

But do you seriously believe that the majority of meat eaters will switch to plant-based products voluntarily?

What is meat? It’s made up of lipids, amino acids, minerals and water. That’s all it is. That stuff exists in plants. Scientists can solve this problem by bio-mimicking meat from plants. And for people who just want to eat animal meat, we can use standard tissue engineering techniques. We can grow meat directly from cells. It will be a healthier and more efficient product that frees up vast quantities of land. It’s really a win-win-win. We need a new space race essentially focused on food. The government that manages to divorce meat production from the need for living animals is going to have bragging rights until the end of time.

McDonald’s has announced plans to launch a plant-based line of products in 2021. How important is this development?

McDonald’s has more restaurants and more revenue than any other restaurant chain on the planet. They introduced America to the chicken nugget, and we expect that they will be introducing millions more Americans to plant-based meat with their plant line. When they do something, they do it deliberately, and they do it on a massive scale. So this means that they are certain there will be sustained demand, and that an assured supply chain will be in place by the time they launch. This is a massive development for the plant-based meat industry.

So aside from McDonald’s diversifying its product range, just how great a role do alternative meat products play in the market right now?

This is still very early days – we are still looking at products that are significantly less than 1% of the volume of meat sales. But animal meat production is pretty much as efficient as it is going to get and that is vastly inefficient. The most efficient animal at turning crops into meat is the chicken. It takes nine calories in the form of crops to get one calorie back out from a chicken. So the physiology of the chicken dictates 800% food waste. As plant-based products scale up, prices will come down and they will just become better and better environmentally when compared to industrial animal meat.

What do you see as the main obstacles to getting these alternative products into the mass market?

The only way to get mainstream acceptance is if the products taste the same or better and cost the same or less. And we are not there yet. The products cost more and often don’t give meat eaters everything they’re looking for from a taste profile perspective.

What about lab-grown meat? Is this a promising product or a dead end in your eyes?

We are very bullish on cultivating meat directly from cells. If you’re going to grow a chicken to slaughter weight and again, chicken is the animal that gets to slaughter weight most quickly, you’re going to have to plan years in advance to grow the crops, to feed the chicken. You need an entire flock of breeder animals. And even just the process of growing the chicken is going to take you six to seven weeks before it goes to the abattoir. With cultivated meat production, you can get that same growth in six days, not six weeks. So this is something we’re super enthusiastic about at this point.

How do you respond to critics who say that fake meat products are pumped full of unhealthy additives?

That’s just absurd. When you look at what makes a product healthy or unhealthy, we know that around 97% of people in Europe and North America are not consuming enough fiber. The most important macronutrients to be consuming are complex carbohydrates and fiber. Animal meat has none of either. Plant-based meat is an excellent source of both. We’re supposed to be eating less saturated fat, less or no cholesterol and no trans fats.

Plant-based meat vastly outperforms animal meat across all of these metrics as well. A study done by the Stanford School of Medicine showed that in just eight weeks the plant-based products caused statistically significant improvement in heart disease risk factors. They are clearly much healthier.

So when will these plant-based products actually make the inroads you’re hoping for?

On our current trajectory, meat production just goes up and up. 2019 was the highest per capita meat consumption in recorded history. This is planet-on-fire stuff. The former head of the World Health Organization said, we are literally looking at the end of modern medicine due to antibiotic resistance.

So, this is a global health crisis and an environmental crisis. We really need more entrepreneurs and more scientists to focus on this. And governments really need to wake up to the fact that this is deserving of lots of resources. Right now. It’s just getting drops, but it needs to get a fire hose.