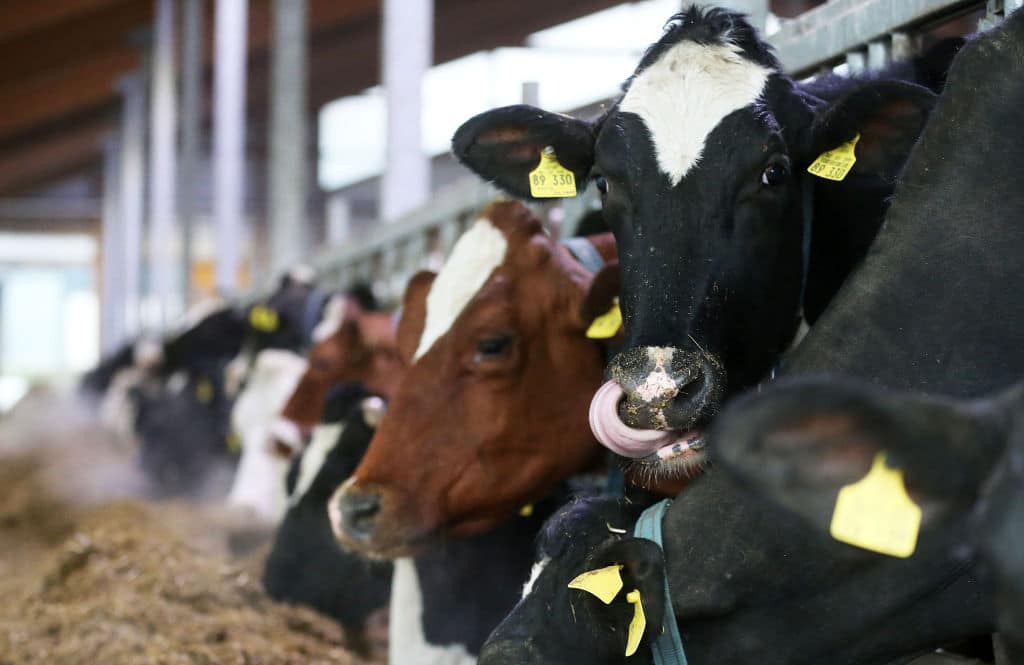 Cows eating in the barn before the grazing season. Farmers in the Eifel have started grazing and let their cows back out to pasture after the winter. Photo credit: Oliver Berg / Getty Images

One-fourth of the world’s greenhouse gas emissions come from food and agriculture, and in wealthy countries the majority of that is from livestock. Raising animals requires an enormous amount of land for grazing and growing fodder. If the high-income countries of the world reduced the meat content of their diets, more land would be open to use its natural processes to absorb carbon from the atmosphere. According to Our World in Data, nearly 80 percent of the world’s agricultural land is used for livestock, while meat produces less than 20 percent of the planet’s total calories, Carbon Brief reported.

“It’s a double whammy,” said one of the authors of the study, Dr. Paul Behrens of Leiden University, BBC News reported. “We know that shifting diets can save a huge amount of emissions from avoiding emissions from animal-based agriculture, but we can also save large amounts of land which can be used to sequester carbon from the atmosphere.”

The study looks at the effects on agriculture’s carbon footprint if 54 wealthy countries were to adopt the EAT-Lancet Planetary Health Diet, Carbon Brief reported. The mostly plant-based diet is “flexible by providing guidelines to ranges of different food groups that together constitute an optimal diet for human health and environmental sustainability.” According to the study, approximately half of the carbon reduction could come from the United States, France, Australia and Germany combined. Dr. Behrens told Carbon Brief that there are variations in the diet between countries depending on “local production and food cultures.”

The study asserts that by shifting to a more plant-based diet, wealthy nations could reduce their agricultural emissions by 62 percent, Carbon Brief reported. And raising less livestock could make an area larger than the European Union available for rewilding. The carbon captured by the end of the century would equal the equivalent of 14 years worth of the global agricultural emissions from 2010.

“It’s really about having a joined-up picture of food policy and land policy and climate policy at the same time and fundamentally re-aligning subsidies in order to harness this,” said Dr. Behrens, as BBC News reported.