Plankton Eating Plastic Caught on Camera for First Time Ever 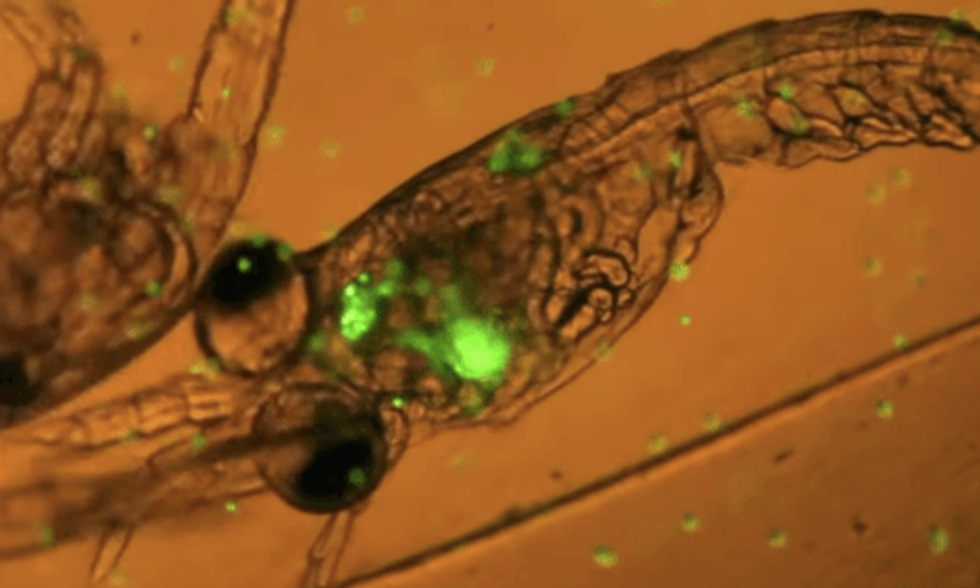 We know that plastic waste leaves a devastating trail, and now for the first time, we can actually witness it impacting the oceans' tiniest creatures. Zooplankton, the foundation of the marine food system, have been caught eating plastic in a new video from Five Films (via New Scientist).

The footage, captured under a microscope at the UK-based Plymouth Marine Laboratory, shows copepods consuming—and accumulating—fluorescent polystyrene beads measuring 7 to 30 micrometers in diameter.

"We were looking inside just one drop of water," Verity White of Five Films told New Scientist.

Plankton usually dine on algae, but with the 8 million metric tons of plastic waste being dumped into our oceans annually, it's no surprise that the little creatures are mistaking microplastics and degraded plastic scraps for food.

"The plankton were swimming and processing food non-stop," White added about the footage captured over a three-hour span.

According to New Scientist, researchers at Plymouth Marine Laboratory have also witnessed other types of zooplankton such as crab and oyster larvae accidentally eating these microplastics, which can remain in their intestinal tracts for up to one week if the zooplankton do not have access to actual food. Accidentally feasting on ocean plastic could thus impact plankton survival or reproduction rates, and ultimately move up the food chain as filter feeders dine on plankton.

Research from 5 Gyres Institute shows that only five to 10 percent of the plastic produced is recovered. 5 Gyres points out that while 50 percent of plastic is buried in landfills and some plastics are remade into durable goods, much of it washes out to sea. Unfortunately, this plastic pollution not only entraps or turns up in the stomachs of marine animals (ranging from plankton to large whales), these toxic particles pass on to us when we eat seafood.

"It’s not just the plastic that harms animals; the beads absorb toxic chemicals, making them poisonous to any creature that mistakes them for food or that eats another that has ingested the plastic—all the way up the food chain," as David Suzuki wrote about the scourge of ocean plastic. "Because humans eat fish and other animals, these toxins can end up in our bodies, where they can alter hormones and cause other health problems."

If you want to learn more about the global catastrophe of ocean plastic (and how you can help end it), check out this video from 5 Gyres Institute: