Pirates of Greed Get Away with Murder: Appeals Court Favors Japanese Whale Poachers 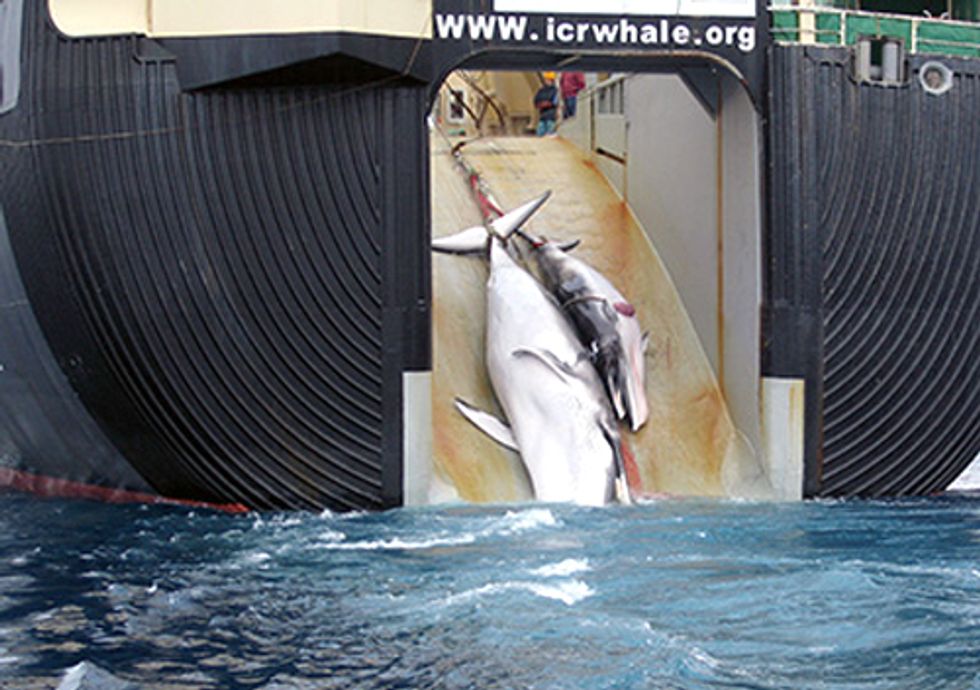 In response to the Ninth Circuit Court of Appeals opinion in a preliminary injunction hearing against Sea Shepherd Conservation Society U.S. as brought by Japan’s Institute for Cetacean Research (ICR)—a government-subsidized front for commercial whaling—the global marine conservation nonprofit calls the ruling a “bad decision,” but says the gavel hasn’t come down quite yet. A ruling from a pending trial and other legal actions are yet to come. Meanwhile, the group says Japan’s whale-poaching pirates of greed are literally getting away with murder—the murder of whales.

Moreover, Sea Shepherd has called for the case to be reviewed again before an eleven-judge Ninth Circuit Court panel. The Ninth Circuit Court issued a temporary injunction in December in favor of the Japanese whale-poaching fleet and against Sea Shepherd U.S.’s activities in the Southern Ocean, overturning a decision by the Honorable District Court Judge Richard A. Jones in March of last year. At the time, the temporary injunction was issued with no opinion whatsoever. The opinion was finally issued late Monday and ignored the well-reasoned ruling in Sea Shepherd’s favor by Judge Jones.

In this most recent ruling, the Ninth Circuit called Sea Shepherd “pirates,” but it is indeed the whale poachers who are the real pirates in this scenario—pirates of greed and murder. At a press conference at the National Press Club earlier this month, iconic environmental attorney Robert F. Kennedy, Jr., president of Waterkeeper Alliance, echoed that sentiment about the ICR:

“ … The Institute for Cetacean Research, which is an arm of the Japanese government, is really a pirate organization masquerading as a scientific research group. … If you are violating international law on the high seas, you are a pirate.

“And we have in our country a long and proud history of battling piracy on the high seas, beginning in 1805 when Thomas Jefferson sent the marines to Tripoli to subdue the Barbary Pirates. And we ought to be, not trying to impede Paul Watson and Sea Shepherd, but we should be issuing him letters of marque in order to support and recognize the important value of his activities to our country and to the world community in battling a pirate organization that is in violation of international laws. He is performing a profound public service for all of us and instead of recognizing him, the U.S. government, various agencies of the U.S. government, have attempted to impede him.”

Letters of marque were historically used by governments many years ago to seize genuine pirate ships. They were a government license authorizing a person (known as a privateer) to attack and capture enemy vessels and bring them before admiralty courts for condemnation and sale.

In addition, in a highly questionable and unprofessional move, the three-panel member of the Ninth Circuit Court called into question Judge Jones’ well-articulated ruling in which he said Sea Shepherd was acting in the public interest for the protection of wildlife and the Earth. He also reasoned further that the group’s activities amount to nothing more than low-level harassment. Still, clearly unconcerned with the plight of the planet, the Ninth Circuit made a rare and unwarranted decision that Jones should be removed from the case, with one of the three judges dissenting on that ruling.

“Clearly, this is a bad decision by the Ninth Circuit Court, but not unexpected,” said Scott West, director of intelligence and investigations for Sea Shepherd U.S. “But it’s an opinion; everyone has one. We happen to agree with Judge Jones' very well articulated and reasoned opinion on the matter,” he stated.

“Beyond that, the vitriolic and grandstanding manner in which the Ninth Circuit rendered its opinion makes us seriously doubt their qualifications for making a just decision. This court is part of the problem, not the solution. Not only is there no room for such a biased and unprofessional legal opinion, they somehow have the audacity to throw a highly respected, honored judge—one of their own—under the bus in order to side with foreign interests. Is this a decision of an American court or have we somehow mistakenly landed in Japan?” West added.

Sea Shepherd U.S. will continue to seek relief with regard to the injunction by going back to the full Ninth Circuit Court (En Banc) and a hand-picked judge of the U.S. Supreme Court. A first foray to the designated Supreme Court Justice was denied.

“We will continue to use the courts and the law to overturn these rulings,” said Charles Moure, lead counsel with Harris & Moure, Seattle, Wash. “We have a long, hard fight ahead of us but Judge Jones was correct when he said Sea Shepherd is working in the public interest for the greater good. Sea Shepherd has the court of public opinion on its side, backed by thousands of supporters worldwide, something the Japanese whale poachers will never have. The organization is prepared to take on these challenges, believing that in the end, justice will prevail and Judge Jones’ courageous opinion will become the law of the land,” he concluded.