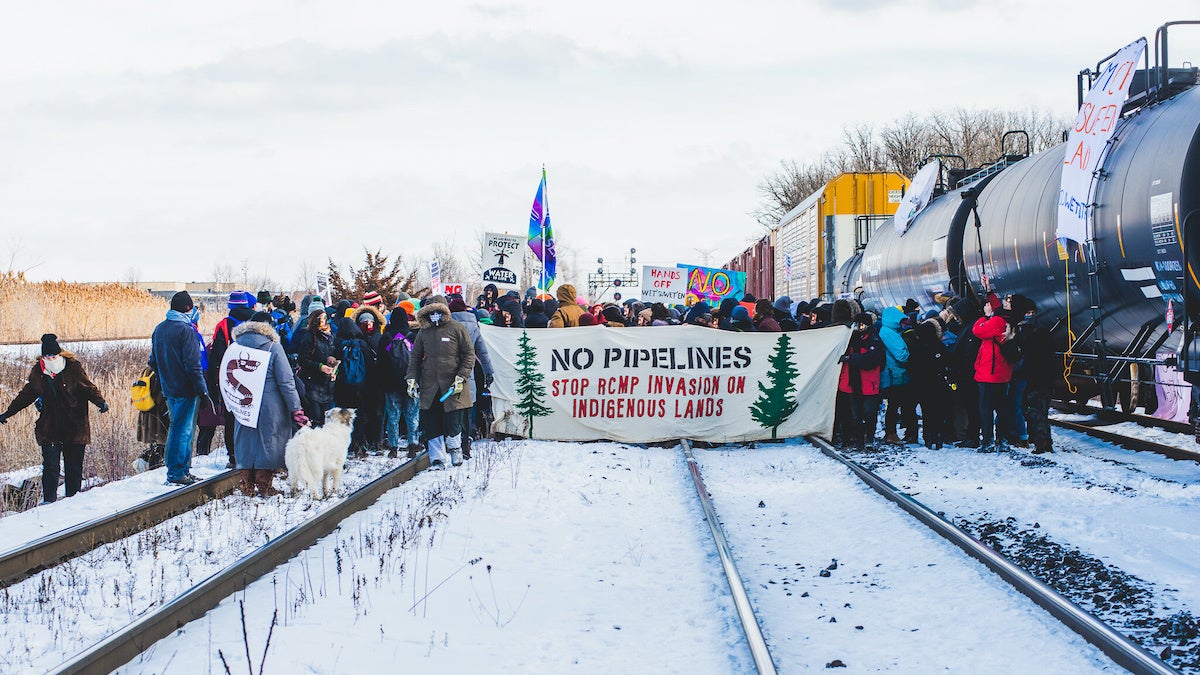 Land defenders and protestors gather for a direct action on the second largest rail classification yard in Canada on Feb. 15, 2020. Jason Hargrove / Flickr

Anti-pipeline protests have shut down major rail networks across Canada as indigenous rights and environmental activists act in solidarity with the Wet’suwet’en people of British Columbia, who are fighting to keep a natural gas pipeline off their land.

Canadian National Railway (CN) said Thursday it would shut down its freight network east of Toronto in response to rail blockades, CNN reported. The same day, VIA Rail, which predominantly uses CN tracks to run passenger trains, said it was suspending the majority of its service. Then, on Sunday, CN announced 1,000 temporary layoffs, The Globe and Mail reported.

“It’s our future that’s going to be destroyed – it’s really important for youth,” 17-year-old Malika Gasbaoui, an Ojibwa-Métis from the Laurentians in Quebec who visited one of the blockades, told The Globe and Mail.

Gasbaoui was visiting a blockade in the Tyendinaga Mohawk Territory near Belleville, Ontario, which has cancelled train trips for more than 83,000 people since it began. The blockade was launched Feb. 6 in response to a Royal Canadian Mounted Police (RCMP) raid on camps set up by the Wet’suwet’en to block the construction of the billion Coastal GasLink pipeline, according to CBC News. The demonstrators say they will maintain the blockade until the RCMP leave Wet’suwet’en territory.

Another blockade in the Kahnawake Mohawk Territory outside Montreal has shuttered a commuter rail into the city, The Globe and Mail reported. Anti-pipeline activists also held weekend demonstrations in Vancouver, Vaughan, Ontario and Niagara Falls, Ontario.

At stake is not just the environmental impacts of the pipeline, but the sovereignty of the Wet’suwet’en Nation. The pipeline company got permission from Wet’suwet’en elected councils to build the pipeline, but not the hereditary chiefs who say they never surrendered their control of the land to the Canadian government, CTV News explained.

“These shouldn’t be viewed as anti-pipeline protests. These are really demonstrations by Indigenous people all over the country to say we don’t want the government using the RCMP to violently take down people who are living on their own territories,” indigenous rights activist Pamela Palmater told CTV.

Both CN and the Canadian Chamber of Commerce have asked the government to remove the blockades, arguing that they were harming the country’s economy, CNN reported.

“Until we have rail service resumed, I would say no level of government is fulfilling its duties to help uphold the rule of law and ensure that commerce can flow freely throughout our country,” Ryan Greer, senior director of transportation policy for the Canadian Chamber of Commerce, told CTV Thursday.

CN did obtain an injunction to end the Belleville blockade, but the police have not enforced it, according to CNN.

The Canadian government said Sunday it hoped to resolve the tension through dialogue, The Globe and Mail reported. Indigenous Services Minister Marc Miller pointed to two raids on indigenous camps in the 1990s that had ended poorly.

“My question to Canadians, my questions to myself and to fellow politicians regardless of the party, is whether we do things the same old way and repeat the errors of the past, or do we take the time to do it right?” he told The Globe and Mail.