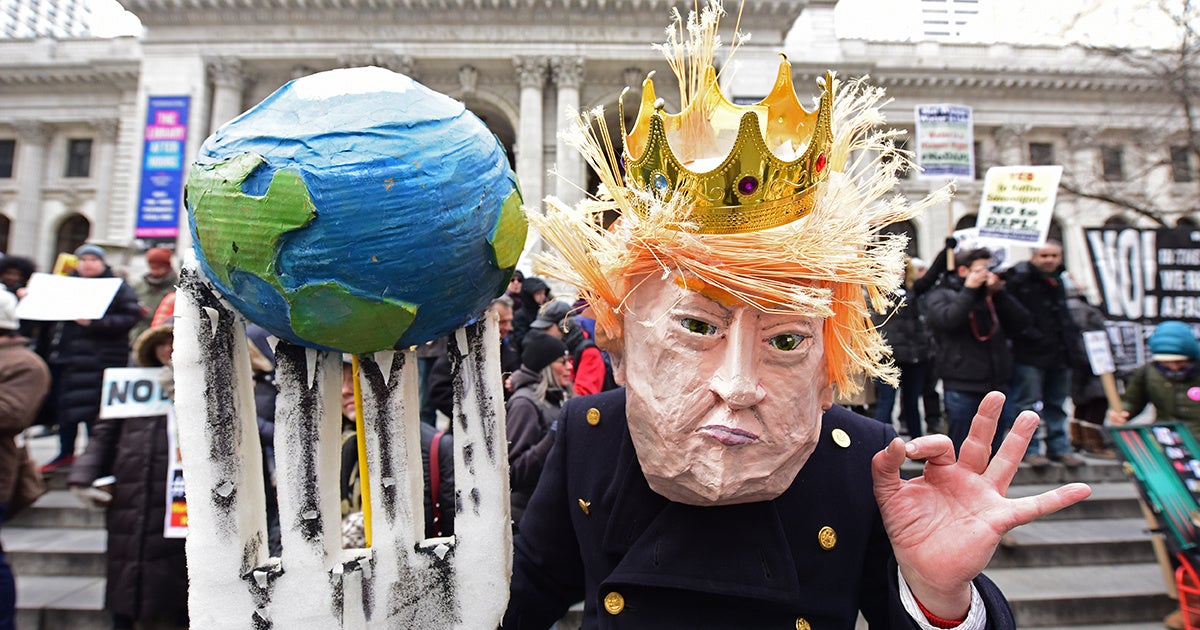 A protester wearing a mask that looks like Pres. Trump. An estimated one thousand activists gathered in front of the New York City Public Library Main Branch for a rally against the Dakota Access Pipeline project & in solidarity with the Standing Rock activists. Andy Katz / Pacific Press / LightRocket / Getty Images

Building on efforts by multiple states to crack down on those fighting the construction of climate-destroying fossil fuel infrastructure, the Trump administration unveiled a proposal on Monday that would criminalize pipeline protests at the federal level and hit demonstrators with up to 20 years in prison.

The new proposal, released by Transportation Department’s Pipeline and Hazardous Materials Safety Administration, was immediately denounced by environmentalists as a serious threat to the First Amendment.

“This dangerous proposal threatens to undermine Americans’ right to peaceful assembly and free speech,” Kelly Martin, director of the Sierra Club’s Beyond Dirty Fossil Fuels campaign, said in a statement. “It is a blatant attempt to intimidate those who would exercise their First Amendment rights to speak out against pipeline projects that put our clean water, communities, and climate at risk.”

“Rather than focusing on shielding corporate polluters from public protest,” Martin said, “the administration should be working to ensure that communities are protected from dirty, dangerous fossil fuel projects.”

As Politico reported Monday, the Transportation Department’s proposal would “treat some pipeline protests as a federal crime, mirroring state legislative efforts that have spread in the wake of high-profile demonstrations around the country.”

The Trump administration, according to Politico, is “calling for Congress to expand a law that threatens fines and up to 20 years’ prison time for ‘damaging or destroying’ pipelines currently in operation. The expanded version would add ‘vandalism, tampering with, or impeding, disrupting, or inhibiting the operation of’ either existing pipelines or those ‘under construction.'”

So. Yeah. This is very very bad (and also just the latest in a trend that started in oil-friendly states): Trump pushes up to 20 years in prison for pipeline protesters https://t.co/yuqiNHibLf via @thinkprogress

Elly Page, attorney for International Center for Not-For-Profit Law — an organization that has tracked anti-protest efforts by individual states — told Politico that the Trump administration’s “proposed penalty is far and away more extreme than what we’ve seen at the state level.”

“When you combine provisions that vague to penalties that extreme,” Page said, “that creates uncertainty about what is and isn’t legal.”

House Democrats signaled that they would oppose the measure, which comes just two weeks after the Texas state Senate passed a bill that would hit pipeline protesters with up to 10 years in prison.

A spokesperson for House Energy and Commerce chairman Frank Pallone (D-N.J.) told Politico that the congressman “has no intention of allowing a pipeline safety bill to be used as a vehicle for stifling legitimate dissent and protest.”

On Twitter, the Natural Resources Defense Council warned that as “we grapple with the mounting climate catastrophe, the fossil fuel industry is holding nothing back in its attempt to silence its critics and those who assemble to protest their destruction of our shared climate.”