Pipeline Posse Tells Ed Schultz: 'It's Not About the Money, It's About the Future Generations' 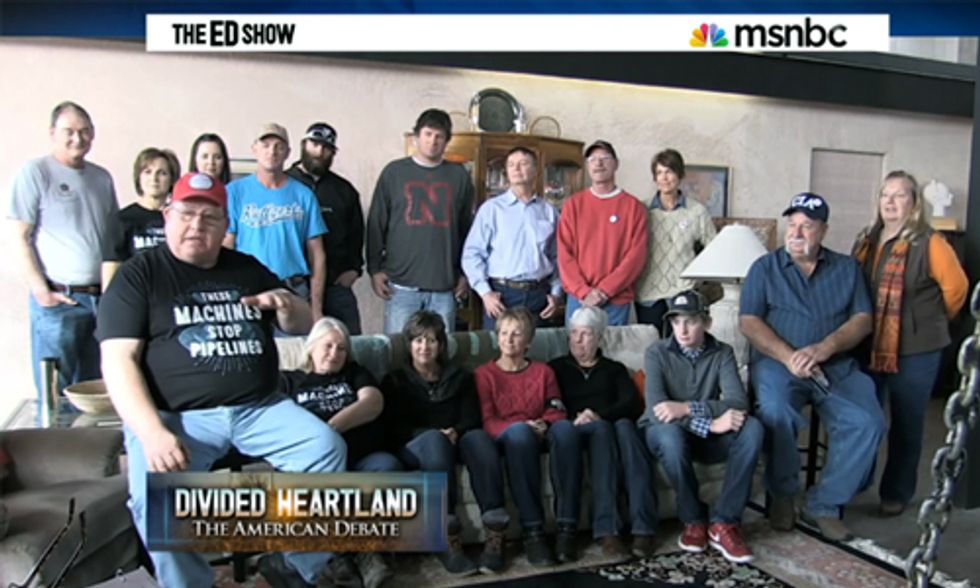 As the Senate continues to debate the Keystone XL, MSNBC's Ed Schultz traveled to Nebraska to meet with landowners that are taking a strong stand against the tar sands pipeline.

"These Americans are standing up to special interests and refusing to let their future be decided by Republicans who just don't understand the issues," said Schultz on last nights The Ed Show.

Ed Schultz meets with the Pipeline Posse in Nebraska last weekend to learn more about the landowners that are taking a strong stand against the Keystone XL pipeline.

The Nebraskans Schultz met with call themselves the "Pipeline Posse," more than 100 landowners that claim they have the legal muscle to stop the pipeline. Schultz also spoke with Brian Jorde, the lead attorney on the eminent domain cases, who claims that this pipeline won't be built anytime soon.

Nebraska landowner Jim Carlson shared that he's been offered by TransCanada $307,000 to allow the pipeline on his land. When Schultz asked him if he can be bought, he said, "No, because my land is worth more to me and my family than any amount of money they could offer me, or would offer me."

Bold Nebraska executive director Jane Kleeb shared with Schultz her disgust with misinformation being spread by lawmakers, both Democrat and Republican. Sen. "Joe Manchin [D-W.Va.] needs to actually get on the page of fact verses a talking point memo he's been given by TransCanada or API," Kleeb told Schultz.

"It's not about the money, it's about the future generations," the Pipeline Posse told Schultz.

Watch here as Schultz talks with the folks who are willing to put it all on the line to stop the Keystone XL pipeline: