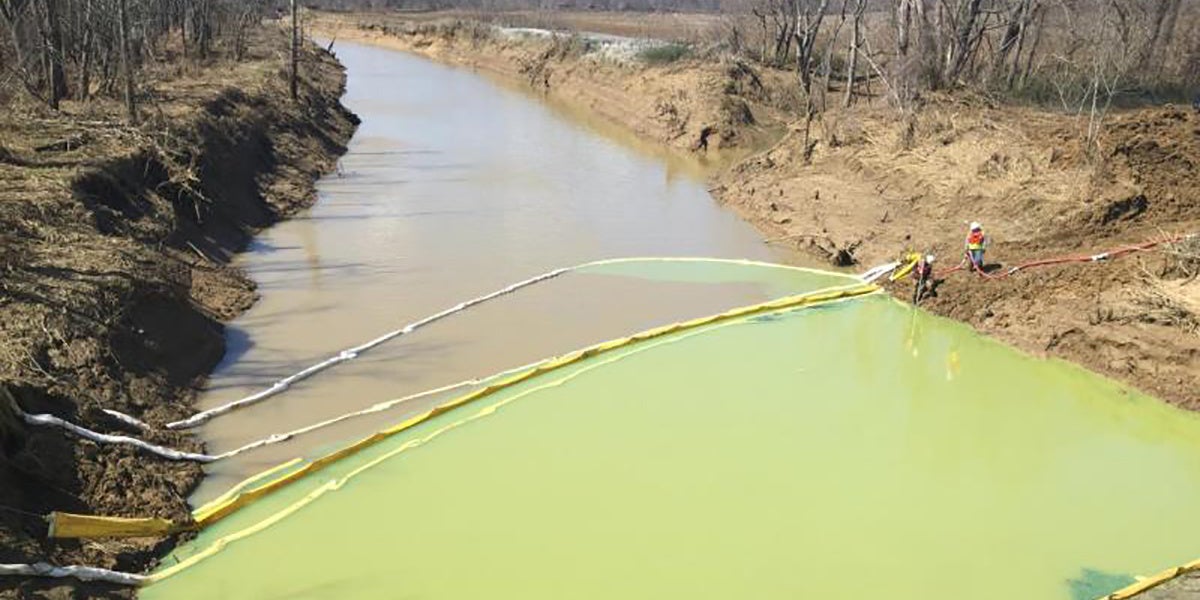 The pipeline was immediately shut off, and workers contained the spill with two booms before it reached the Wabash River.

Kevin Turner, the on-the-scene coordinator for the U.S. Environmental Protection Agency (EPA), told The Indianapolis Star that it was “considered a large spill.”

Fortunately, Turner told The Star that he did not think the spill would impact wildlife. No fish deaths have yet been reported, and it is too early in the year for migratory songbirds to have arrived, he said.

The spill traveled four miles before it was stopped by the booms. “If the product had made it to the Wabash, then we would not be able to collect any of it,” Turner told The Star.

Marathon was moving the fuel from its refinery in Robinson, Illinois to its terminal on the Ohio River in Mount Vernon, Indiana.

Turner told The Star that efforts were now underway to recover the fuel, a process that should take about a week. He expected 60 percent of the diesel to be skimmed.

According to The Star, this is not the first time that a Marathon pipeline has leaked. In April 2016, 48,300 gallons of oil spilled into the Wabash River from a pipeline near Mount Carmel, Illinois near the Indiana border.

That leak was caused by the fact that erosion had exposed the pipeline, which had been buried beneath the river, to the river bottom itself.

Marathon spokesperson Shane Pochard told The Star that the cause of the current spill is unknown but investigations are underway with help from the Indiana Department of Transportation’s Office of Pipeline Safety.

The spill comes as pipelines are under increasing scrutiny in North America.

Indigenous groups and environmental activists ramped up protests this week against the proposed Kinder Morgan Trans Mountain pipeline extension from the Alberta tar sands to Vancouver, BC.

In 2017, environmental groups sued the Trump administration over the president’s decision to approve the controversial Keystone XL pipeline, reversing the decision by former President Barack Obama to cancel the project.

And, according to The Intercept, the Dakota Access pipeline, which was the subject of massive protests by the Standing Rock Sioux and their allies, leaked five times in 2017.

In 2016, Undark reported that there had been more than 1,300 crude oil spills from pipelines in the U.S. since 2010, averaging one every other day. While pipelines lead to fewer spills than transporting oil by rail, the other overland option, the Congressional Research Service, the U.S. State Department, International Energy Agency and the Fraser Institute found that pipeline spills release more crude into the environment, Business Insider reported.