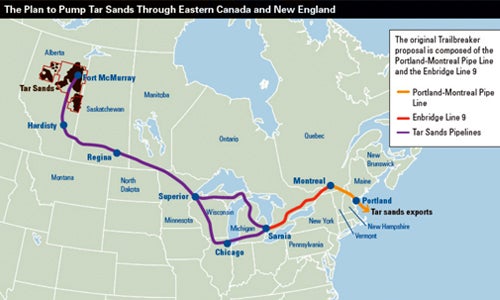 The National Energy Board of Canada approved this week a proposal by pipeline giant Enbridge to reverse and increase the flow of crude oil, including tar sands oil, in its pipeline from Sarnia, Ontario to Montreal, Quebec—for the first time directly connecting Alberta’s tar sands to Montreal. This means that tar sands oil—or “diluted bitumen”—can come to Montreal, where the Portland-Montreal Pipeline is then an obvious route for the oil industry to access an export port to send tar sands to the world market.

Citizens, conservation groups, outdoor recreational interests and elected officials in Maine expressed alarm at the decision and called on Maine’s elected officials to ensure the U.S. State Department requires a new Presidential Permit review before tar sands could ever flow through Maine.

“Today’s decision brings toxic tar sands oil right to New England’s doorstep, and one step away from flowing south through Vermont, New Hampshire and Maine,” said Dylan Voorhees, clean energy director for the Natural Resources Council of Maine. “This decision should put Maine on high alert for the threat of tar sands transportation through our state. That would be unacceptable. Now is the time for the U.S. State Department to commit to an environmental review of any tar sands project in our state.”

The Portland-Montreal pipeline passes along and under the Androscoggin River, crosses the Crooked River six times throughout its watershed, passes alongside Sebago Lake and under a cove of the lake itself, and ends on Casco Bay in South Portland.

In 2013, South Portland passed a temporary moratorium on tar sands export infrastructure, and the towns and citizens of Casco, Harrison, Otisfield, Portland, Raymond and Waterford all passed resolutions expressing serious concern with or downright opposition to tar sands oil flowing through the pipeline in their towns.

“Last year Casco passed a resolution of opposition because of threats to our waters, recreation, and local economy,” said Mary Fernandez, chair of the Casco Selectboard. “We don’t want to end up like Mayflower, Arkansas or Kalamazoo, Michigan. We called on our federal delegation to help us, and that’s all the more important now.” 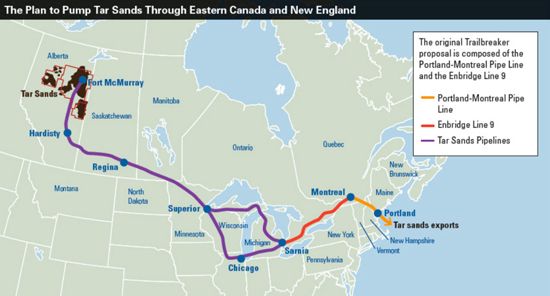 “Tar sands pose the most significant threat to Sebago Lake that I’ve seen in my 34 years of fishing on the lake,” said Eliot H. Stanley, Board Member for Conservation, Sebago Lake Anglers Association. “The fact is that a tar sands pipeline spill into the Sebago-Crooked River watershed would devastate the lake, its fisheries, and southern Maine’s clean drinking water supply. We cannot permit another Kalamazoo River catastrophe. This irresponsible action by the Canadian Energy Board poses a threat to all Maine citizens and public officials.”

“We’ve been expecting today’s news, and it only redoubles our commitment to keep tar sands out of Maine by preventing it from being shipped out of Casco Bay. For our coast, our water and our climate, we simply will not allow tar sands to flow through our beautiful state,” said Environment Maine Director Emily Figdor.

In 2013, in response to pressure from Congresswoman Chellie Pingree, Congressman Mike Michaud, and others, the U.S. State Department, which has jurisdiction over interstate oil pipelines, officially told the Portland Pipe Line Corporation that it should notify the State Department about plans to reverse its own pipeline to carry tar sands. However, the agency has not yet announced whether it would require a new Presidential Permit or any environmental review for a tar sands reversal of the Maine pipeline

“Maine people are counting on the Obama Administration, with the support of Maine’s Congressional delegation, to require a new Presidential Permit process and an objective environmental review of the risks posed by pumping dirty tar sands oil through our communities, rivers, lakes and bays, including Sebago Lake and Casco Bay,” said Glen Brand, Sierra Club Maine Chapter Director.

Hundreds of Maine citizens have written to or called Senators Susan Collins and Angus King, urging them to take a firm public stand for a Presidential Permit and environmental review.

“As Mainers, we have to do everything we can to protect Sebago Lake, our largest public water supply, and its surrounding wetlands,” said Bob Klotz of 350 Maine. “All we have to do is look to the Kalamazoo River spill that occurred in 2010 and its 40 miles of still-contaminated waterways to know this is a disaster we can’t allow to happen here in Maine.”

Also last year, citizens in South Portland brought forward a citizen-initiated ordinance to protect the city from construction of a tar sands export terminal, including the construction of smokestacks on the waterfront required to burn off toxic gases emitted when loading tar sands onto tankers. When the ordinance fell just short of passage, the South Portland City Council adopted a six-month moratorium on any tar sands project in the city in order to provide time for drafting a new ordinance with the same purpose.

“Considering today’s decision, I’m particularly relieved that our city has established a moratorium on a tar sands project here,” said Eve Raimon, a citizen leader with Protect South Portland. “This makes the work of drafting and adopting a permanent ordinance to restrict a tar sands export terminal on our waterfront all the more essential and urgent.”

In its public statements over the past two years, the Portland Pipe Line Company has vacillated multiple times between denial and enthusiasm for a tar sands project for Maine. After a stint of denials of an active project last fall, oil companies ran ads in South Portland newspapers this week promoting Canadian “oil sands.”

Citizens and public interest organizations in Quebec and Ontario strongly oppose sending tar sands through their communities and across their watersheds.

In 2010, about 14,000 citizens from the New England region sent comments to the National Energy Board opposing the tar sands reversal of Line 9. Included were approximately 2,000 from Maine.

“After today’s disappointing news from Canada, Maine needs to send a strong, clear message that we will not be next,” said Voorhees. “We again call on our Congressional delegation to lead and defend Maine’s interests.”