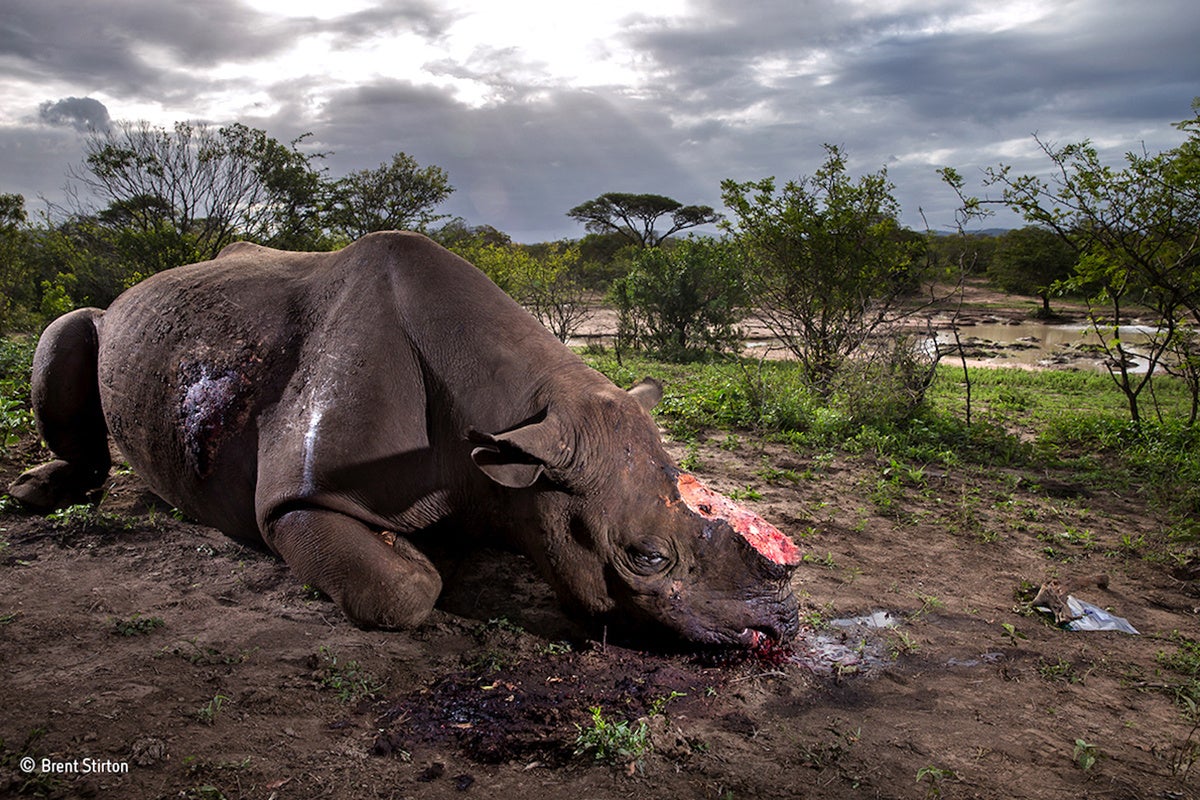 Africa loses an average of three
rhinos a day to the ongoing poaching crisis and the illegal rhino horn trade. In 2016 alone, 1,054 rhinos were reported killed in South Africa, representing a loss in rhinos of approximately six percent. That’s close to the birth rate, meaning the population remains perilously close to the tipping point.

This year, the
Natural History Museum in London awarded photographer Brent Stirton the 2017 Wildlife Photographer of the Year grand title for his grisly image of a black rhino with its two horns hacked off in South Africa’s Hluhluwe-Imfolozi Park.

“Brent’s image highlights the urgent need for humanity to protect our planet and the species we share it with,” said Natural History Museum director Sir Michael Dixon.

Stirton’s photograph, “Memorial to a species,” emerged as the winning shot from almost 50,000 competition entries from 92 countries. The photo also won of the “Wildlife Photojournalist Award: Story” category.

“The killers were probably from a local community but working to order,” the caption from Stirton’s photograph states. “Entering the Hluhluwe Imfolozi Game Reserve at night, they shot the black rhino bull using a silencer. Working fast, they hacked off the two horns and escaped before being discovered by the reserve’s patrol. The horns would have been sold to a middleman and smuggled out of South Africa, probably via Mozambique, to China or Vietnam. For the reserve, it was grim news, not least because this is where conservationists bred back from near extinction the subspecies that is now the pre-eminent target for poachers, the southern white rhino. For the photographer, the crime scene was one of more than 30 he visited in the course of covering this tragic story.”

Striton is a senior correspondent for Verbatim and Getty Images and shoots mainly for
National Geographic
. His work focuses on conflict, sustainability and the environment. He’s won a slew of photojournalism awards in the past but this was the first time he was given the Wildlife Photographer of the Year grand title.

He said he was “blown away” by the honor.

“This year’s winning image conveys a powerful and disturbing message from a master storyteller, shining a light not only on a species being pushed to the brink of extinction, but also on the issues of human morality and compassion for the animals we share this planet with,” said science and wildlife presenter Liz Bonnin.

The Wildlife Photographer of the Year,
#WPY53, exhibition opens at the Natural History Museum in London on Friday, Oct. 20 and runs until May 28. The next competition,
#WPY54, opens for entries on Oct. 23.

Scroll down to see a selection of the other award-winning photographs. 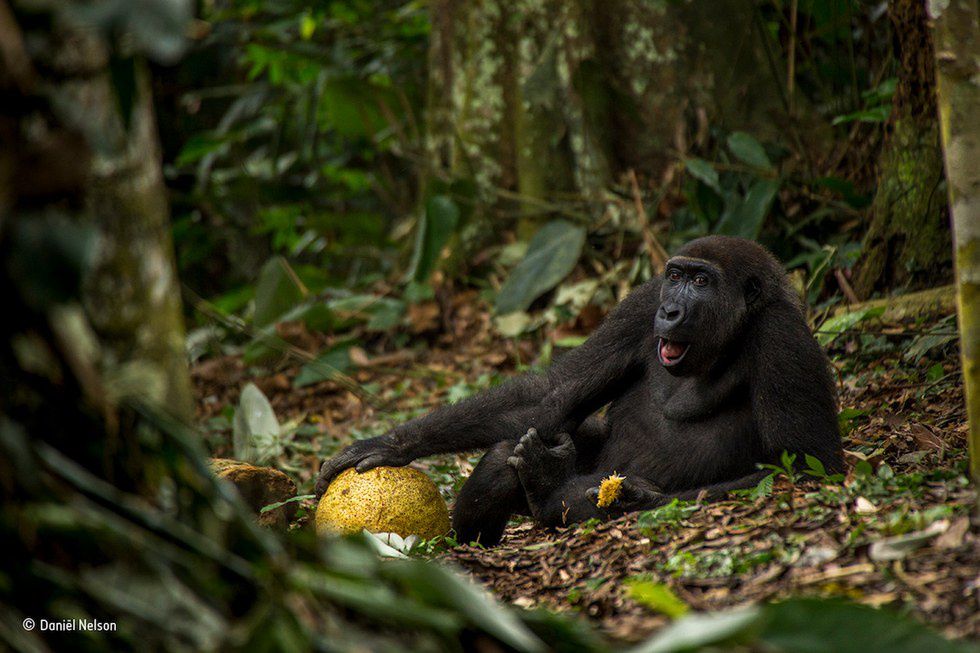 Daniël met Caco in the forest of Odzala National Park in the Republic of Congo. Western lowland gorillas are critically endangered, threatened by illegal hunting for bushmeat (facilitated by logging and mining roads), and disease (notably the Ebola virus). 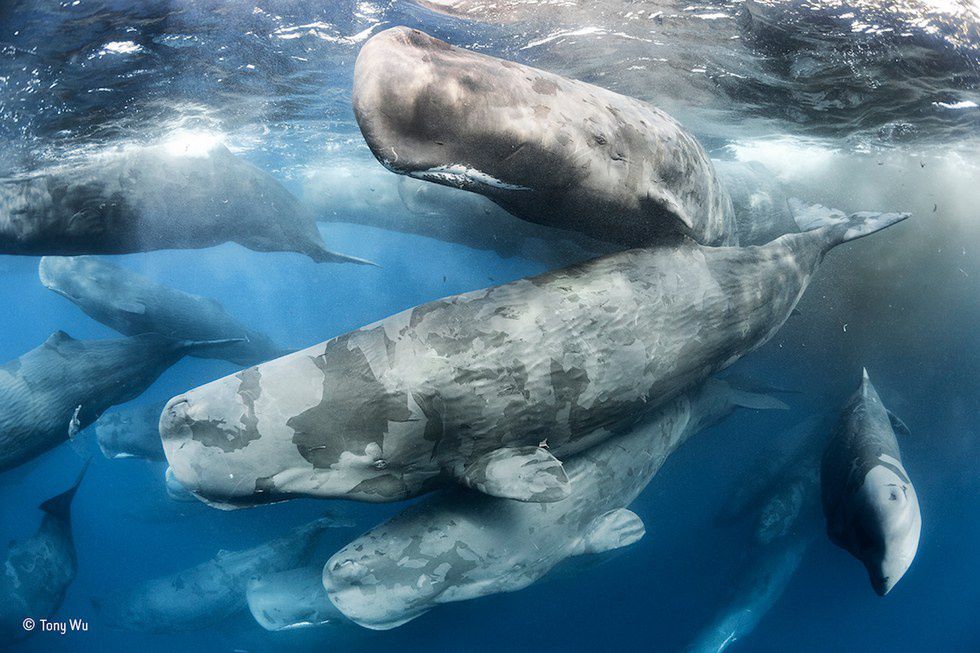 Dozens of sperm whales mingled noisily off Sri Lanka’s northeast coast, stacked as far down as Tony could see. This was a congregation of dozens of social units, like a gathering of the clans. Aggregations like this could be a critical part of the whales’ rich social lives but are rarely reported. Some two thirds of the population was wiped out before commercial whaling was banned in 1986. This kind of major gathering could be “a sign that populations are recovering,” said Tony. 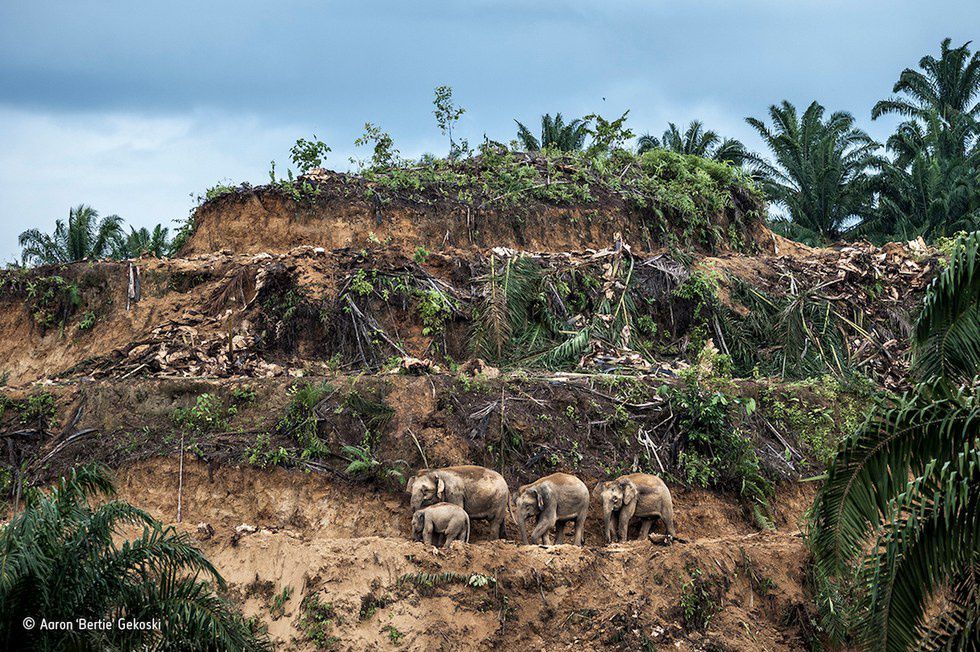 In eastern Sabah, on the island of Borneo, three generations of Bornean elephants edge their way across the terraces of an oil-palm plantation being cleared for replanting. Palm oil is a lucrative global export, and in the Malaysian state of Sabah, where the majority of rainforest has already been logged (only eight percent of protected intact forest remains), the palm-oil industry is still a major driver of deforestation, squeezing elephants into smaller and smaller pockets of forest. 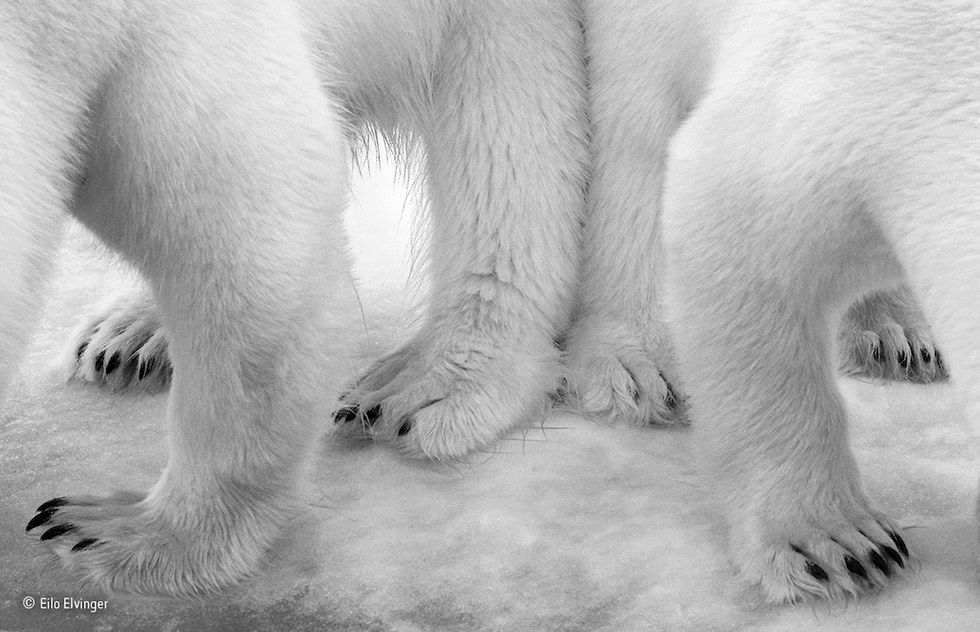 From her ship anchored off Svalbard, in Arctic Norway, Eilo spotted a polar bear and her two- year-old cub in the distance, slowly drawing closer. Nearing the ship, they were diverted to a patch of snow soaked in leakage from the vessel’s kitchen and began to lick it. “I was ashamed of our contribution to the immaculate landscape,” said Eilo, “and of how this influenced the bears’ behavior.”