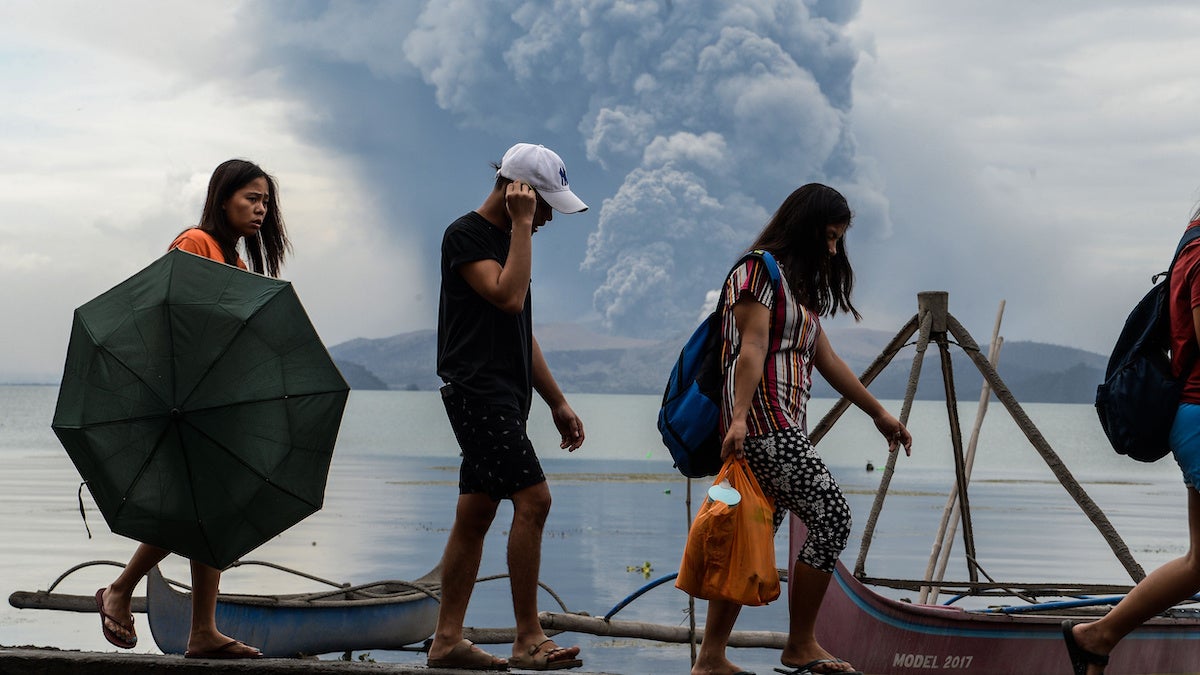 Residents walk past the eruption of Taal volcano in the Philippines Monday. TED ALJIBE / AFP via Getty Images

The second-most active volcano in the Philippines belched to life on Sunday when it sent a cloud of ash miles into the air that forced thousands to evacuate and shuttered the airport in the capital of Manila.

The eruption of the Taal volcano continued Monday when it began gushing lava, The Associated Press reported. People living nearby also felt tremors, and the country’s volcanic institute warned of a potential “volcanic tsunami” in the lake that surrounds the volcanic island, according to The New York Times.

“The earthquakes were strong, and it felt like there was a monster coming out,” Cookie Siscar, who heard about the eruption from her husband Emer, told The New York Times.

Streaks of lightning blazed through columns of ashes amid #TaalVolcano eruption as seen from Nasugbu, Batangas on Sunday evening. Photo from Domcar Lagto, ABS-CBN News pic.twitter.com/e3Rh5wDOzb

The Philippine Institute of Volcanology and Seismology raised the volcano’s Alert Level to four out of five Sunday evening, indicating that a “hazardous eruption” is “imminent.”

Taal volcano is located on an island around 40 miles south of Manila in the Philippines’ Batangas province, according to The New York Times. Around 6,000 people live on the island itself, but people in the surrounding areas are also at risk. More than 13,000 people in Batangas and nearby Cavite province have been evacuated to shelters so far, according to The Associated Press. But authorities expect that number to balloon. More than 450,000 people are estimated to live within the volcano’s danger zone, the Official United Nations Office for the Coordination of Humanitarian Affairs (OCHA) said.

Over 450,000 people are estimated to be residing within the 14 km danger zone of the Taal Volcano. On 12 January, alert level 4 was raised and surrounding towns were evacuated. As of 6 a.m. today, @NDRRMC_OpCen reports that over 7,700 people are in 38 evacuation centres. pic.twitter.com/td0Yj0S6Cj

According to BBC News, Batangas province has already declared a “state of calamity.”

So far, the major impact has been ash. The volcano sent ash, steam and pebbles six to nine miles into the air Sunday, The Associated Press reported. The ash spread more than 62 miles north of the volcano, reaching Manila, where it forced the international airport to close. More than 500 flights were canceled.

The airport was able to resume “partial operations” Monday morning, BBC News reported. But schools were closed, government work paused and the Philippines stock exchange canceled trading for the day.

In the villages, meanwhile, the ashfall threatened homes and livelihoods.

“My father is missing,” evacuee Irene de Claro, whose father stayed behind when the rest of the family fled a village in Batangas, told The Associated Press. “We don’t know too what happened to our house because the ash was up to our knees, it was very dark and the ground was constantly shaking when we left. Most likely there’s nothing for us to return to. We’re back to zero.”

Fear of losing farms or livestock means some people are refusing to evacuate.

“We have a problem, our people are panicking due to the volcano because they want to save their livelihood, their pigs and herds of cows,” Mayor Wilson Maralit of Balete town told DZMM radio, as The Associated Press reported. “We’re trying to stop them from returning and warning that the volcano can explode again anytime and hit them.”

So far, there have been no deaths or injuries reported.

Taal volcano has erupted more than 30 times in 500 years, according to BBC News. The last time was in 1977.

Because it lies on the Pacific “Ring of Fire,” the Philippines is often threatened by earthquakes and volcanic eruptions. It also weathers around 20 typhoons or major storms every year, according to The Associated Press. The last was less than a month ago, when Typhoon Phanfone struck the predominantly Catholic country on Christmas Day.