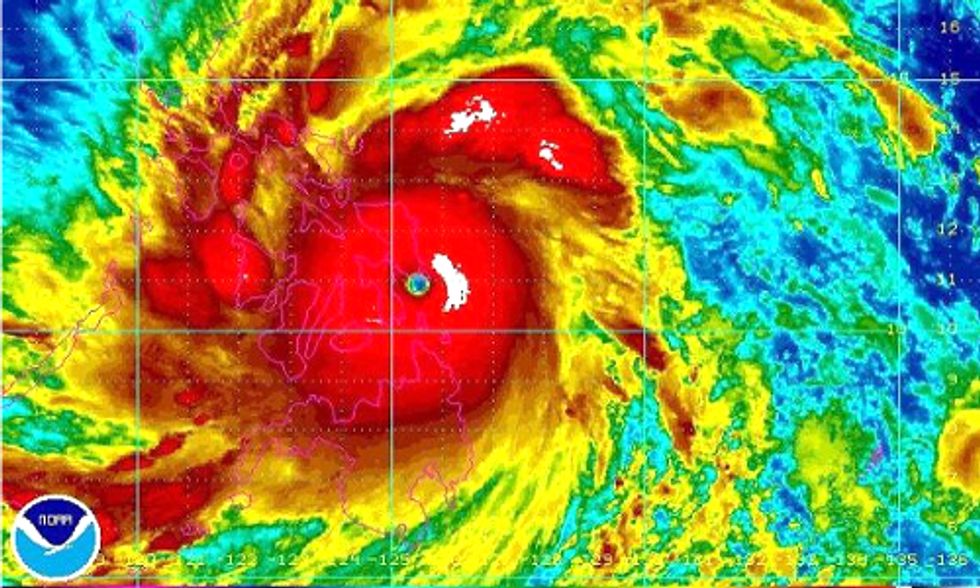 Diplomats, negotiators and civil society representatives from around the world held their breath this afternoon at the United Nations Climate Talks in Warsaw, Poland, this afternoon as Yeb Sano, the lead negotiator for the Philippines, began to address the opening of the conference.

More than 10,000 people are feared dead in the aftermath of Typhoon Haiyan, which slammed into the Philippines this weekend, causing apocalyptic devastation across a number of islands.

While scientists are careful not to connect any single weather event to climate change, it’s clear that global warming is loading the dice for devastating events like Typhoon Haiyan. Rising seas, warmer waters and a warmer and wetter atmosphere, all contribute to supercharge storms like Haiyan and Hurricane Sandy. Scientists have warned that extreme weather events will only increase in intensity and frequency if climate change is left unchecked.

Addressing the UN Climate Talks on behalf of the Philippines, Sano didn’t hesitate to connect Typhoon Haiyan to climate change and the fossil fuel industry’s role in fueling the crisis.

He began by thanking the global community, and especially young people, for the support and solidarity that they have shown the people of the Philippines.

“I thank the youth present here and the billions of young people around the world who stand steadfast behind my delegation and who are watching us shape their future,” said Sano. “I thank civil society, both who are working on the ground as we race against time in the hardest hit areas, and those who are here in Warsaw prodding us to have a sense of urgency and ambition.

"We are deeply moved by this manifestation of human solidarity," Sano continued. "This outpouring of support proves to us that as a human race, we can unite; that as a species, we care.”

Sano spoke of the terrifying devastation that Typhoon Haiyan has wrecked upon the Philippines, before connecting the dots directly to the climate crisis.

Yeb Sano, the lead negotiator for the Philippines at the COP 19 Climate Talks and has pledged a hunger strike in solidarity with victims of Typhoon Haiyan.

“To anyone who continues to deny the reality that is climate change, I dare you to get off your ivory tower and away from the comfort of you armchair,” he said. “I dare you to go to the islands of the Pacific, the islands of the Caribbean and the islands of the Indian ocean and see the impacts of rising sea levels; to the mountainous regions of the Himalayas and the Andes to see communities confronting glacial floods, to the Arctic where communities grapple with the fast dwindling polar ice caps, to the large deltas of the Mekong, the Ganges, the Amazon and the Nile where lives and livelihoods are drowned, to the hills of Central America that confronts similar monstrous hurricanes, to the vast savannas of Africa where climate change has likewise become a matter of life and death as food and water becomes scarce."

"Not to forget the massive hurricanes in the Gulf of Mexico and the eastern seaboard of North America," Sano continued. "And if that is not enough, you may want to pay a visit to the Philippines right now. What my country is going through as a result of this extreme climate event is madness. The climate crisis is madness.”

Sano said that he identified with the young people and activists around the world who are standing up to the fossil fuel industry, protesting in the streets and committing civil disobedience. He shared their frustration and appreciated their courageous action. The same sort of leadership was necessary here in Warsaw, he said.

“We can take drastic action now to ensure that we prevent a future where super typhoons are a way of life,” said Sano. “Because we refuse, as a nation, to accept a future where super typhoons like Haiyan become a fact of life. We refuse to accept that running away from storms, evacuating our families, suffering the devastation and misery, having to count our dead, become a way of life. We simply refuse to."

Sano then went off the prepared script of his remarks that were released to the media to announce that he would be commencing a voluntary fast.

The Philippines has become a voice for the billions of people around the world who are already feeling the impacts of climate change.

“In solidarity with my countrymen who are struggling to find food back home and with my brother who has not had food for the last three days, in all due respect Mr. President, and I mean no disrespect for your kind hospitality, I will now commence a voluntary fasting for the climate. This means I will voluntarily refrain from eating food during this COP until a meaningful outcome is in sight."

“We call on this COP to pursue work until the most meaningful outcome is in sight,” Sano said further. “Until concrete pledges have been made to ensure mobilization of resources for the Green Climate Fund. Until the promise of the establishment of a loss and damage mechanism has been fulfilled; until there is assurance on finance for adaptation; until concrete pathways for reaching the committed 100 billion dollars have been made; until we see real ambition on stabilizing greenhouse gas concentrations. We must put the money where our mouths are.”

“Let Poland, let Warsaw, be remembered as the place where we truly cared to stop this madness," Sano concluded. "Can humanity rise to this occasion? Mr. President, I still believe we can.”

At the end of his speech, the entire room here at the negotiations rose to their feet in a standing ovation. As the applause continued for minute after minute, a chant started up up in the back of the room, “We stand with you! We stand with you!”

The Philippines, and Yeb Sano have become a voice for the billions of people around the world who are already feeling the impacts of climate change.and are worried about their and their children’s future. Let’s hope that not only the public, but our politicians, can find the courage to stand with him and all of those pushing for action here at the talks in Warsaw.