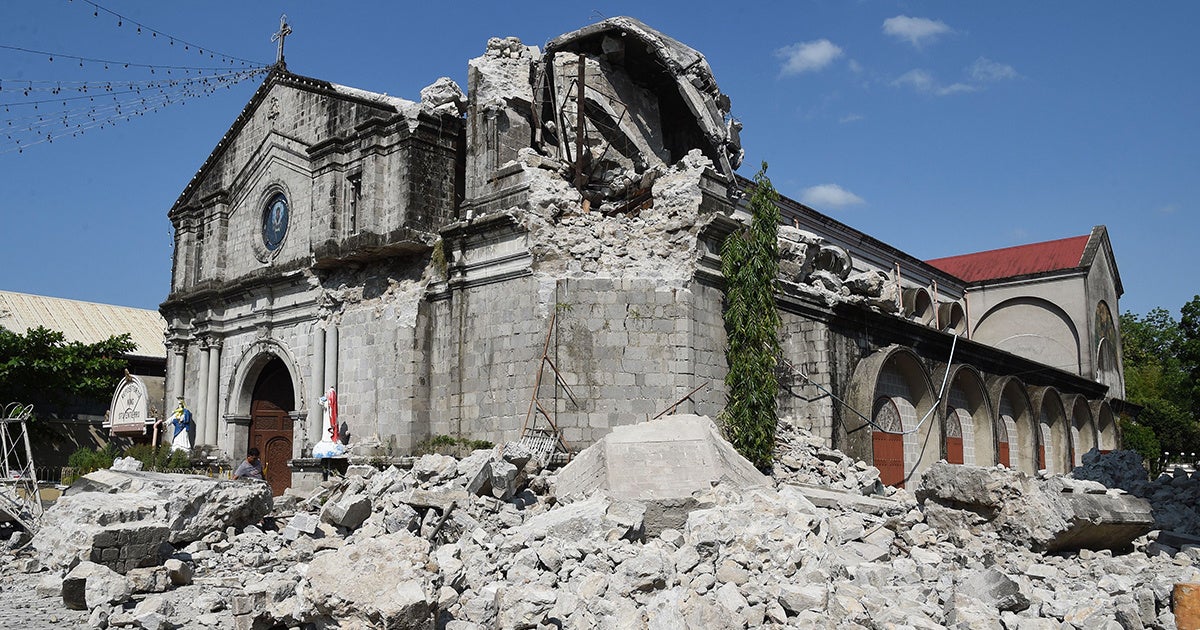 The 18th century St. Catherine of Alexandria church is seen after its bell tower was destroyed following a 6.3 magnitude earthquake that struck the town of Porac, pampanga province on April 23. TED ALJIBE / AFP / Getty Images

At least 16 people have died, 81 are injured and 14 are still missing after an earthquake struck Luzon island in the Philippines Monday, according to the latest figures from the National Disaster Risk Reduction and Management Council, as the Philippine Star tweeted Tuesday.

The 6.1 magnitude quake caused a supermarket to collapse in Porac, Pampanga province on the country’s largest island, trapping people inside, Reuters reported.

“We’re not sure how many people are trapped still,” Porac Mayor Condralito Dela Cruz told television news channel ANC, as Reuters reported. “We can still hear some voices, the voice of a woman.”

The Philippine Star said the death toll would likely rise as rescue crews continue to search the rubble of the Chuzon Supermarket. A state of calamity was declared in Porac to allow it to access funds faster, The Associated Press reported.

Rescuers ushered a survivor out of the rubble of wrecked Chuzon Supermarket in Porac, Pampanga on Tuesday. | via Jaime Laude (Video courtesy of Army and BFP Rescuers) pic.twitter.com/exWs6kIH3o

The earthquake occurred at 5 p.m. local time, and Dela Cruz said it was the strongest the town had experienced. Sixty-five-year-old resident Aurelia Daeng, who lost a wall of her home to the quake, agreed.

“It was very strong. It was our first time experiencing something like that,” she said, as Reuters reported.

The earthquake also damaged the Clarke International Airport in Pampanga, injuring seven people when part of the ceiling over the check-in area collapsed, CNN reported. The airport has suspended operations for 24 hours.

The governor of Pampanga, where most of the deaths took place, said she would investigate why certain buildings collapsed and others did not, Reuters reported.

The quake was also felt in the capital of Manila, about 68 miles to the south, where office workers fled swaying high rise buildings. A video showed water flying out of a penthouse swimming pool, according to CNN.

Monday’s quake was followed by another, stronger earthquake in San Julian town in Eastern Samar province, The Associated Press reported. That earthquake registered a 6.4 on the Richter scale, according to the U.S. Geological Survey. It sent people fleeing from homes and offices, but no casualties were reported. There was no serious damage, but cracks were reported on roads, buildings and a church in San Julian.

The quake Tuesday, which struck the island of Samar, prompted fears of a tsunami from some in the Philippines. But the Philippine Institute of Volcanology and Seismology said it posed no tsunami risk.

Netizen Zhaun Rosales Ortega said people are running out of fear of tsunami in Tacloban City on Tuesday.

Phivolcs said there is NO TSUNAMI THREAT from the Eastern Samar quake. (Video courtesy of Zhaun Rosales Ortega) pic.twitter.com/AUf6eE2ks0

The Philippines suffers from an elevated number of natural disasters because it is located on the seismically active “Ring of Fire” that surrounds the Pacific Ocean.