Gina Lopez, Who Led Anti-Mining Crackdown in Philippines, Dies at 65 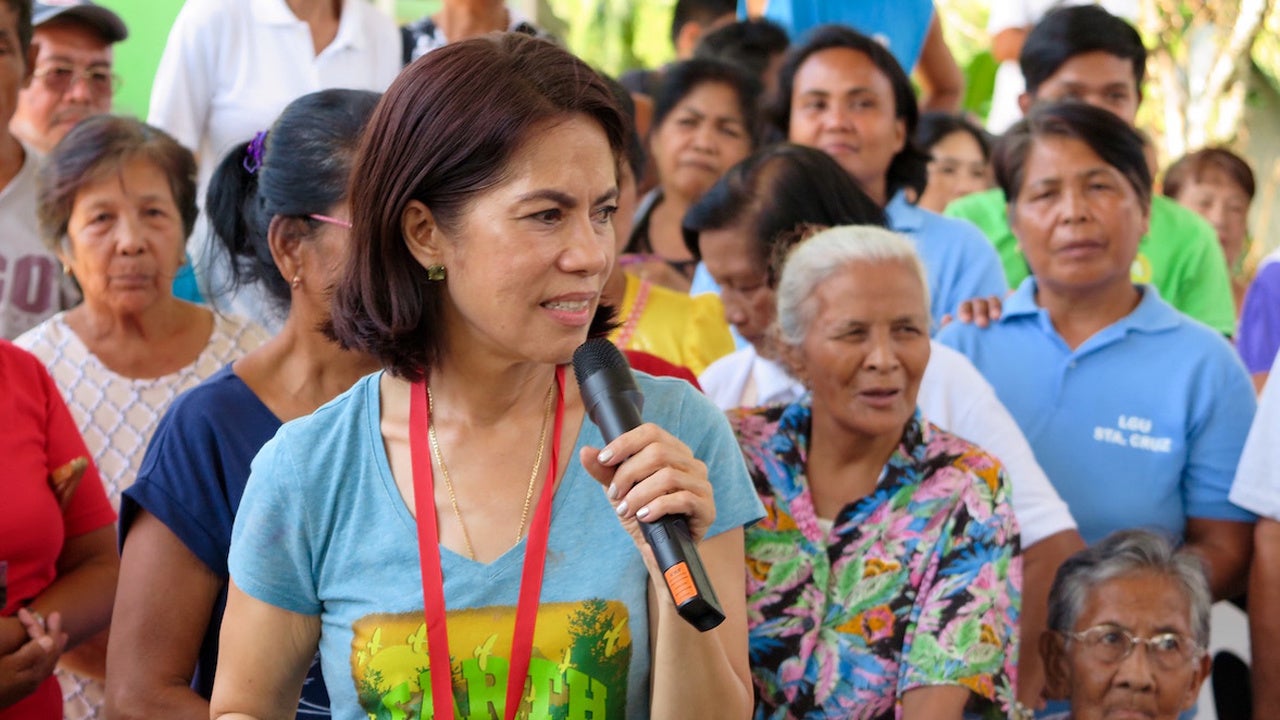 Gina Lopez, the Philippine secretary of the environment, at a meeting with residents affected by a mine tailing disaster. Keith Schneider

Gina Lopez, a former Philippine environment secretary, philanthropist and eco-warrior, died on Aug. 19 from brain cancer. She was 65.

Lopez was best known for fighting against destructive mining practices in her country, a crusade that spanned roles in both the private and public sector. In 2010, she joined forces with the Palawan NGO Network Inc. (PNNI) to establish the Save Palawan Movement, a coalition of grassroots civil society organizations that pushed for a total mining ban on the island of Palawan, home to an underground river and cave system that’s a UNESCO World Heritage Site. She initiated an anti-mining petition that garnered a landmark 10 million signatures, and by 2012, then-President Benigno Aquino Jr. issued an executive order banning new mining permits.

“Because of her, Palawan became the baseline of civil societies in other areas on the grassroots level,” said Elizabeth Maclang, the former PNNI advocacy officer and now park superintendent of the Puerto Princesa Underground River. “She strengthen[ed] our civil society groups here.”

President Rodrigo Duterte appointed Lopez as his cabinet secretary for the environment and natural resources in June 2016. Once in office, she led a massive audit of all mining operations in the country, cancelled the approval of 75 proposed mines in watershed areas, ordered the closure of 26 mines for environment violations, and suspended five other contracts.

But her tenure was short-lived; less than a year later, in May 2017, the congressional Commission on Appointments overturned her appointment, amid issues over her controversial policies and alleged incompetence, CNN Philippines reported at the time.

Regina “Gina” Lopez was born Dec. 27, 1953, into the prominent Lopez family behind ABS-CBN, the Philippines biggest media conglomerate. The family also has holdings in natural gas. Lopez was a longtime chair of the ABS-CBN Foundation Inc. (AFI), where she established a helpline to rescue abused children, an initiative that won the United Nations Grand Award for Excellence in 1997. Under her leadership, the foundation also supported the rehabilitation of the La Mesa watershed and the Pasig River, as well as provided financial assistance and training to rural communities in developing ecotourism initiatives.

“She thinks that if you want to discourage communities from allowing mining into their areas, you have to give locals an alternative,” Maclang said. “To make sure that mining corporations could not enter areas in Palawan, she strengthened communities and pushed for ecotourism.”

Maclang said it was also Lopez’s influence that encouraged communities to file cases against mining violations:

“Although she’s very vocal and she ends up with a lot of enemies, her passion is inspiring. We, on the ground, were infected by her courage. Like her, we persevere, we fight … it helped us knowing that she has our backs.”

In a statement, Yeb Saño of Greenpeace Philippines hailed Lopez as a “prime mover” in many environmental coalitions, particularly the Green Thumb Coalition, composed of more than 40 national and local organizations demanding government accountability on environment issues.

“Under her leadership, the Department of Environment and Natural Resources championed people over profit, putting the welfare of the Filipino people over the exploitation and destruction of natural resources by corporate interests,” Saño said in the statement. “She was also an inspiration to many for her courage and kindness.”