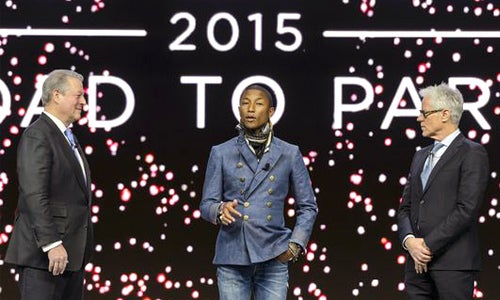 Hoping to rival the attention earned by 1985’s Live Aid concerts, environmental awareness concerts Live Earth took place in 11 locations in July 2007. But the second, scheduled for Mumbai, Indian, in December 2008, was cancelled after the November terrorist attacks on the city, and the idea was never revived.

Speaking at the World Economic Conference in Davos, Switzerland Wednesday, the trio said that Live Earth 2015 will happen on all seven continents including Antarctica, with the European concert taking place in Paris. Together, they will feature more than 100 performers. No acts were named, but the organizers said they have already signed up 102 broadcast networks to carry the event. Williams, who performed at Live Earth in Rio de Janiero in 2007, will be music director.

“Instead of just having people perform, we literally are going to have humanity harmonize all at once,” said Williams.

Recalling  the 2007 event he said, “You would have pundits and comedians who didn’t understand global warming and we were often ridiculed. We wanted to do something very different this time.”

Having Williams on board gives the event some real star power. Since the early ’90s, he’s been half of the massively successful production duo the Neptunes, who have worked with artists such as Britney Spears, Beyonce and Gwen Stefani. Williams himself was the force behind three on 2013’s biggest international hits, Daft Punk’s “Get Lucky,” Robin Thicke’s “Blurred Lines” and his own worldwide #1 hit “Happy.” In the past year, he produced singles for Stefani, Ed Sheeran, Alicia Keys and Usher, among others, so he’s well-connected to bring big names on board.

Williams’ engagement with environmental issues isn’t something new. As part of 2007’s Live Earth event, Williams collaborated with Madonna on a single “Hey You,” with 25 cents from each download donated to the Global Alliance for Climate Change. Last summer, he debuted his G-Star Raw for the Oceans clothing collection, crafted of denim made from recycled plastics retrieved from the ocean.

“The power of music is unique, because it’s borderless, without language,” said Wall. “Pharrell will use that power. When you combine music with a message, you can effect change.”