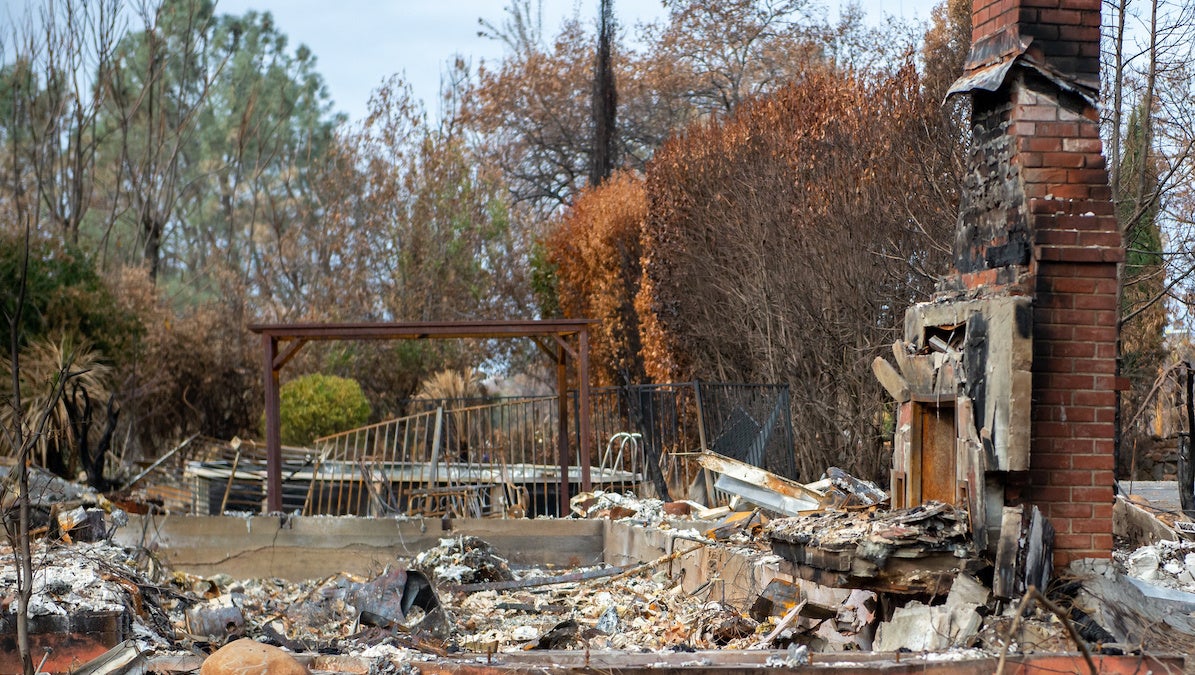 Remnants of a home in Paradise, California on Dec. 18, 2018, after the November Camp Fire. Cal OES

A faulty transmission line from California’s largest utility PG&E started the Camp Fire in 2018 that ripped through California and destroyed the town of Paradise. For that, the company’s CEO Bill Johnson had to stand in front of a judge on Tuesday and say the word “guilty” as 85 counts were read out: 84 for involuntary manslaughter, and one for unlawfully starting a fire, according to The New York Times.

“I’m here today on behalf of the 23,000 men and women of PG&E to take responsibility for the fire that killed these people,” Johnson told Judge Michael R. Deems of Butte County Superior Court, while families of the victims watched live on YouTube, as The New York Times reported. “No words from me can ever reduce the magnitude of that devastation.”

As NPR reported, Johnson stood with his hands clasped and gently rocked back and forth for duration of the 28 minutes that the judge read out the names of the dead, and Johnson said, “Guilty your honor,” after each one.

“Our equipment started that fire,” Johnson admitted, after waiving the company’s right to appeal the case, according to NPR.

“I wish there was some way to take back what happened, or to take away the impact, the pain that these people have suffered,” Johnson said, according to NBC News. “But I know that can’t be done.”

The guilty plea followed a scathing report presented to a grand jury that was released Tuesday. The report found that the utility giant willfully ignored warnings about its aging power lines and shoddy maintenance repeatedly. It also did not follow state regulations. The report said the company showed “a callous disregard” for life and property, according to court documents, as NPR reported.

That led to the fire that ignited on Nov. 8, 2018. It directly killed 84 people, leveled the town of Paradise, and wiped out large parts of the nearby towns Concow, Magalia and other areas of Butte county, according to NBC News.

For its misdeeds that led to the deadliest and most destructive wildfire in California history that claimed more than 18,800 structures, including 13,696 single-family homes and 528 businesses, the company will have to pay .5 million. It will also have to pay 0,000 for the cost of the investigation, as NBC News reported.

Butte County District Attorney Michael Ramsey, who was dismayed that the penalty for 84 counts of manslaughter included no jail time and a relatively light fine, spearheaded the investigation. No company employees or executives are expected to face prison time.

“This is the first time that PG&E, or any major utility, has been charged with homicide as result of a reckless fire,” Ramsey noted in a press conference following the string of guilty pleas.

“We treat corporations as persons but we don’t send corporations to jail,” Ramsey added, as NPR reported. “The best the state could do is to fine the company as a person. There’s an obvious disconnect there.”

He noted that the state’s hands were tied since they were only allowed to ask for ,000 per death.

A criminal conviction might undo some companies, like it did to consulting firm Arthur Andersen after it was found guilty in 2002 of obstructing justice. However, PG&E is a state monopoly, leaving customers with no other place to turn for their electricity needs, according to The New York Times.

“They have put profits over people year after year and the state of California just keeps letting it happen,” said Tommy Wehe, who lost his mother when she was burned by the fire while trying to flee in her truck, according to The New York Times. “The company’s acceptance of guilt is inconsequential if the appropriate safety measures are not enacted to prevent the future loss of life and property.”