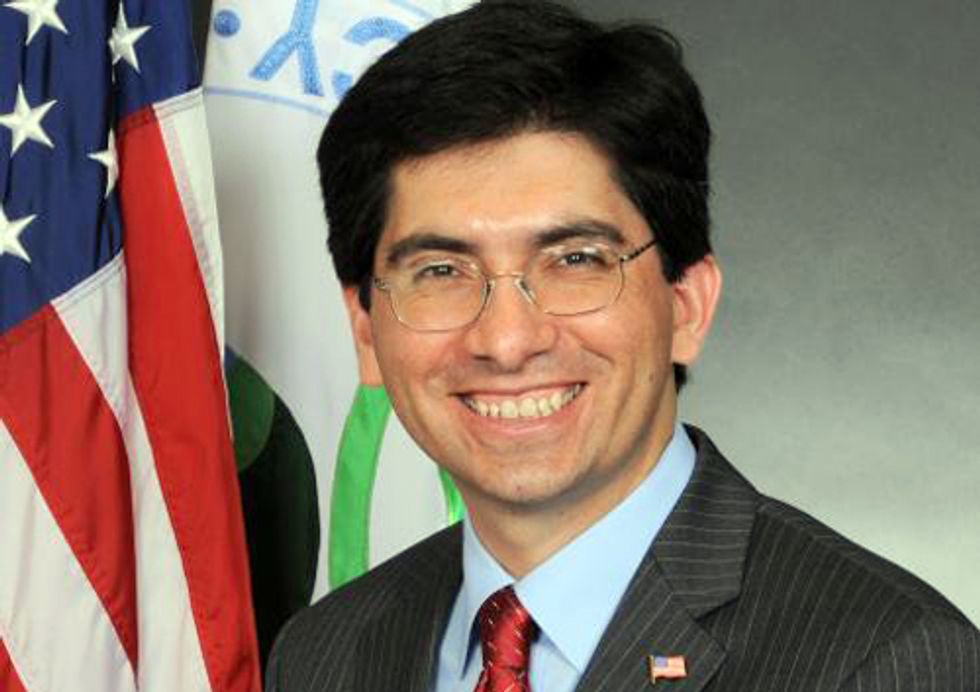 Last week, the world got a preview of America’s new post Citizens United petro plutocracy with the oil lords flexing their political muscles like oil soaked body builders pumped up on a steroid drip of campaign dollars. It was all about fracking. The petro tycoons first orchestrated the firing of U.S. Environmental Protection Agency's (EPA) top frac patch enforcer, then adeptly forced the same cowed agency to stall its release of a damaging scientific study on fracking and finally strong armed the Interior Department to open America’s public lands to gas companies without prior disclosure of their frac chemicals.

On Monday, the oil industry showcased its political muscle by forcing the resignation of EPA’s popular environmental enforcement chief for the Gulf region, Dr. Al Armendariz. Dr. Al was beloved by environmentalists, civic leaders, and poor and minority communities across five states for his willingness to strictly enforce environmental rules regardless of the lawbreakers’ political clout. But Armendariz’s courage won him powerful enemies as well. He was steadfastly undeterred by relentless pressure from polluters and their allies including political intrigue, hamstringing budget cuts, and even death threats directed at him and his family. But this week, the world’s most powerful cartel—an international syndicate feared even by the Obama Administration—finally brought Dr. Armendariz down. Armendariz’s mistake was promising to enforce the law against Big Oil in the shale gas fields.

Several weeks ago, a two-year-old videotape surfaced showing Dr. Armendariz addressing a group of frightened and skeptical businessmen, civil leaders and property owners in Dish, Texas, a gas patch town familiar with government’s anemic enforcement record against the oil barons.  Dish’s citizenry were terrified that reckless, dangerous and illegal practices by shale-gas fracking companies might jeopardize their community’s property values, water supplies, jobs, local businesses and human health. Dish’s Mayor, Calvin Tillman, who attended the meeting, had already moved his home away from the frac fields due to the daily nosebleeds afflicting his children ever since fracking operations commenced. Armenderiz assured Dish’s shaken citizens that the EPA would enforce the law strictly in order to quickly bring industry outlaws into line.  This was too much for Congress’ “law and order” Republicans who apparently believe that oil companies, and shale fracking in particular, should be above the law. Lead by U.S. Senator, James Inhofe (R-Okla.), Big Petroleum’s sock-puppet-in-chief, Congressional Republicans forced Armenderiz’s dismissal. (As a private citizen, Dr. Al is no longer entitled to FBI protection and has had to appeal to the Dallas police for protection against continuing assassination threats.) Instead of the deterrence, for which Dr. Al had hoped, the episode sent an altogether different public message—government enforcers can lose their jobs by suggesting that the oil companies ought to obey America’s laws.

The republicans complained that Armenderiz, by way of reassuring Dish’s frightened and skeptical townsfolk, referenced, as a metaphor, the ancient Roman practices of roadside crucifixion and burning villages to deter violators. Attorneys are familiar with such historical touchstones that are routinely invoked by law professors and “tough on crime” prosecutors to illustrate the concept of deterrence. If Armedariz had been speaking about any other crime than pollution from fracking, and any type of criminal other than oil frackers, the same republican lawmakers would have applauded his muscular commitment to merciless rigor.

From its inception, hydrofracking has been an outlaw enterprise. The industry was born in a provision drafted in secret by oilman Dick Cheney’s clandestine energy task force specifically exempting it from the Safe Drinking Water Act, a shale fracking method devised and patented by Cheney’s former company Halliburton. The Vice President’s henchman then rammed the exemption though a supplicant post 9/11 Congress. Rough and tumble competition among fracking companies have turned the frac fields from North Dakota to Pennsylvania into modern Dodge Cities. Regulatory capture has given the industry’s worst actors de facto immunity from their criminal behavior. In states like Pennsylvania and West Virginia, the fracking industry has become an outlaw enterprise, flourishing through habitual law breaking including illegal dumping of horrendous toxins into public sewage treatment plants utterly unequipped to treat those poisons, using substandard casing protocols that regularly contaminate people’s groundwater with carcinogenic benzene and explosive methane, and illegally filling streams to build roads, pipelines and drill pads. These species of habitual lawbreakers require the protection of crooked politicians and captive agencies to insulate criminal companies from the consequences of their illegal behavior. Oil companies are experts at using campaign contributions to purchase this class of government cooperation.

In another demonstration of its impressive power, two days after Dr. Al’s resignation, the frac industry won another political battle—forcing cowed Interior Department officials to allow gas companies to frac on our federal public lands without first disclosing the constituents of the lethal fracking fluid they intend to inject into our purple mountains’ majesty and amber waves of grain.

Later that week, A.P. reporters documented how the frac industry was using its clout to escape, not just the laws of government, but of science. On Thursday, AP’s investigators forced the U.S. EPA to admit that it had withheld—for nearly a month—a devastating study showing groundwater contamination linked to fracking from oil and gas wells in Pavillion, Wyoming. At the command of Wyoming’s republican Governor Matt Mead—an indentured servant to the fracking industry—the EPA delayed issuing the report. Mead then ordered state officials to “take a hard line” on the industry’s behalf. A team of tobacco scientists and biostitutes at Wyoming’s Department of Environmental Quality next dutifully used the delay to gin up critical questions meant to debunk EPA’s science to help soften the blow from the federal study that sent shock waves through the oil and gas industry.

Law-abiding gas patch residents like the citizens of Dish, Texas understand something that Congressional Republicans apparently don’t—environmental crime is real crime with real victims. Pollution doesn’t just attack water and wildlife and put fishermen out of work. It harms human health, private property and often takes human life. Oil pollution damages the brains of little children and kills both young people and adults. Emissions from burning oil and coal kills tens of thousands Americans annually from cancer and respiratory illnesses, and impose hundreds of billions of dollars yearly in health care damage. Oil and coal’s other costs include global warming, acid rain, mercury contamination and ocean acidification. The carbon cronies have demonstrated an uncanny talent for writing loopholes and exemptions into health, safety and environmental laws to escape the consequences of damaging private property, public health, the shared commons and the welfare of the American people. When their lobbying and drafting tricks fail to give oil titans full protection, compliant enforcement and regulatory officials dull the sting of noncompliance. It’s no wonder that frightened gas field communities seek assurance that government regulators will enforce the anemic laws that still exist to protect them. In the southern Gulf states, Armendariz was respected by coastal communities as one of the few public officials who had not been corrupted by Big Oil. In that sense, Armendariz is an American hero in the mould of Eliott Ness, Pat Garret, Wyatt Earp and Thomas Dewey.

Unfortunately, most of our political leaders lack Dr. Al’s courage and integrity. Instead of protecting America’s citizenry from oil industry atrocities, Senator Inhofe and the republicans see their job as protecting oil company brigands from the law and its enforcers. Inhofe’s reasoning is not obscure, the oil and gas industry pumps hundreds of millions of dollars annually into elections and lobbying to purchase friends like Senator Inhofe. Big Oil is now the richest industry in history. Last year, Exxon contributed $54 million to the political process. The gravities of this lucre are irresistible to politicians of a certain stripe. Exxon’s record quarterly profits of $145 million per day will allow that company to dramatically increase its political investments. More importantly, the Supreme Court’s Citizens United case removes all the past restrictions that once deterred Big Oil from employing these enormous profits to completely dominate America’s political system. As a result of that court ruling, the oil barons will pick the winners and losers in America’s upcoming elections at every level—in secret if they desire.

The industry is already poised to flood America’s political landscapes with hundreds of millions of dollars in newly legalized bribery. In addition to their generous contribution to the Tea Party, CATO Institute and other oil industry front groups, and oil tycoons Charles and David Koch, on Feb. 3 pledged an extra $60 million of their private money for direct campaign donations to ensure that their oil friendly candidate wins the presidential election in November.

Chevron, Exxon, the American Petroleum Institute and other oil moguls will match the Koch brothers’ largesse many times over. The oil barons must find great comfort in historic data assembled by the Center for Responsive Politics demonstrating that, in 94% of American elections, the candidate with the most money wins.

It was the underlying idealism of our successful experiment with self-government that made America an exemplary nation and the template for the world’s democracies. If American democracy is to survive, we clearly need to restore integrity and representative democracy to our electoral process and get control of an industry that is using its enormous financial power to enrich itself, destroy the planet and undermine everything we value. Last week’s events are merely a foreshadowing of the devolution that is inexorably propelling us toward a corrupt venal and petro kleptocracy.