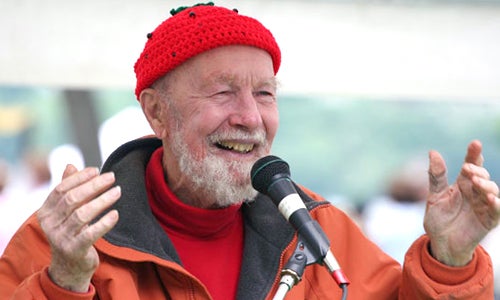 “This machine surrounds hate and forces it to surrender.”  —Words painted on Pete Seeger’s banjo

A man with a banjo can be a powerful force for good. Pete Seeger, who died Jan. 27 at the age of 94, inspired generations of political and environmental activists with songs ranging from “Where Have All the Flowers Gone?” to “Sailing Down My Golden River.”

From the late 1930s until his death, Seeger brought his music to union halls, churches, schools, migrant camps, nightclubs, TV studios, marches and rallies—always inviting audiences to join in. His calling took him from being hauled before the House Un-American Activities Committee in 1955 to being invited to perform at President Barack Obama’s inauguration in 2009.

Like me, he was inspired by Rachel Carson’s 1962 book Silent Spring to become a strong defender of the environment as well as human rights. In both social justice and environmental causes, he believed in the strength of grassroots efforts. As he told the CBC Radio program Ideas, “The powers that be can break up any big thing they want. They can attack it from the outside. They can infiltrate it and corrupt it from the inside—or co-opt it. But what are they going to do about 10 million little things? They don’t know where to start. Break up three of them and four more like it start up.”

Seeger and his wife, Toshi, devoted a lot of time to protecting the Hudson River near their home in Beacon, NY. To save the polluted waterway, they raised money to build a sloop, the Clearwater, to take children, teachers and parents sailing. The boat and cleanup efforts have since spawned a science-based environmental education organization and music festival—and led to progress in restoring the river and ridding it of toxic PCBs, pesticides and other chemicals.

Seeger was also involved in anti-fracking efforts, adding the line, “This land was made to be frack-free” to his late friend Woody Guthrie’s anthem, “This Land Is Your Land,” when he joined Willie Nelson, Neil Young, John Mellencamp and Dave Matthews at a Farm Aid benefit last year.

Like all of us who devote our lives to trying to make the world better, Seeger made mistakes along the way. But he was willing to admit when he was wrong and to change his views.

As a geneticist, I’m fascinated by the built-in need we have for music; it reaches deep within us. The power of a good song to touch us emotionally and rally us to action is nothing short of extraordinary.

And musicians are often the first to donate their time and music to worthy causes. It’s why I’ve had such deep admiration for musicians I’ve worked with and often been lucky enough to call my friends, from Bruce Cockburn and Gordon Lightfoot to Neil Young and Sarah Harmer and the members of Blue Rodeo. Musicians have inspired millions of people with powerful anthems, from Seeger’s rendition of “We Shall Overcome” to John Lennon’s “Imagine.” In recognition of the power of song, the David Suzuki Foundation invited musicians from across the country to contribute to a recording called Playlist for the Planet in 2011.

I recently had the pleasure of joining Neil Young and Diana Krall on their Honour the Treaties tour to raise money and awareness for the Athabasca Chipewyan First Nation’s legal battle to protect their traditional lands and rights guaranteed under Treaty 8. As “just a musician,” Young was criticized for having the nerve to speak out and for his harsh words about rampant tar sands development. But, as much as it would be better if the media, public and government paid far more attention to First Nations and their spokespeople, a celebrity with conviction and the ability to communicate through the powerful medium of song—or other forms of artistic expression—can often highlight a struggle in ways few others can.

Like Nelson Mandela, who died in December at age 95, Pete Seeger was a great communicator for whom principles mattered more than anything else. He was a true American and world citizen and we’re better off for the contributions he made during his long life.