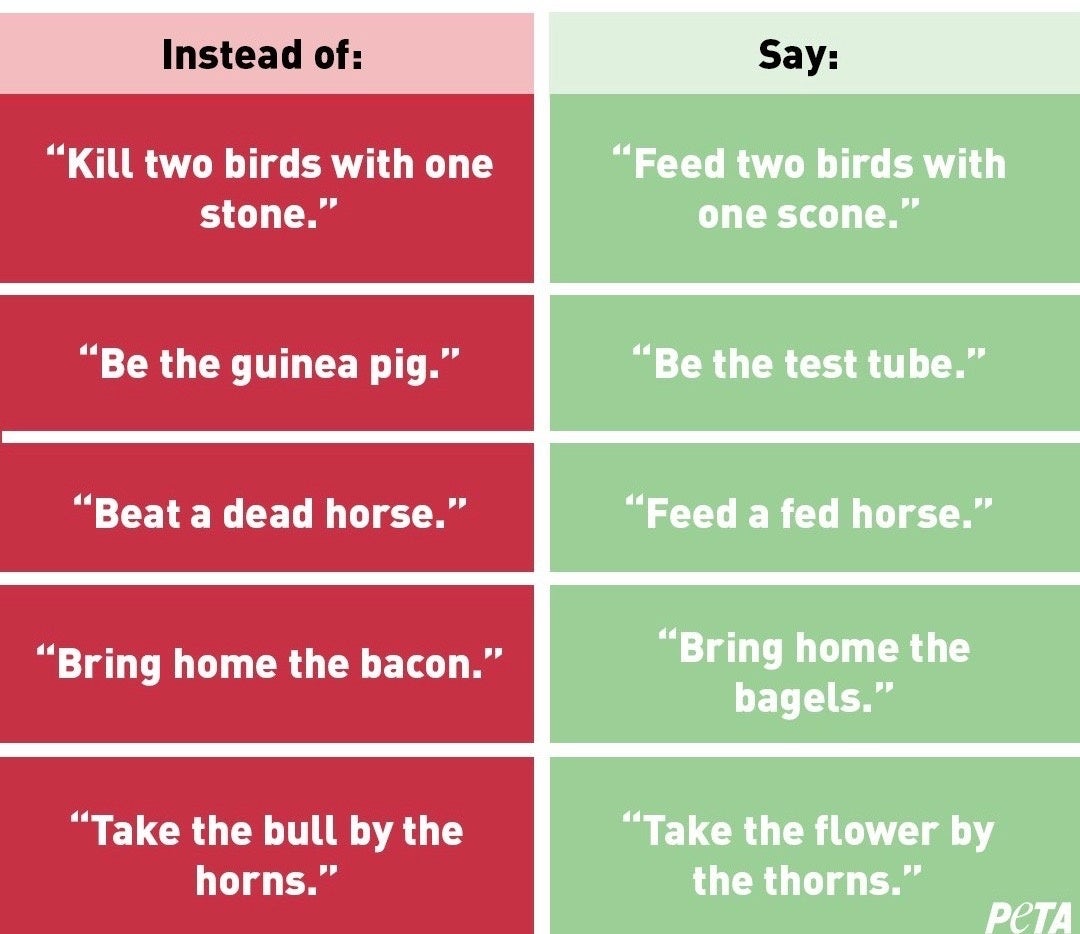 Instead of bacon, People for the Ethical Treatment of Animals (PETA) wants us to “bring home the bagels.” Instead of “killing two birds with one stone,” why not feed them a scone?

In a tweet on Tuesday, the
animal rights group called out the “speciesism” of our everyday conversations in order to encourage compassion for animals. They also included an infographic of their suggested alternatives.

Words matter, and as our understanding of social justice evolves, our language evolves along with it. Here’s how to remove speciesism from your daily conversations. pic.twitter.com/o67EbBA7H4

PETA suggests that such idioms should be phased out just like how it has become “unacceptable to use racist, homophobic, or ableist language.”

The comments immediately made headlines, with some people criticizing the organization for equating common sayings with the struggles of marginalized communities.

@peta – This tweet is extremely ignorant. To compare “anti-animal language” to racism is blatantly irresponsible and shows a complete lack of understanding of how racist rhetoric has both disproportionately impacted entire communities and in many instances lead to death.

Journalist Monique Judge also wrote on The Root: “It is utterly and egregiously offensive to make the comparison you have made. Racist language is inextricably tied to racism, racial terrorism and racial violence. No matter how you try to twist it, it is not the same thing as using animals in a turn of phrase or enjoying a BLT.”

Other critics have said that PETA’s own suggested phrases are bad for animals. For instance, feeding scones to birds can harm them and feeding a horse that’s already fed would be overfeeding. Another person said that pulling a flower by its thorns kills the flower.

Why would feed a bird scones?
Couldn’t bring home the bagels be seen as anti-semetic?
Animals are sacred but plants don’t count?
If you feed a fed horse isn’t that over feeding and bad for the horse?

EcoWatch asked PETA for a comment on the varied responses to their tweet. A spokesperson emailed us back with a previously released statement:

Words matter, and as our understanding of social justice evolves, our language evolves along with it. Just as it became unacceptable to use racist, homophobic, or ableist language, phrases that trivialize cruelty to animals will vanish as more people begin to appreciate animals for who they are and start “bringing home the bagels” instead of the bacon.

With so much negativity in the world, why not lighten up, smile a little more, and use language in a way that encourages being kind to animals?