Pesticides Threaten Aquatic Species in the Wildest Stream in the West 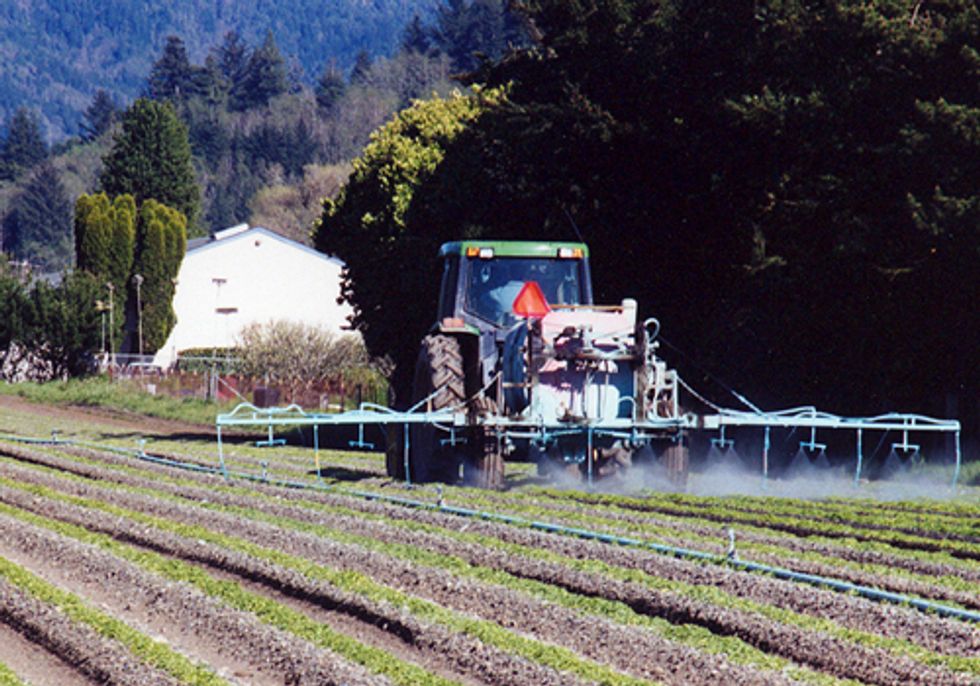 Travelers on the northern pitch of California find themselves ascending through the Klamath-Siskiyou Bioregion, one of the oldest, largest and wildest ecosystems in the U.S. outside of Alaska. The coastal gateway to this wildland is the Smith River, the only remaining undammed major river in California. The Smith is almost fully protected, a 719 square-mile paradise where salmon and steelhead of monumental size still reign in a state whose fishery flirts with extinction.

Incredibly, for the past half-century local farmers—who grow ninety percent of the U.S. production of Easter lily bulbs—have applied an annual average of 300,000 pounds of highly toxic pesticides on some 1,000 acres of lily fields that drain directly to the Smith River estuary. Estuaries provide critical habitat for salmonids—particularly endangered Coho salmon—and other species.

The non-profit Siskiyou Land Conservancy and its predecessor, the Smith River Project, have for the past dozen years dogged state and federal agencies to reign in lily farmers’ pesticide use, which, in the case of two “bad actor” chemicals, occurs in pounds-per-acre amounts that are higher than anywhere else in pesticide-soaked California. But challenging pesticide use in California, or anywhere in the U.S., is like searching a black hole for a place to sit down.

In the distance we see a bench. In 2011, the California North Coast Regional Water Quality Control Board issued a report revealing that a stream feeding the Smith River estuary’s only remaining large slough was contaminated with pesticide residues. The testing occurred only after a years-long squeaky-wheel campaign by Siskiyou Land Conservancy. While the sampling was tiny, the result has given proponents of clean water ammunition to protect what is arguably the most pristine salmonid stream on the West Coast of the U.S.

Water Quality scientists took just four samples in all, one above and one below pesticide use in two creeks. They got a huge hit. One of the samples revealed that copper levels in Delilah Creek were 28 times higher than that allowed by state law. The findings also “demonstrate evidence of chronic reproductive toxicity,” according to the report.

Copper is easier and cheaper to detect than most of the pesticides (and their breakdown products) used along the Smith River. The Water Board’s findings indicate that other pesticides may be reaching the Smith River estuary. Christopher Pincetich, Ph.D., an expert on the effects of pesticides on aquatic organisms, said of the state’s Smith River testing, “The chronic toxicity result is very significant; I saw almost zero reproduction. That test uses Ceriodaphnia dubia, a freshwater invertebrate, the ‘water flea.’ It is very relevant to use as it is the base of the food-web. If Cerio can not reproduce in your watershed, you can technically extrapolate this to say that salmon habitat is likely impaired as their food source (small aquatic invertebrates) is impacted.”

Public trust agencies are responding with concern. The Smith River—no dams, little sediment, almost entirely protected within the Smith River National Recreation Area, more miles designated “Wild and Scenic” than any other U.S. stream outside of Alaska—is a “seed bank” for wild salmonid stocks. In terms of species recovery, over decades “strays” from the Smith River may be responsible for recolonizing salmon and steelhead streams up and down the California-Oregon coast. That is, if the pesticides don’t get them first.

A 2002 study commissioned by the Smith River Project revealed that in 2000 lily growers applied more pounds per acre of metam sodium and 1,3-Dichloropropene—highly toxic and carcinogenic nematicides—than occurred in any other county in California. By 2008 use of both of these chemicals in Smith River had more than doubled. In addition, use of at least four pesticides along the Smith River estuary exceed the federal government’s established level of concern for endangered aquatic organisms.

Since January 2012, several significant developments promise to bolster protection efforts at the Smith River estuary, including:

Lily farming is one of the last viable local industries in Del Norte County, one of the poorest regions of California. Twenty-two percent of Del Norte County’s 30,000 residents live under the poverty level; the timber and fishing industries are all but dead; and the biggest employer is Pelican Bay State Prison, a lock-up so severe that even Amnesty International has condemned it.

Challenging lily farmers draws howls from local business boosters. When NMFS released the Coho Recovery Plan, all five of the county Board of Supervisors condemned the document.

“There’s a bullseye on ag,” Supervisor David Finigan told the Del Norte County Triplicate in a story that appeared on April 2.

Indeed, the Recovery Plan hammers ag throughout the Smith River chapter of the document. “The areas that have been impacted are in the lower Smith River, where the greatest potential to support coho exists. … Agriculture in the lower watershed and around the estuary has been, and continues to be the greatest contributor to loss and degradation of coho salmon habitat. … The production of lily flowers and bulbs requires pesticide use to control nematodes and diseases, which can impact salmonids.”

In the Triplicate article Harry Harms, general manager of Hastings Bulb Growers, Inc., said the Recovery Plan should not have cited a 2002 study conducted for the Smith River Project by the Center for Ethics and Toxics, then led by the renowned toxicologist Dr. Marc Lappé.

“It’s loaded with supposition and these guys are trying to basically use data that connects dots,” said Harms. “They’re saying since we use it, it must be there.”