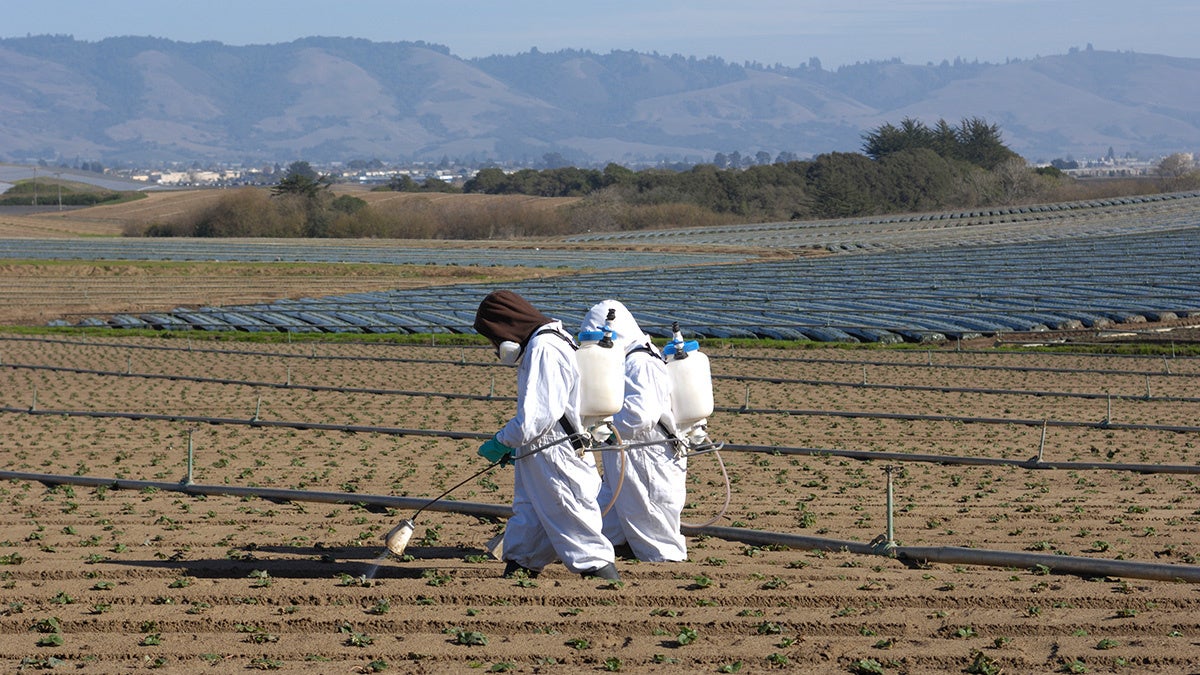 Last month the Food & Drug Administration published its latest annual analysis of the levels of pesticide residues that contaminate the fruits and veggies and other foods we Americans routinely put on our dinner plates. The fresh data adds to growing consumer concern and scientific debate over how pesticide residues in food may contribute – or not – to illness, disease and reproductive problems.

Over 55 pages of data, charts and graphs, the FDA’s “Pesticide Residue Monitoring Program” report also provides a rather unappetizing example of the degree to which U.S. farmers have come to rely on synthetic insecticides, fungicides and herbicides in growing our food.

We learn, for instance, in reading the latest report, that traces of pesticides were found in 84 percent of domestic samples of fruits, and 53 percent of vegetables, as well as 42 percent of grains and 73 percent of food samples simply listed as “other.” The samples were drawn from around the country, including from California, Texas, Kansas, New York and Wisconsin.

Roughly 94 percent of grapes, grape juice and raisins tested positive for pesticide residues as did 99 percent of strawberries, 88 percent of apples and apple juice, and 33 percent of rice products, according to the FDA data.

Imported fruits and vegetables actually showed a lower prevalence of pesticides, with 52 percent of fruits and 46 percent of vegetables from abroad testing positive for pesticides. Those samples came from more than 40 countries, including Mexico, China, India and Canada.

We also learn that for the most recently reported sampling, among the hundreds of different pesticides, the FDA found traces of the long-banned insecticide DDT in food samples, as well as chlorpyrifos, 2,4-D and glyphosate. DDT is linked to breast cancer, infertility and miscarriage, while chlorpyrifos – another insecticide – has been scientifically shown to cause neurodevelopmental problems in young children.

Chlorpyrifos is so dangerous that the European Food Safety Authority has recommended a ban of the chemical in Europe, finding that there is no safe exposure level. The herbicides 2,4-D and glyphosate are both linked to cancers and other health problems as well.

Thailand recently said it was banning glyphosate and chlorpyrifos due to the scientifically established risks of these pesticides.

Despite the prevalence of pesticides found in U.S. foods, the FDA, along with the U.S. Environmental Protection Agency (EPA) and the U.S. Department of Agriculture (USDA), assert that pesticide residues in food are really nothing to worry about. Amid heavy lobbying by the agrichemical industry the EPA has actually supported continued use of glyphosate and chlorpyrifos in food production.

The regulators echo the words of Monsanto executives and others in the chemical industry by insisting that pesticide residues pose no threat to human health as long as the levels of each type of residue falls under a “tolerance” level set by the EPA.

In the most recent FDA analysis, only 3.8 percent of domestic foods had residue levels that were considered illegally high, or “violative.” For imported foods, 10.4 percent of the foods sampled were violative, according to the FDA.

What the FDA did not say, and what regulatory agencies routinely avoid saying publicly, is that the tolerance levels for certain pesticides have risen over the years as the companies that sell the pesticides request higher and higher legal limits. The EPA has approved several increases allowed for glyphosate residues in food, for instance. As well, the agency often makes the determination that it need not comply with a legal requirement that states the EPA “shall apply an additional tenfold margin of safety for infants and children” in setting the legal levels for pesticide residues. The EPA has overridden that requirement in the setting of many pesticide tolerances, saying no such extra margin of safety is needed to protect children.

The bottom line: The higher the EPA sets the “tolerance” allowed as the legal limit, the lower the possibility that regulators will have to report “violative” residues in our food. As a result, the U.S. routinely allows higher levels of pesticide residues in food than other developed nations. For example, the legal limit for the weed killer glyphosate on an apple is 0.2 parts per million (ppm) in the U.S. but only half that level – 0.1 ppm – is allowed on an apple in the European Union. As well, the U.S. allows residues of glyphosate on corn at 5 ppm, while the EU allows only 1 ppm.

As legal limits rise for pesticide residues in food, many scientists have been increasingly raising alarms about the risks of regular consumption of the residues, and the lack of regulatory consideration of the potential cumulative impacts of consuming an array of bug and weed killers with every meal.

A team of Harvard scientists are calling for in-depth research about potential links between disease and consumption of pesticide as they estimate that more than 90 percent of people in the U.S. have pesticide residues in their urine and blood due to consumption of pesticide-laced foods. A study connected to Harvard found that dietary pesticide exposure within a “typical” range was associated both with problems women had getting pregnant and delivering live babies.

Additional studies have found other health problems tied to dietary exposures to pesticides, including to glyphosate. Glyphosate is the most widely used herbicide in the world and is the active ingredient in Monsanto’s branded Roundup and other weed killing products.

But as the concerns mount, agrichemical industry allies are pushing back. This month a group of three researchers with long-standing close ties to the companies that sell agricultural pesticides released a report seeking to soothe consumer worries and discount the scientific research.

The report, which was issued Oct. 21, stated that “there is no direct scientific or medical evidence indicating that typical exposure of consumers to pesticide residues poses any health risk. Pesticide residue data and exposure estimates typically demonstrate that food consumers are exposed to levels of pesticide residues that are several orders of magnitude below those of potential health concern.”

Not surprisingly, the three authors of the report are closely tied to the agrichemical industry. One of the report’s authors is Steve Savage, an agrichemical industry consultant and former DuPont employee. Another is Carol Burns, a former scientist for Dow Chemical and current consultant for Cortevia Agriscience, a spin-off of DowDuPont. The third author is Carl Winter, chair of the Department of Food Science and Technology at the University of California at Davis. The university has received approximately million a year from the agrichemical industry, according to a university researcher, though the accuracy of that figure has not been established.

The authors took their report directly to Congress, holding three different presentations in Washington, DC, designed to promote their message of pesticide safety for use in “media food safety stories, and consumer advice regarding which foods consumers should (or should not) consume.”

The pro-pesticide sessions were held at the office buildings for members of Congress and, appropriately it seems, at the headquarters for CropLife America, the lobbyist for the agrichemical industry.

Reposted with permission from our media associate U.S. Right to Know.