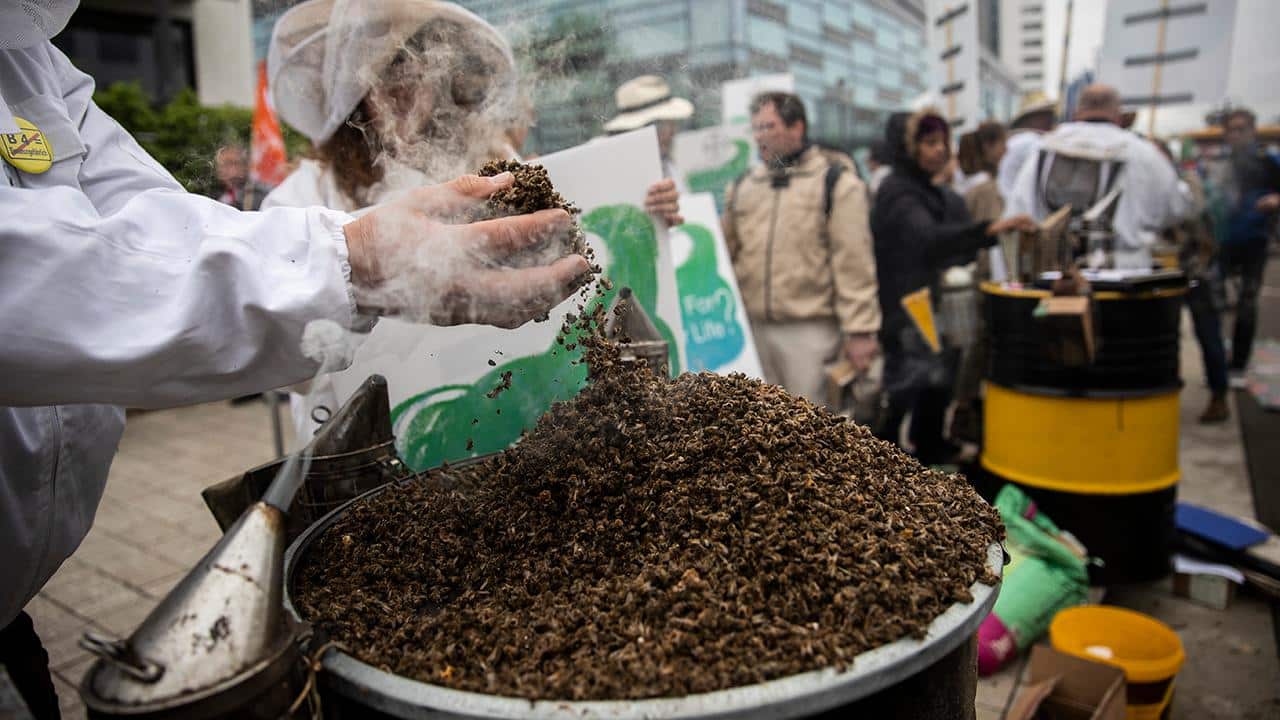 Protester shows dead bees that died by pesticides during a protest prior to the shareholders meeting of German chemicals and pharmaceuticals conglomerate Bayer AG on April 26, 2019 in Bonn, Germany. Maja Hitij / Getty Images

Despite lower applied amounts of pesticides in U.S. agriculture, their toxicity to non-target species including honeybees more than doubled in a decade, according to a new study.

The findings by a team of researchers from Germany’s University Koblenz-Landau were published Friday in the journal Science.

“We have taken a large body of pesticide use data from the U.S. and have expressed changes of amounts applied in agriculture over time as changes in total applied pesticide toxicity,” explained lead author Ralf Schulz, professor for environmental sciences in Landau, in a statement.

“This provides a new view on the potential consequences that pesticide use in agriculture has on biodiversity and ecosystems,” he said.

The researchers looked at changes in the use of 381 pesticides from 1992 to 2016 and analyzed toxicity impacts on eight non-target species groups, drawing data from the U.S. Geological Survey and Environmental Protection Agency. They used the EPA’s threshold values to determine “total applied pesticide toxicity.”

Lower amounts of pesticides have been applied, which brought decreased impacts on vertebrates, the scientists noted. But the same can’t be said for non-target species including aquatic invertebrates like crustaceans and pollinators like bees, who faced a doubling in toxicity between 2005 and 2015 — a shift the authors put on increases in the use of pesticides called pyrethroids and neonicotinoids.

Also troubling is that an increase in herbicide toxicity has been on the rise as well, the scientists said, with the biggest impact seen on terrestrial plants. The study pointed to increased toxicity in the widely cultivated genetically modified crops in the U.S. of corn and soybean.

Schulz said the findings “challenge the claims of decreasing environmental impact of chemical pesticides in both conventional and GM crops and call for action to reduce the pesticide toxicity applied in agriculture worldwide.”

The study was released amid continued concerns, both nationally and international, about wide-ranging adverse ecological impacts of neonicotinoids, or neonics, as they’re sometimes called, especially amid a global decline in insect numbers that threatens humanity’s future.

As Philip Donkersley, a senior research associate in entomology at Lancaster University, wrote this month at The Conversation:

Since their introduction in the late 1980s, robust scientific evidence has emerged to suggest these chemicals impair learning and memory, foraging behavior, and pollination in bees. The E.U. banned neonicotinoids in 2019, and while the U.K. government pledged to follow suit, it granted a special exemption for sugar beet farmers to use the neonicotinoid thiamethoxam in January 2021. Thankfully, it wasn’t used.

Because honeybees don’t spend much time on the ground, environmental risk assessments for neonicotinoids often neglect to consider how exposure to these chemicals in the soil affects all pollinators. But in a landmark study published in Nature, researchers have shown how neonicotinoids affect bees not just by accumulating in the plants pollinators visit, but in the ground where most wild bees build their nests.

Evidence suggests neonics’ impacts go well beyond bees, including possibly to mammals like deer who inadvertently consume them.

As Civil Eats reported last month, the concerns are prompting continued demands for U.S. regulators to take action to curb or ban use of neonics.

Daniel Raichel, a staff attorney at the Natural Resources Defense Council, told the outlet: “It’s a bee issue for sure, but really, it’s an ecosystem issue. It’s an everything issue.”