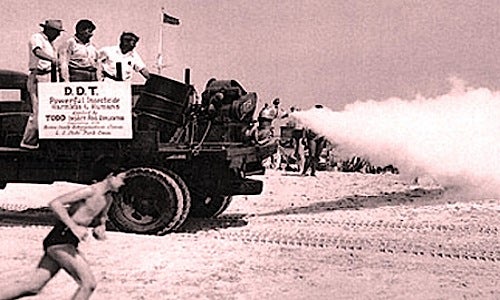 Scientists have known for more than 40 years that the synthetic pesticide DDT is harmful to bird habitats and a threat to the environment.

Now researchers at Rutgers University say exposure to DDT—banned in the U.S. since 1972 but still used as a pesticide in other countries—may also increase the risk and severity of Alzheimer’s disease in some people, particularly those over the age of 60. 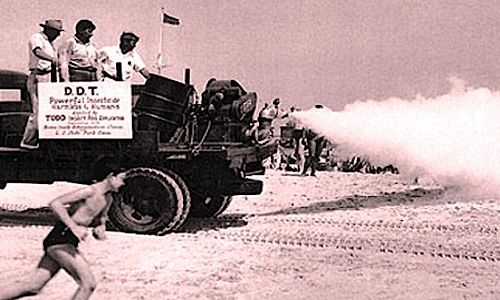 The pesticide DDT has been banned in the U.S. since 1972, but is still used on crops and livestock in some parts of the world.

In a study published online Tuesday in JAMA Neurology, Rutgers scientists discuss their findings in which levels of DDE—the chemical compound left when DDT breaks down—were higher in the blood of late-onset Alzheimer’s disease patients compared to those without the disease.

DDT was used in the U.S. for insect control in crops and livestock and to combat insect-borne diseases like malaria. It was introduced as a pesticide during WWII. Rutgers scientists (the first to link a specific chemical compound to Alzheimer’s disease) believe that research into how DDT and DDE may trigger neurodegenerative diseases, like Alzheimer’s, is crucial.

“I think these results demonstrate that more attention should be focused on potential environmental contributors and their interaction with genetic susceptibility,” said Jason R. Richardson, associate professor in the Department of Environmental and Occupational Medicine at Robert Wood Johnson Medical School and a member of the Environmental and Occupational Health Sciences Institute. “Our data may help identify those that are at risk for Alzheimer’s disease and could potentially lead to earlier diagnosis and an improved outcome.”

Although the levels of DDT and DDE have decreased significantly in the U.S. over the last three decades, the toxic pesticide is still found in 75 to 80 percent of the blood samples collected from the Centers for Disease Control and Prevention for a national health and nutrition survey. This occurs, scientists say, because the chemical can take decades to breakdown in the environment. In addition, people may be exposed to the pesticide by consuming imported fruits, vegetables and grains where DDT is still being used or eating fish from contaminated waterways.

In the Rutgers study, conducted in coordination with Emory University Alzheimer’s Disease Research Center and the University of Texas Southwestern Medical School’s Alzheimer’s Disease Center, 74 out of the 86 Alzheimer’s patients involved (whose average age was 74) had DDE blood levels almost four times higher than the 79 people in the control group who did not have Alzheimer’s disease.

Patients with a version of ApoE gene (ApoE4), which greatly increases the risk of developing Alzheimer’s, and high blood levels of DDE exhibited even more severe cognitive impairment than the patients without the risk gene. Brain cell studies also found that DDT and DDE increased the amount of a protein associated with plaques believed to be a hallmark of Alzheimer’s disease.

These sticky amyloid proteins—which may form in regions of the brain involved in memory, learning and thinking—break off and clump together in the brain and increase as the disease progresses. This new research is important, Richardson says, because it suggests that DDT and DDE may directly contribute to the process of plaque development.

“We need to conduct further research to determine whether this occurs and how the chemical compound interacts with the ApoE4 gene,” Richardson said.

Although the exact cause of Alzheimer’s disease, with which five million Americans are now suffering and millions more expected to fall prey with the graying of the Baby Boom Generation, is not known, scientists believe that late-onset Alzheimer’s may be linked to a combination of genetic, environmental and lifestyle factors. Much of the research into Alzheimer’s and other neurodegenerative diseases has mostly been centered on finding genetic connections, Richardson explained.

“This study demonstrates that there are additional contributors to Alzheimer’s disease that must be examined and that may help identify those at risk of developing Alzheimer’s,” Richardson said. “It is important because when it comes to diagnosing and treating this and other neurodegenerative diseases, the earlier someone is diagnosed, the more options there may be available.”

Scientists Ananya Roy, Stuart Shalat and Brian Buckley at the Environmental and Occupational Health Sciences Institute at Rutgers, Allan Levey and Maria Gearing at Emory University School of Medicine, and Dwight German at the University of Texas Southwestern Medical Center contributed to the research.