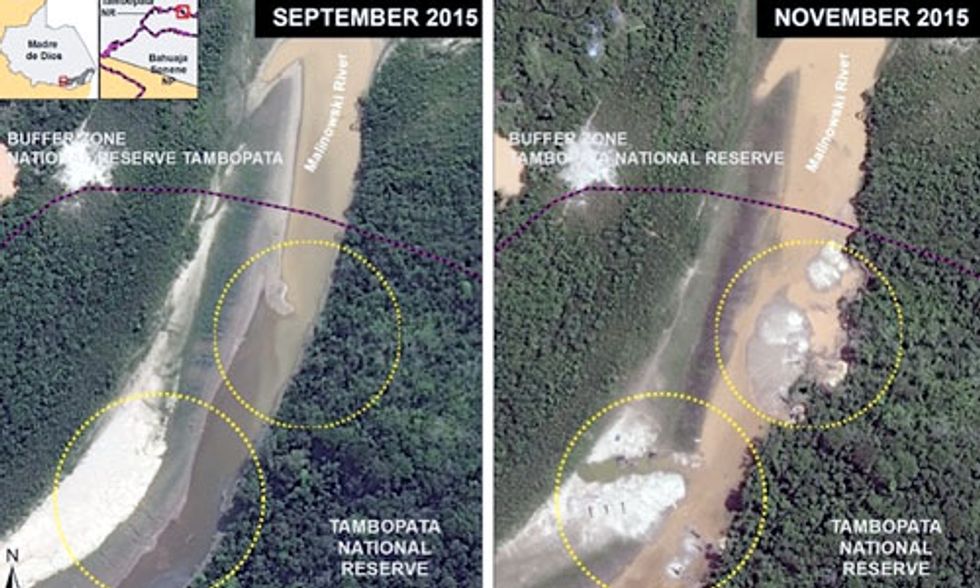 The South American country, home to 13 percent of the iconic Amazon rainforest, is the sixth largest gold producer in the world. Covert mining for the luxury metal, however, has been a major cost to the environment and human health.

According to Mining.com, illicit gold production in Peru increased fivefold since 2012, and it is estimated to provide 100,000 direct jobs in the country, 40 percent of which are in the Madre de Dios region in southern Peru.

Studies from Stanford University and other institutions have detected high levels of mercury in Peru's citizens, fish and waterways.

The International Business Times noted that thousands of miners, who are working illegally in the region, use mercury to extract gold from the rivers.

"Some 15 percent of the production is believed to be extracted illegally with little to no measures taken to protect the environment," the publication writes.

According to Reuters, miners dump 40 tonnes of mercury into Amazonian rivers annually, destroying more than 100,000 hectares (247,105 acres) of rainforest in the Madre de Dios region, the environment ministry said.

As for human health, the toxic chemical can affect vital functions of the nervous, digestive and immune systems, and on lungs, kidneys, skin and eyes.

Environment minister Manuel Pulgar-Vidal said during a news conference that 41 percent of the population—about 50,000 people—in Madre de Dios are exposed to mercury pollution.

"The consequences of mining activity in Madre de Dios will be with us for the next 80 years, and that must be fought at its roots," he said. "Declaring the emergency brings action, hospitals, food such as uncontaminated fish, among other things."

Indigenous and rural communities are particularly vulnerable since they consume the fish they catch from the river. Survival International writes that "up to 80 percent of the recently contacted Nahua tribe have been poisoned with mercury" and have been suffering from acute respiratory infections and other health problems since they were contacted.

Despite Peruvian President Ollanta Humala calling a state of emergency on Monday, Survival International says that the government has known about the contamination since 2014 and has done little to address the problem.

According to the Associated Press, the government is sending hospital boats to help treat people living in the affected area. Authorities are also trying to crack down on illegal mining.

"Consumers need to be aware of the human and environmental costs of the gold in their jewelry boxes and smart phones, and demand accountability from mining companies and retailers," Sampat said.

‘The Beast Continues to Burn Out of Control’