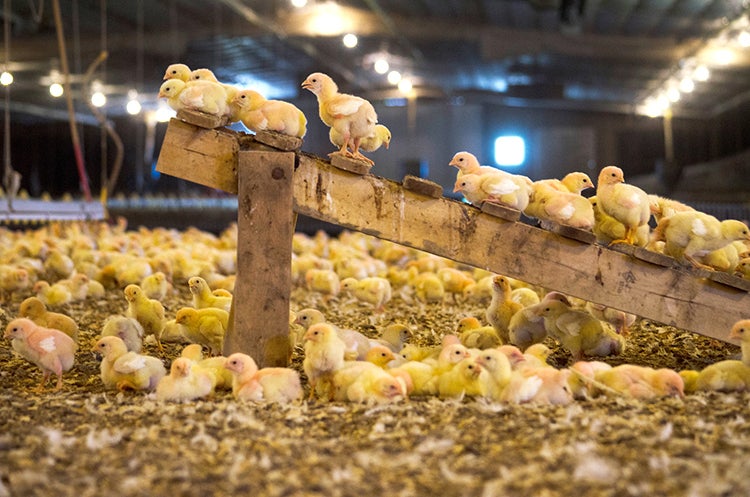 Craig Watts raised broiler chickens for Perdue for more than two decades—until he let the animal welfare group Compassion in World Farming (CIWF) film inside one of his barns in 2014. As a result, Americans got an HD look at how their favorite meat is raised.

In the video, which has been viewed nearly 2.4 million times on YouTube, birds are shown unable to stand under their own weight, feathers burned off their stomachs by the noxious waste layered on the ground. The New York Times columnist Nicholas Kristof wrote that “as a farmboy who raised small flocks of chickens and geese, I never saw anything like” the stomach sores that appear common in Watts’ barn. 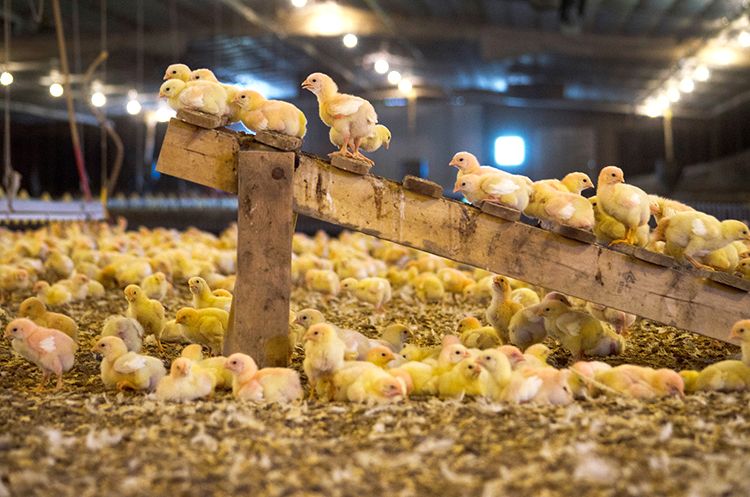 Perdue announced on Monday one of the most ambitious animal welfare plans in the industry.Photo credit: Perdue

Nearly two years later—two years that saw Perdue announce a “No Antibiotics Ever” plan for its poultry operations and Watts both leave his contract and file a lawsuit against the company—Perdue announced Monday one of the most ambitious animal welfare plans in the industry.

Based on the Five Freedoms endorsed by many animal welfare groups, Perdue’s Commitments to Animal Care: 2016 and Beyond lays out plans to create more space in poultry barns, increase the amount of time and space birds have for exercise and “play” and move away from the kind of rapidly growing modern breeds that result in birds that cannot withstand their own weight. Eventually, all birds will be anesthetized before slaughter.

“There has been definitely criticism of Perdue from various fronts,” Julie DeYoung, a spokesperson for Perdue, said in an interview with TakePart.

“So as we studied and tried to learn from those and began talking with our critics a little bit more completely about that, they encouraged us to be more public” about the changes the company is making. For example, while Perdue started to cut back on antibiotics in 2002, it only started talking publicly about the issue in the last couple of years—a far greater interval than it took to engage with consumers over the conditions chickens live in. In addition to raising questions about animal welfare, DeYoung said that undercover videos “reminded us of how important farmers are in our equation.”

Compassion in World Farming’s Leah Garces is one of the critics Perdue has been engaging with more. Last winter, she was invited to meet with Bruce Stewart-Brown, who oversees food safety and animal welfare issues for the company. On Monday, she called Perdue’s new animal welfare standards “a good first step” but said that “time will tell what it means for the birds.” Last year, Perdue raised 676 million chickens.

While there are questions over timelines, implementation and auditing—the kind of nitty-gritty concerns about large-scale corporate change that follow a feel-good press announcement—Garces, U.S. director for CIWF, was clear that she sees this as significant for the industry. “You have to recognize that no other company has done a policy like this,” she said. Other animal welfare groups, including the Humane Society of the United States and Mercy for Animals, have lauded the announcement.

But where Garces sees progress, the man on the other side of the 2014 undercover video and his legal team are less than pleased.

“I don’t want to outright say they’re liars,” said Amanda Hitt, director of the Food Integrity Campaign at the Government Accountability Project, which is helping Watts with his lawsuit against Perdue. “But I don’t believe that they’re necessarily telling the truth until we see some action and change. To suggest that they give a s–t about these birds or these farmers just belies what I’ve learned over the last couple of years representing Craig and other farmers.”

Watts didn’t respond to a request for an interview made through GAP, but Hitt said he is not happy with the announcement. Part of the reason he wanted the world to see the conditions his birds were living in, Watts said in 2014, is that those were the conditions that Perdue mandated—and that he was unable to implement changes that would have made the chickens’ lives better. But at the time the video was released, Perdue said it showed that Watts was not following protocol and was himself responsible for the mistreatment of the chickens.

Perdue’s DeYoung said that changing the company’s relationship with its contract farmers—who put up their own money to build and maintain chicken houses but do not own the birds or the feed—could be a part of the overall animal welfare improvement process. Contracts are traditionally built around concerns of production and efficiency, DeYoung said, but the company now provides bonuses for farmers who follow Perdue’s U.S. Department of Agriculture process–verified poultry care standards. Going forward, the company wants to figure out other ways to “connect animal care with pay and incentives,” DeYoung said. In addition to bonuses, “we are talking about ways we can, perhaps contractually, we can change the relationship.”

Perdue is looking to Niman Ranch, which it purchased last year, for ways to improve relationships with farmers. (Niman ranchers are contracted to raise animals but are guaranteed a minimum price to protect the farmers’ overhead, earn a premium price over the industry standard and receive other financial support from the company). While it’s unclear how its poultry farmer contracts will change, Perdue is willing to widely adopt the best practices it learns from smaller companies like Niman that it acquires.

When Perdue bought Coleman Natural Foods, which produces organic and antibiotic-free poultry, in 2011, DeYoung said there was an assumption at Perdue that producing organic chickens “would mean less efficiency or less productivity, but that was not the case.” Some of the changes that will be implemented in the animal welfare overhaul are based on Perdue’s organic poultry production “that will allow us to produce birds that are still productive and work for us from a business perspective as well.”

While some changes have been a function of learning from other companies and some have been precipitated by consumer demand and very public forms of criticism, others are a matter of necessity, according to Garces. Raising birds in cramped, enclosed and dirty environments? “That’s fine when we have antibiotics holding the whole thing together,” she said. “But the train has left the station for antibiotics.” Without routine low doses of antibiotics, birds raised in such conditions are getting sick and passing disease to one another. Mortality rates are climbing up across the board after a decade of decline.

“What we’ve found … is that we needed to look closer at the animal husbandry practices in order to be successful without antibiotics,” DeYoung said.

While Perdue’s announcement gives hope to animal welfare organizers like Garces that we can see a future where birds are no longer being crushed under their own weight and broilers can move freely in natural light, the immediate changes from Perdue are going to be small. By the end of 2016, Perdue will retrofit 200 of its chicken houses with windows—just 3 percent of its 6,000 houses across the country.