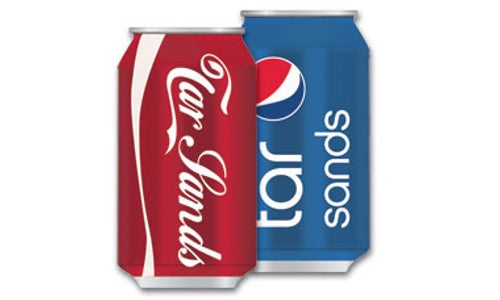 Environmental groups Sierra Club and ForestEthics targeted Coke and Pepsi in two full page USA Today print ads yesterday for their use of oil from tar sands in corporate car and truck fleets. The ads are part of a national campaign to eliminate the use of oil from Canadian tar sands by corporate car and truck fleets. The groups are targeting the soda industry with the “Tastes Like Tar Sands” campaign, which has generated more than 75,000 messages to soda industry executives. 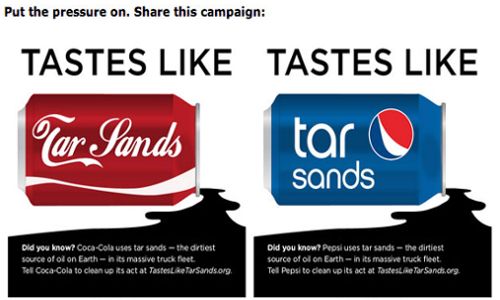 As the advertisements explain, shipping soda to store shelves takes a lot of oil; in fact the soda industry is one of the biggest oil users in the U.S. Despite promises of sustainability, Pepsi and Coke are using one of the dirtiest oils on Earth—carbon-intensive Canadian tar sands. This secret ingredient hurts our air, our water, wildlife and all of us. The tar sands are not only poisoning local communities where they’re extracted and refined, they’re also a major source of carbon pollution.

Nineteen major U.S. corporations have already made public commitments to try and eliminate oil derived from tar sands and have made significant progress in eliminating this dirty fuel wherever possible. It’s time for Pepsi and Coke to publicly commit to move away from using toxic tar sands oil. Our health, our environment, our climate and our kids deserve it.

“Coke and Pepsi are working on sustainability, but with 100,000 cars and trucks on the road the soda industry need to take major steps in reducing their oil use and eliminating their use of the world’s dirtiest sources of oil: including tar sands,” says Michael Marx, Sierra Club Beyond Oil campaign director.

“Major companies like Coke and Pepsi cannot afford to be associated with some of the most toxic oil on the planet,” says Todd Paglia, ForestEthics executive director. “The customer is always right, and customers want companies to do the right thing when it comes to our environment, our climate and our health.”